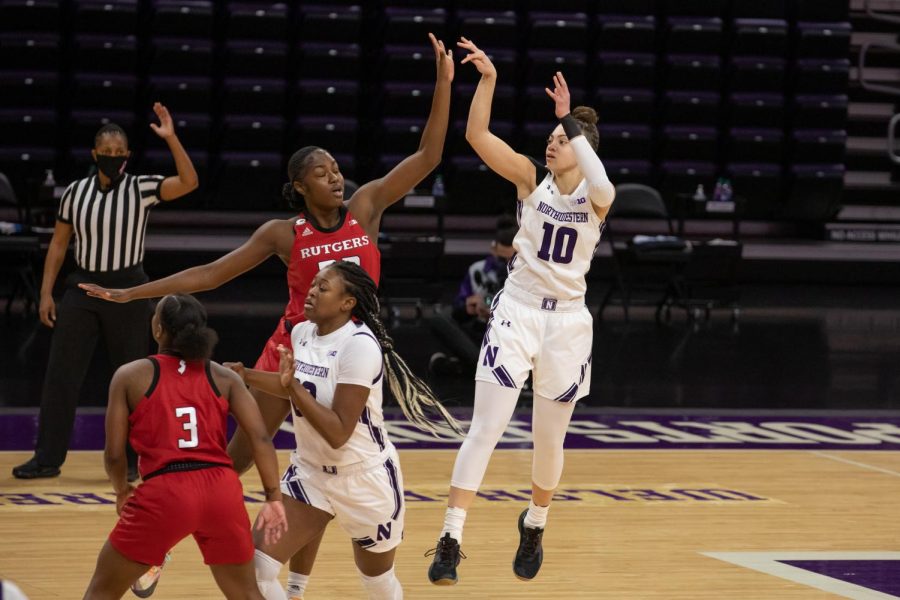 Lindsey Pulliam pulls up for her signature jumper against Rutgers. She scored 8 points Thursday afternoon.

Northwestern followed up one of its worst shooting halves in recent memory with a full game of it. Four days after the Wildcats (11-4, 9-4 Big Ten) sank just six shots in the third and fourth quarters against Michigan State, squandering a 19-point lead before coming back to win in the final seconds, they put up a measly 54 all game against Rutgers. With it, a fourth loss on the season.

Rutgers (7-3, 3-3 Big Ten) came to Welsh-Ryan Arena to face the Wildcats for their second game back after a five week hiatus due to a surge of COVID-19 cases within the program.

“We just couldn’t get the ball to drop,” coach Joe McKeown said of the Cats’ shooting effort. “It’s frustrating but Rutgers is a really good team defensively.”

The main flaw in NU’s game was a lack of shooting early from senior guard Lindsey Pulliam and junior guard Veronica Burton. The Cats are known for getting offensive contributions from a variety of players. But one of the only ones knocking down shots in the first half was senior guard Jordan Hamilton.

After exiting Sunday’s game against the Spartans fourteen minutes early due to injury, Hamilton came alive early against Rutgers, playing a key role on both ends of the court.

In the first quarter, she went 2-for-2 behind the arc and tied Burton for the team lead in steals.

While Burton and Pulliam were lacking their usual shooting dominance — combining for just three points in the first half — Hamilton led the offensive charge, keeping the Cats in the game each time Rutgers tried to expand its lead.

The guard from Frisco, Texas demonstrated her senior leadership this afternoon against an experienced Rutgers team, especially against senior guard Arella Guirantes. Last year, Guirantes averaged around 30 points per game. On Thursday, Hamilton kept her to just eight points in the first half.

Hamilton was the only player to make any three point attempts in the first half — and she made all three of the shots she took. But the Wildcats play best when the entire team is firing on all cylinders. That didn’t happen Thursday.

“We were not able to penetrate like we normally do,” said McKeown. “They took away some of our driving efforts which made a big difference.”

The second half of the game showed signs of a resurgence for the Wildcats when Burton released a smooth 3-point shot that swished right into the net. As if a light switch turned on, Pulliam made a jaw dropping shot from behind the arc minutes later.

But the late shooting effort needed to be more accurate in order to fend off the Scarlet Knights’ onslaught. Guirantes, senior forward Tekia Mack, and freshman guard Diamond Johnson still made shots from all areas of the floor to expand Rutgers lead.

Even though Hamilton, junior guard Sydney Wood and freshman forward Paige Mott ended the night in double digits, Burton’s and Pulliam’s extremely quiet shooting performance was a huge factor in the Wildcats’ loss. They combined for just 15 points in the effort.

For the last three minutes, Rutgers took complete control of the game defensively. They forced Northwestern into shot clock violations and stifled offensive possessions with potential.

“Moving forward, we got to keep working on how we execute and fighting back if a team goes on a run and coming back with a run of our own,” Wood said.

— Women’s Basketball: A tale of two halves for Northwestern’s offense

— Women’s Basketball: Lindsey Pulliam secures the 63-60 win for the Cats against Michigan State