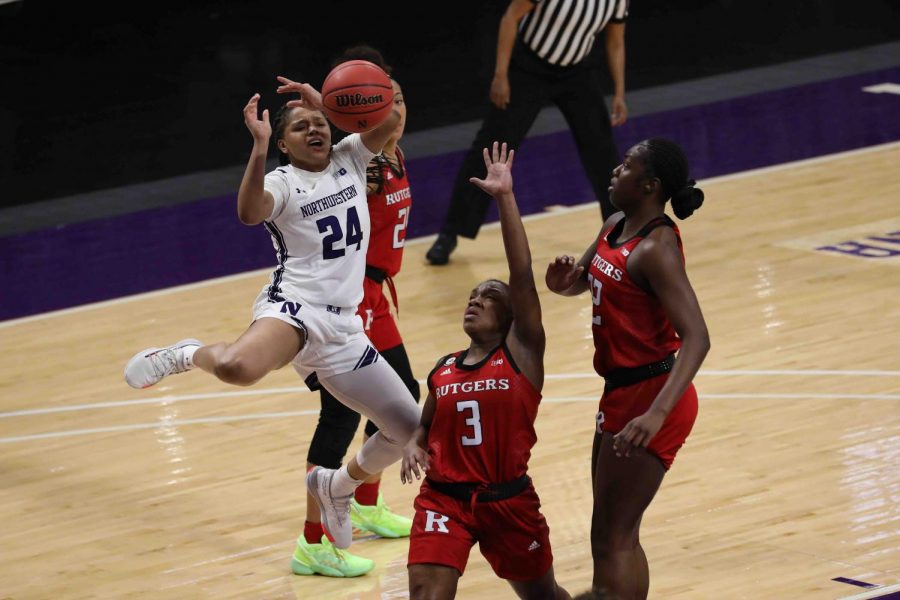 Jordan Hamilton has the ball knocked out of her hand. The senior led the Wildcats with 13 points in NU’s loss to Rutgers.

Mere minutes after the final buzzer sounded, mercifully bringing an end to No. 21 Northwestern’s 70-54 loss to Rutgers, junior guard Veronica Burton was back on the floor at Welsh-Ryan Arena, putting up free throws while coach Joe McKeown and fellow junior guard Sydney Wood addressed the media.

It was that kind of afternoon for the Wildcats — the kind that left them disappointed in themselves and eager to get back to work right away.

“We had some momentum, and they made a couple big plays,” McKeown said. “We just couldn’t get the ball to drop. Rutgers is a really good defensive team, we knew that coming in, but we gave up second shots, we gave up some open looks.”

NU (11-4, 9-4 Big Ten) and the Scarlet Knights (7-3, 3-3) went back and forth for most of the game. Neither team led by more than six until the fourth quarter, and when freshman forward Paige Mott — who had a career day with 12 points and six rebounds — made a layup with just under six minutes left, the Cats trailed by just two.

But they would be outscored by a stunning 17-3 margin the rest of the way. Tekia Mack, Rutgers’ 6-foot-1 wing who finished with 16 points and 13 rebounds hit a three-pointer as the shot clock wound down on the Scarlet Knights’ next possession. NU was never that close again.

Mack scored nine of her 16 in the fourth quarter as Rutgers quickly pulled away. The Cats missed their last 11 shot attempts and 13 of their final 14, not hitting from the field for the final 4:22. Their two leading scorers, Burton and Pulliam, were a combined 4-for-23 on the game.

“One thing that hurt us tonight was we were not able to penetrate like we normally do, and they took away some of our driving lanes,” McKeown said. “It made a big difference.”

The Scarlet Knights’ length not only bothered NU offensively; it also hurt the Cats on the boards. Through three quarters, Rutgers was out-rebounding NU 27-14, including a 16-6 edge on the offensive glass. The final margin was a bit closer, but that was mainly due to the Cats forcing up several hurried shots late in a futile attempt to stop the Scarlet Knights’ big run.

Despite Mott’s big game, NU’s struggles on the glass further highlighted the absence of junior forward Courtney Shaw, who has missed the last five games with a lower-body injury. With Shaw out, the Cats have relied even more heavily on their guards.

Wood and senior Jordan Hamilton were both solid on Thursday — Hamilton led NU with 13 points, including a 3-for-4 performance behind the arc — but subpar production from Burton and Pulliam combined with an inability to overcome Rutgers’ size ushered in a rather ugly defeat.

The Cats currently sit in fifth place in the Big Ten, but they have a big opportunity to gain some ground on Sunday at No. 12 Ohio State, a team they beat by 12 in Evanston just 10 days ago.

“(Rutgers’) length was a big factor,” Wood said. “They’re definitely one of the longest and most aggressive defenses in the league. A lot of it came down to how we executed down the stretch as well. Moving forward, we have to keep working on how we execute our plays according to what the defense does.”

— Women’s Basketball: Lindsey Pulliam secures the 63-60 win for the Cats against Michigan State