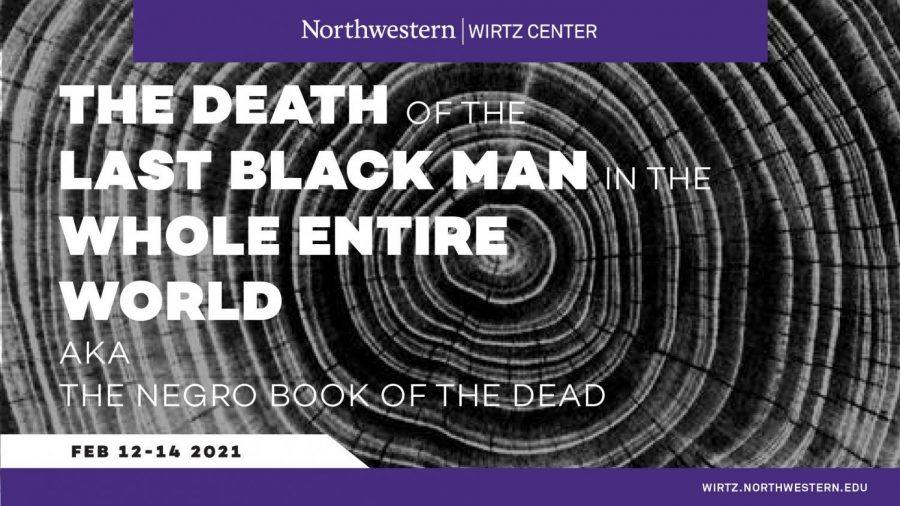 Courtesy of the Wirtz Center

“The Death of the Last Black Man in the Whole Entire World AKA the Negro Book of the Dead,” originally written by Suzan-Lori Parks, is about Black love, intergenerational pain and Black joy. It centers around the last Black man in the world, who dies over and over again and explores archetypes of Black America through piercing insight and raucous comedy.

When first-year MFA directing student Manna-Symone Middlebrooks was asked to pitch and direct a play for the Wirtz Center, she chose a play about Black love, intergenerational pain and Black joy.

“The Death of the Last Black Man in the Whole Entire World AKA the Negro Book of the Dead,” originally written by Suzan-Lori Parks, is the third installment in the “Visions and Voices, a Black Playwrights’ Reading Series.” It will be available on-demand Feb. 12 to Feb. 14 with free tickets for all Northwestern students.

The play centers around the last Black man in the world, who dies over and over again and explores archetypes of Black America through piercing insight and raucous comedy. It includes characters drawn from ancient history and inspired by food, such as Ham, Yes and Greens Black-Eyed Peas Cornbread, and Before Columbus. Instead of following a traditional Western linear form of storytelling it uses the repetitive structures of jazz and call-and-response in both plot and dialogue.

Second-year MFA student Al’Jaleel McGhee said American culture has embraced a certain way to tell stories that are very Eurocentric in how it dictates plot, dramatic structure and rising and falling action.

“When you encounter a story that is not that, it gives you a pause for a second and you have to step back,” McGhee said. “This script gives you all the pause in terms of the language and the pacing, and even the subject matter.”

Since the play was done over Zoom, Middlebrooks said she spent a long time thinking about how to direct it from an “ensemble approach.” Middlebrooks said the play’s writer talks about her language as a physical act with a full body experience, making it challenging to execute over Zoom.

Despite these obstacles, Middlebrooks said the actors were able to create some “really great and powerful moments” through the screen.

“I’m encouraging the actors to approach the Zoom screen or their cameras like a porous membrane so that we could pass energy to and from each other and get some sense of community, some sense of fellowship,” she said. “If we were all working at doing that, hopefully some of that would have been felt through the screen.”

Al Heartley, the managing director of Wirtz Center and an actor in the play, said putting on this show is a direct response to the Black Lives Matter movement and the call for justice. Working with the crew to achieve this goal was a challenge to do virtually, but he said he was happy with the final product in the end.

Heartley said it was a pleasure to be able to act again, especially with both graduate and undergraduate students.

“It was exciting to be with a cohort of people and to develop a relationship, even virtually,” Heartley said. “We certainly all miss the in-person aspects of performing, but it doesn’t mean that we can’t try to recreate that.”