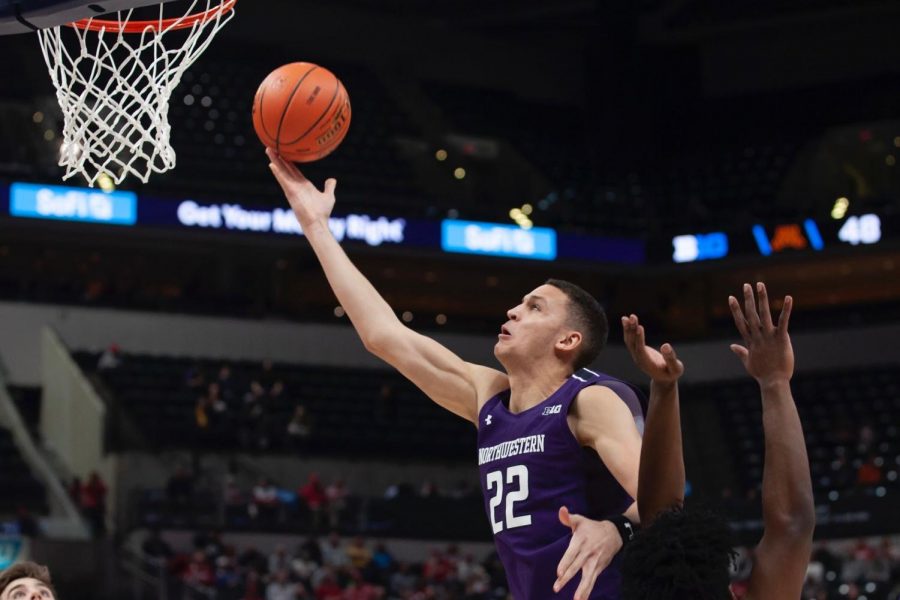 Northwestern played host to Indiana Wednesday at Welsh-Ryan Arena, looking to complete a season sweep of the Hoosiers and pick up its first win in nearly seven weeks on a somber day for the Wildcats program.

After 50 furious minutes, NU was unable to pull out its first victory in 46 days, falling to Indiana 79-76 in double overtime, despite a deep performance that recalled its early-season successes at times.

A nine-game losing streak stretched to ten. The Cats had leads of seven points in the final two minutes of regulation and six in the last minute of the first overtime period. At times a loss looked statistically improbable. They found a way.

The game was marked by an atmosphere of mourning; NU played without freshman guard Ty Berry, whose father, Tony Berry, died suddenly Tuesday night. Sophomore guard Boo Buie wore No. 3 in honor of his teammate, rather than his usual No. 0.

Both teams started slow offensively, with junior forward Miller Kopp’s three-pointer representing the only points for either team in the first 5:14. Redshirt sophomore Chase Audige then reeled off four straight points for the Cats, stretching the lead to 7-0 before guard Aljani Durham scored Indiana’s first points.

With the Hoosiers scuffling, NU received big early contributions by Audige, whose three-pointer with 8:12 to go gave the Cats a double-digit advantage of 18-7. After another Kopp three, Indiana turned the tables on the Cats with a 11-0 run, during which NU went 7:11 without scoring. Redshirt sophomore center Ryan Young laid the ball through the iron with :30 left, but Hoosiers forward Trayce Jackson-Davis responded with a jumper that was counted after a lengthy replay review to create the halftime margin of 23-20.

Indiana scored the first four points of the second half to take its first lead, but redshirt junior guard Anthony Gaines hit a three-pointer to put the Cats up 26-24. NU began a game of cat-and-mouse with the Hoosiers, going up by six, letting Indiana back within one, and bringing the lead back to six within a span of minutes.

Two unlikely stars stepped up for the Cats in the late going, as sophomore forward Robbie Beran and junior guard Ryan Greer each made big plays down the stretch. Beran hit a trio of three-pointers to deflate the Hoosiers when they came within three, four and four points midway through the second half, and Greer added seven points of his own as NU attempted to ward off Indiana.

The Hoosiers rallied to tie the game at 54 with :24 to play on a jumper from Durham, capping off a 7-0 run. The Cats then worked the clock, and after a succession of Indiana fouls and a last-second steal by Durham, the game plunged into overtime.

Nance opened the extra session by converting an and-one courtesy of his trademark hook shot. Franklin hit a free throw after being fouled, but another Nance jumper gave NU a 59-55 lead. After two more Franklin free throws, Audige sank a three-pointer off an assist from Buie, forcing Indiana coach Archie Miller to call a timeout as the Cats took a two-possession lead.

Franklin drained a three out of the timeout, and a chaotic sequence ended with an Audige layup with 1:22 left. After Indiana forward Jerome Hunter missed a three, the Hoosiers opted to play the free-throw game, successfully whittling the NU lead to two with :14 on the clock. Franklin then nailed a jumper to re-tie the game at 66-all with :01.4 left. Buie bricked a half-court shot at the buzzer, and thus the marathon continued.

Young laid the ball in to begin the second overtime, which Hunter countered with a pair of free throws. After a Franklin steal, Jackson-Davis hit his own layup to give the Hoosiers a 70-68 lead, which quickly evaporated courtesy of Greer, who fouled out shortly thereafter. Two free throws from guard Rob Phinisee once again swung the momentum toward Indiana, until Phinisee fouled Nance, who hit a free throw of his own.

Gaines proceeded to block a Franklin layup, but Audige missed a three-pointer, giving the Hoosiers the ball with :39.1 left. Hunter then buried a dagger three to seemingly finish the Cats for good. Audige, however, answered with his own three, and Indiana led by one with :07 on the clock.

NU fouled Durham, who hit both free throws. The Cats, however, couldn’t tie it up at the final horn, bringing its long afternoon to an end and extending its losing streak to 10.

Young, tapped for his second start of the season, saw 20 or more minutes for the third consecutive game as the Cats showed an increased willingness to feed him the ball in the post. His seven field goal attempts in the first half matched his season high in attempts for any game, and he finished with five field goals made on 11 attempts, his highest volume of shots taken since February 23, 2020 against Minnesota.

NU got some much-needed buckets from Beran in the first half, as he drained three three-pointers for the first time since hitting three against Chicago State on December 5, 2020. His 12 points represented his fourth double-digit effort of the season, and his biggest output ever off the bench. Beran started 14 of the Cats’ first 15 games before being removed from the starting lineup in favor of Young and Gaines.

— Men’s Basketball: After a rocky start, Pete Nance is living up to the hype. Now he’s a Big Ten problem.