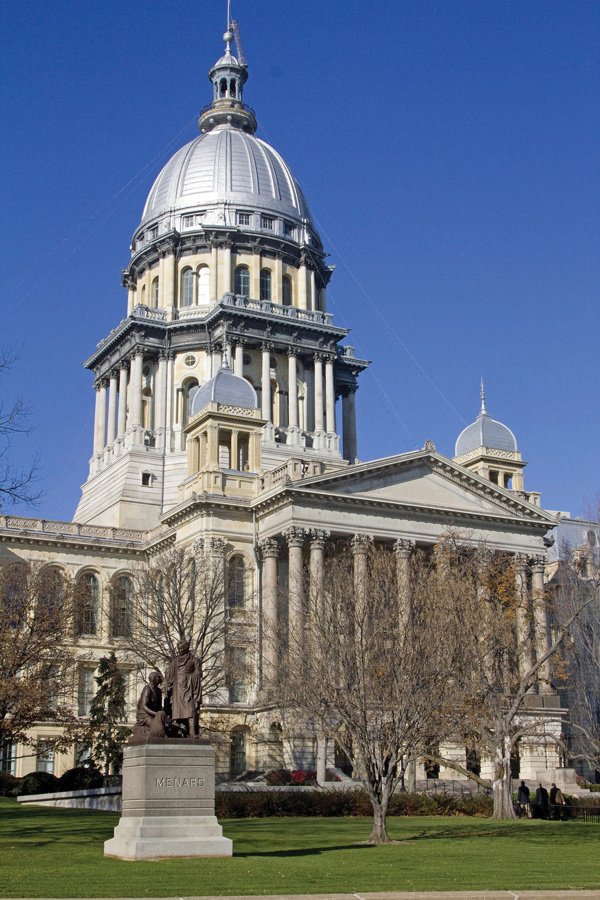 Illinois criminal justice reform groups say that reclassifying drug possession charges is a first step toward changing substance use from a criminal issue to a public health issue. They said they plan to propose a bill to achieve this in the 2021 legislative session.

After a “defelonization” bill failed to pass in the Illinois General Assembly, criminal justice reform advocates are pushing to reintroduce the proposal in 2021. On top of reclassifying low-level drug possession charges from felonies to misdemeanors, the defelonization bill would seek to divert people with substance use disorders from the criminal legal system.

Under current Illinois law, any possession of controlled substances, such as illicit drugs or certain medications without prescriptions, is a felony. House Bill 2291, proposed by the ACLU of Illinois with other civil rights groups in 2019, sought to change that by establishing quantity thresholds for possessing various substances that would result in misdemeanor charges rather than felonies. It also sought to establish diversion programs to direct people with substance use disorders to community-based treatment centers instead of prisons.

After the bill was rejected, advocates said they would continue to push for defelonization.

Defelonization was then part of conversations in January 2021 surrounding the Pretrial Fairness Act, but it was not included in the final version of the state bill, which awaits Gov. J.B. Pritzker’s signature.

“People making the decision within the legislature kept a pretty tight lid on what was going into the final package,” Ben Ruddell, a criminal justice policy attorney at the ACLU of Illinois, said.

Ruddell said the ACLU of Illinois and other groups plan to propose a new bill almost identical to HB 2291 in the 2021 legislative session.

Patrice James, director of community justice at the Shriver Center on Poverty Law, said the goal of defelonization is to shift the framing of substance use from a criminal justice issue to a public health issue.

Ruddell said the bill would offer people with substance use disorders the option of going to a community-based provider who would evaluate their needs and create a treatment plan. If the person chose to see the provider — regardless of whether or not they chose to take the recommended treatment steps — all criminal charges against them would be dismissed. Ruddell said he and other advocates don’t want diversion programs to function like probation or court supervision. Under the bill’s plan, he said people won’t be sent back into the criminal legal system if they make a mistake, or if they can’t take the recommended treatment path for any reason.

“It’s a journey to recovery,” Ruddell said. “It may take two years, it may take five years. A person does not benefit from being under criminal legal system control while they traverse that path.”

The proposal would also allow people who are currently serving sentences or have served sentences for low-level drug possession to petition courts to retroactively reduce their sentences or designate their prior convictions as misdemeanors.

James said she views the proposal as a path toward racial and gender justice.

According to a 2019 report from the Vera Institute of Justice, a nonprofit organization that researches criminal justice policy, Illinois’s prison population has increased by 158 percent since 1983. In 2017, Black residents were 7.9 times more likely to be incarcerated than White residents in Illinois. Indigenous residents were 1.4 times more likely.

The same report found that the number of women in Illinois prisons has increased 1,015 percent since 1980.

“When it comes to drug possession… it tends to be brown and Black communities that are most affected by the… legal ramifications,” Carolyn Murray, an aldermanic candidate in Evanston’s 5th Ward, said.

The Drug Policy Alliance, a nonprofit organization that supports criminal justice reform, found in 2018 the majority of women in federal prisons are serving time for drug possession charges. The report found the majority of these incarcerated women are mothers of minor children, and that these children often suffer negative consequences from family separation.

However, in January 2021 hearings where advocates proposed defelonization, some state representatives expressed concern that the proposal could lead to increased drug use throughout the state.

“Keeping this a felony is important to achieve the overall goal of getting people off of illegal substances,” state Rep. Patrick Windhorst (R-Metropolis) said at the hearing.

Ruddell said there is no evidence that incarcerating people for drug possession leads to lower levels of drug use.

According to the National Institutes of Health, incarceration alone does not adequately address substance use disorders. In 2010, the NIH found that 25 percent of people incarcerated for using drugs return to prison within three years of release. In many states, people with felonies face challenges finding jobs and reintegrating into their communities after release, potentially pushing them back toward substance use.

Advocates said defelonization is part of a larger movement away from punitive drug laws. Since 2014, California, Utah, Connecticut, Alaska and Oklahoma have all reclassified drug possession from a felony to a misdemeanor.

“I think we all agree rehabilitation is needed,” Bobby Burns, an aldermanic candidate in Evanston’s 5th Ward, said. “The question is, where does a felony help with that in any way?”