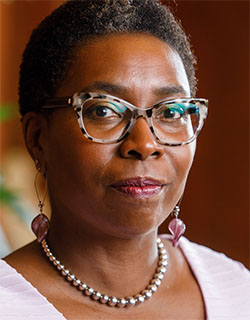 Coleman, who recently transferred from a similar position at Texas A&M, assumed the role on Feb. 1. Through statistics and an analysis of University goals, Coleman presented her goals and intentions for the position and advocated for community accountability.

Through the Office of Institutional Diversity, Coleman said she wants to strategically commit to inclusion, diversity, equity and accountability — a set of goals collated under the acronym IDEA.

Coleman said advocating for IDEA includes addressing large structural changes at the organizational level, changes within academics and the administration, changes in the climate and culture of the University, curricular adjustments and methods for assessing progress.

Coleman emphasized she sees equity as “beyond salary,” and encompasses climate and opportunities for growth. Coleman also highlighted the need for equitable advocacy for neurodiversity in students, faculty and staff at the University.

Communication lecturer Julie Marie Myatt asked what changes are being made at the admissions level to promote diversity. Myatt, who teaches in the theatre department, said she was “surprised” when she started at NU and despite ample conversations around diversity, she has not seen much change over her six years at the school.

“It seems like there’s a disconnect between the conversation and the admissions department,” Myatt said.

Coleman spoke briefly about reports of applications to NU increasing across the board, including from students of color, and then directed the question to Assistant Provost for Diversity and Inclusion Mónica Russel y Rodríguez. Russel y Rodríguez spoke of investments in diversity being made at the admissions and recruitment level, particularly to the hiring of a full-time “undergraduate admissions expert” in Native American and Indigenous student admissions.

Coleman said she plans to assume the role with the goal of being “relentlessly optimistic” while working to implement changes.

“Everything isn’t broken,” Coleman said. “We are doing extraordinarily good work at Northwestern.”