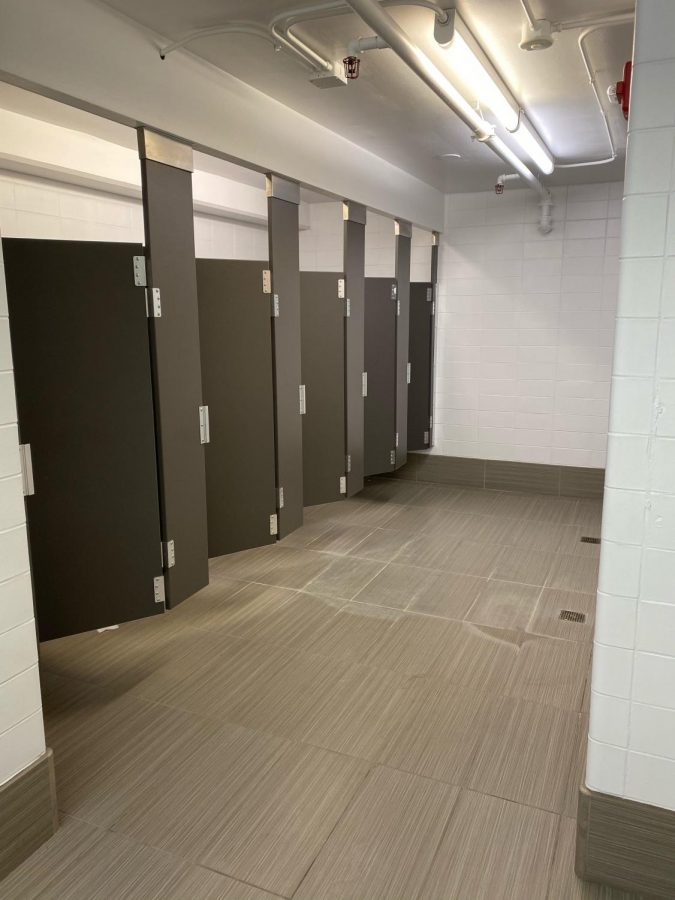 The fourth floor bathroom in Allison Hall. Menendie auditioned for Soul4Real there while avoiding people passing through.

Regenstein Hall of Music, the fourth floor Allison Hall women’s bathroom and a double in Willard Residential College have all been used for the same purpose: to audition for campus a cappella groups this quarter.

As students have returned to campus and adjusted to dorm life, many non-Bienen School of Music students face a critical challenge: with limited exceptions, Bienen practice rooms are only available to those who major in the school.

Weinberg freshman Lev Rosenberg is a new member of Northwestern’s Purple Haze a cappella group. Though his roommate said he would understand the need to sing in their double, Rosenberg still preferred to practice alone. Because their schedules sometimes require them to be in the room at the same time, he will occasionally have to sing when they are in there together.

For Rosenberg, the audition process was rigorous and long, requiring a lot of singing. Practices for Purple Haze, though, are relatively shorter — typically around two hours.

Even though he feels self-conscious singing within earshot of other floormates, he said the high concentration of musicians on South Campus and in his dorm makes him feel welcome when he sings in Willard.

But he said the trepidation that comes with being heard by other students will never fully go away.

“If I were in a place alone or my room at home, I would practice and sing all the time,” Rosenberg said. “Definitely annoying to my family.”

Communication freshman Robbie Matthew, a new member of Northwestern’s THUNK a cappella group, said he used a practice room in Regenstein for his audition. The room is a separate practice room system from the ones Bienen students use and is equipped with a piano, a music stand, a stool, window and a mirror.

In order to access the rooms, Matthew signed up online and now shares it with a cohort of other students. Matthew and the others coordinate on Google Calendar to split time for room usage.

Matthew said his room is not conducive to filming audition videos, and the blank wall in the practice room is more typical of auditions. Being in a practice room — albeit not in Bienen — is much more comfortable than his double. Even though Regenstein practice rooms are not soundproofed, he said he feels better surrounded by other people singing at the same time.

“Ideally I would practice in Bienen, because it’s very nice, new, soundproof and large,” he said. “Regenstein is really not that bad, for the time it is a great opportunity.”

McCormick freshman Darelle Menendie is a new member in Northwestern’s Soul4Real a cappella group. For her audition, Menendie didn’t film in a practice room or in her dorm room out of consideration for her roommate. Instead, she said she turned to her only other option with good acoustics: the bathroom.

Menendie said filming her audition there was embarrassing, but people were supportive and gave her many compliments along the process.

“The acoustics in the bathroom are really good, I was just nervous because people were walking in,” she said. “I was just filming as fast as I could then I left.”

Practicing on Zoom is virtually impossible, she said. Instead of live practices and performances, the group will be doing everything this year asynchronously.

However difficult the process is, Menendie said singing for Soul4Real is helping her “get out of her shell.” But Menendie looks forward to singing in a room, hopefully in the near future. She said being a part of Soul4Real is like a home away from home, with prebuilt friends she has already become close to.

— Put your dancing shoes back on: Northwestern performance groups in the pandemic