Swim & Dive: Athletes keep distancing going inside and outside the pool in a season of COVID-19 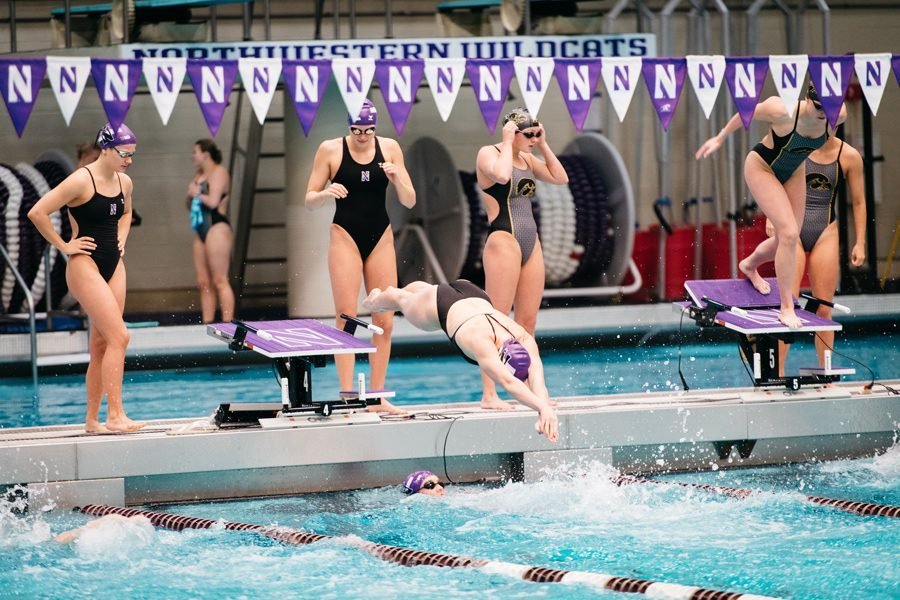 A Northwestern swimmer dives into the water.

After their season was put on hold in the fall due to COVID-19, Northwestern’s Swim & Dive team shifted its focus to the winter with new safety protocols to protect the safety of the student athletes. This quarter, they’ve competed in 11 Big Ten meets, fulfilling a season against all expectations.

With new COVID-19 protocols prohibiting team events prior to meets or after practice, athletes have needed to adapt accordingly through virtual team dinners and post practice hangouts over zoom.

Senior breast swimmer Sophie Angus said adjusting to less frequent interactions with her teammates has been a challenge.

“I think it’s just the little daily interactions with other people that were really lacking this season,” Angus said. “That’s the biggest thing I’ve missed because in the past I have been so close to all my teammates. ”

Even though the Cats can’t interact outside of the pool, their practices are mostly similar. The Olympic-sized pool at the Norris Aquatic Center gives the team enough space to block out six feet between lanes.

During practice, each member of the team must wear a mask until they dive. Coach Katie Robinson said the pool is cleaned with disinfectant after each practice.

Robinson said that student athletes are not encouraged to shower in the practice facility either, another restriction enacted this season.

Robinson said the team now gets tested 24 hours prior to loading NU’s two chartered team buses. Buses are limited to 50 percent capacity to ensure team safety. While on the bus, the coaches and athletes wear N-95 masks for extra precaution.

“We’re all looking out for (the athletes’) safety as coaches,” Robinson said. “We are all very conscious of everything and doing our best to keep everybody safe.”

NU’s Swim & Dive team is also prioritizing the mental health of its athletes in this unusual season. Since fall quarter, the team’s upperclassmen have been leading bonding events over Zoom and Facetime to build those strong connections outside of the pool.

“The adjustment to college can be tough, especially in the COVID pandemic, so we’re making sure they’re staying happy and mentally well so they can perform both academically and athletically,” Labuda said.