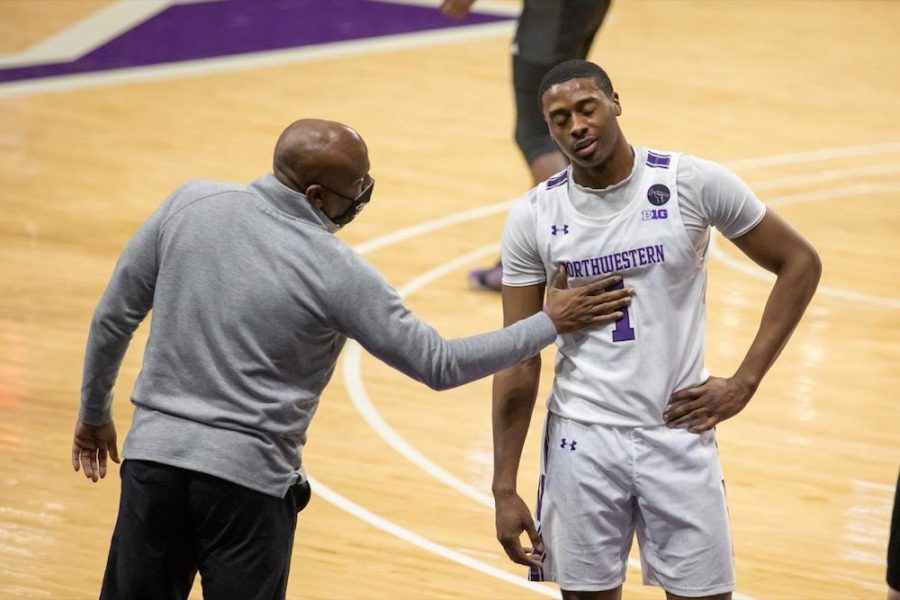 Chase Audige reacts in Northwestern’s Jan-31 loss to Rutgers. Audige led the Cats’ offensive effort with 18 points against Purdue, but the host Boilermakers held on to win 75-70.

For the past couple seasons, inexperience has been a key theme in Evanston. But on Saturday, the youth factor is what worked for Northwestern’s opponents.

No. 24 Purdue enjoyed double-digit scoring performances from four freshmen as the Boilermakers (13-7, 8-5 in Big Ten) handed the Wildcats (6-10, 3-9 Big Ten) their ninth consecutive loss in West Lafayette, 75-70. Despite 20 points from junior forward Pete Nance and 18 from sophomore guard Chase Audige, NU had 15 turnovers and struggled to make stops down the stretch.

After playing just one game in the past 14 days due to COVID-related concern on other programs, NU looked sluggish on the road coming off the tip. Purdue opened up an early 9-1 lead within the first four minutes and stifled the Cats’ offense.

An Audige three and Ryan Young layup battled the Cats back within a possession. The Boilermakers and Cats struggled on the offensive end — the teams combined to start 7-23 from the field and finished the first half with a combined 15 turnovers.

While Purdue relied on a 14-point first half performance from freshman guard Jaden Ivey to hold its lead, NU’s offense scored in three-point spurts. A streak of threes by sophomore guard Boo Buie almost put the Cats in the lead with eight minutes remaining in the second quarter. When Purdue boosted its lead to double-digits, NU answered with four three-pointers in a span of two minutes to enter halftime down just 35-32.

The Cats had their chances to retake the lead throughout the second half. While NU couldn’t sustain its hot three-point start, the Cats held the Boilermakers’ offense in check.

NU closed its gap to 55-51 on Miller Kopp’s first three-pointer of the game. But while the offense was just finding its rhythm, the Cats couldn’t make the stops they needed on the other end of the court. Purdue answered every NU bucket, and the Boilermakers turned a blocked shot by center Zach Evey into an emphatic dunk by guard Brandon Newman to extend its lead to nine and put the game out of reach in the closing minutes.

The Cats would pull within five by game’s end, but their season-defining losing streak extended to nine games. They’ll play for a chance to put it to bed Wednesday against Indiana.

With eight straight losses, the Cats had reason to expect changes from coach Chris Collins. On Saturday, Collins chose to reflect those changes through a  reshuffled starting lineup. Center Ryan Young and guard Anthony Gaines started in place of forward Robbie Beran and guard Boo Buie. Little-used freshman Matthew Nicholson even found a place in the rotation with a minute of first-half action. Young came through with a strong effort to the tune of 10 points and Buie got hot in the first half, but the Cats got just three points combined from Beran and Gaines and showed no tangible improvements from the new-look lineup.

NU’s 7-14 three-point performance in the first half was the primary reason the Cats were in contention going into the break. The most surprising aspect of that stat — NU’s most prolific three-point shooter wasn’t part of the fun. Junior forward Miller Kopp struggled, missing on his first five shot attempts with a couple of three-point misses. Kopp reached the scoreboard with a long two early in the second half as the Cats looked to move into the lead, but neither he nor his team could fully turn the corner. Kopp finished the day with just two makes in nine field goal attempts, a tough day for one of NU’s most consistent offensive performers.

NU was within striking range of their ranked rivals for most of the day, but the Cats’ struggles to protect the ball were too much to overcome. Purdue converted 15 NU turnovers into 18 points. While the Boilermakers cut down their turnovers in the second half after a sloppy first-half effort, turnovers plagued NU’s offense from start to finish. The foul disparity between the Cats and Boilermakers was similarly impactful, with Purdue making 23 of 24 attempts from the free throw line.