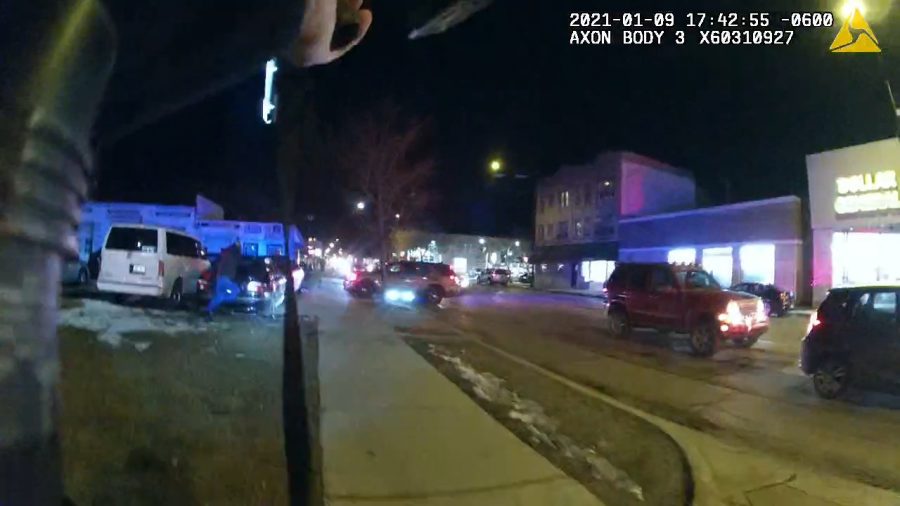 A scene from the Jan. 9 shooting outside Dollar General, captured by Evanston Police Department body camera footage. While video and audio from the night were released to press, other reports are being withheld due to ongoing investigations.

Questions regarding the suspect’s motives and coordination between the Evanston and Chicago Police Departments remain unanswered, more than three weeks after a series of deadly shootings that ended in Evanston.

There are no records of communications between Chicago and Evanston police about the shooter heading to Evanston, assistant city attorney Alexandra Ruggie wrote in response to a Freedom of Information Act request.

On the afternoon of Jan. 9, 32-year-old Jason Nightengale fired shots at numerous locations across Chicago, starting in Hyde Park, in a pattern police described as random. He shot seven people over the course of the afternoon, before Evanston police responded to calls of shots fired at CVS and ended the spree.

Nightengale fled across the street to the IHOP, 100 Asbury Ave, where he took Evanston resident Marta Torres hostage and shot her. He then ran across Asbury Ave and W Howard St toward the Dollar General, where he was shot and killed by officers.

Body camera footage released by EPD through the Freedom of Information Act indicates officers fired shots across W Howard St traffic toward Nightengale. It is unclear whether any bystanders were in danger of being hit in the shootout. At least one car parked on W Howard St appears to be occupied in provided photos. EPD declined to comment on any details regarding the officer-involved shooting, citing an ongoing investigation.

The night of the shooting, EPD sergeant Kenneth Carter said shots were fired at officers, the officers returned gunfire and Nightengale was struck. Carter said that Nightengale, a Chicago resident, may have had ties to Evanston.

Evanston police also released 911 calls and radio traffic from FOIA requests. Numerous 911 calls were made from the CVS, where Nightengale fired several shots that did not wound any bystanders.

One call came from a woman sheltering in the IHOP restroom as the situation in the restaurant unfolded.

“He has my coworker with him, right next to her,” she said. “Can someone stay on the phone with me? I don’t know if I should leave the bathroom.”

Both the CVS Pharmacy and the IHOP restaurant declined to comment.

Evanston police said the department did not receive any communications from the Chicago Police Department prior to the calls of shots fired at the CVS in Evanston. Reports indicate CPD was first alerted to Nightengale’s presence in Evanston by a ShotSpotter alert.

According to reporting from the Chicago Sun-Times, CPD officers in Rogers Park were alerted that Nightengale may have been nearby several minutes before shots were fired at CVS. The car he was using, which was stolen from another victim earlier that day, had supposedly been detected at 7600 N Sheridan a few blocks away.

According to released EPD radio traffic audio, officers from surrounding suburbs, including Skokie, Wilmette, Lake Bluff, Niles and Glenview, were called onto the scene for reinforcement after the shootings had taken place. CPD officers were also brought to the scene to help control traffic.

The North Regional Major Crimes Task Force and the Illinois State Police integrity unit are respectively conducting homicide and officer-involved shooting investigations into the events that took place that night. Incident and investigation reports will accordingly be withheld for the foreseeable future.

A fifth victim has died from injuries sustained in a series of deadly shootings that ended in Evanston last month.

Damia Smith, 15, was pronounced dead at the University of Chicago’s Comer Children’s Hospital at 3:57 p.m. Tuesday. Two other victims were in critical condition.

Torres, a 61-year-old teacher’s assistant at Evanston/Skokie School District 65, was the only Evanston resident to die from the incidents. She remained in critical condition for seven days at SaintFrancis Hospital, before passing away on Jan. 16.

“Marta was a thoughtful, generous, kind, loyal, sincere, strong, hardworking and special woman who radiated and impacted lives with an infectious, positive energy,” Torres’ family members said in a statement released by the Evanston Police Department. “She had an unforgettable joyous voice. She loved to read, write, dance, go to live concerts, and was a keychain and mug collector.”

— Woman shot, critically injured after being taken hostage in IHOP