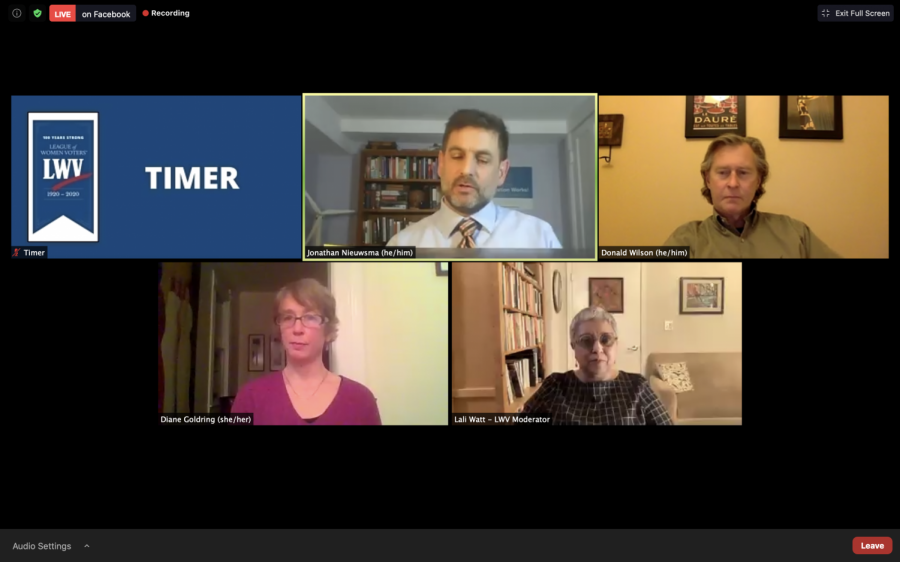 League of Women Voters of Evanston’s 4th Ward aldermanic candidate virtual forum. With all precincts reporting, Jonathan Nieuwsma and Diane Goldring are projected to advance to the April 6 general election.

Candidates clashed over the new Robert Crown Community Center and affordable housing proposals during a Wednesday 4th Ward aldermanic candidate forum hosted by the League of Women Voters of Evanston and the Evanston Public Library.

Incumbent Ald. Donald Wilson (4th) said aldermen should look at every issue through a racial equity lens — but candidate Diane Goldring, who pledged to lead Evanston to become more active in the Government Alliance on Race and Equity, said she found Wilson’s proclamation inconsistent with his past actions.

“It’s ironic to hear Alderman Wilson, after being a promoter of Robert Crown — which is what lots of people including myself think is one of the most inequitable projects and the most expensive project in Evanston history — talking about evaluating through an equity lens,” Goldring said.

Wilson said the Robert Crown Community center is equitable because its central location allows it to provide resources to much of the city.

“I think it is key when it comes to reparations that folks like Don and Diane and myself are not making the decisions on who’s eligible for the money and how it should be spent,” Nieuswma said.

Goldring advocated for a city-wide affordable housing plan, adding it is important to pressure developers to build more affordable units.

“Alderman Wilson said the development, for example, on Main Street, is not intended to be a family development,” Goldring said. “But why?”

In response, Wilson said families should be housed near schools and not “in a five story apartment building next to the train tracks.”

Nieuwsma agreed with Goldring, and said Evanston needs a city-wide affordable housing plan. He said the city needs to revise its inclusionary housing ordinance to increase the number of affordable units, and that the city should add an ordinance that forbids deconversion of two and three flats into single family homes.

“That’s very inequitable,” Wilson said. “What you’re doing is you’re effectively charging people who are renters a premium to subsidize other renters in the same building. So you have to be really careful in balancing that.”

To combat Evanston’s housing crisis, Wilson said he would invest in home maintenance programs, as well as programs that would help residents build generational wealth.

All three candidates said they support efforts to transform the 911 emergency response system by shifting resources from the Evanston Police Department and toward social services.

Nieuwsma emphasized transparency and civilian oversight. He suggested moving Freedom of Information Act responsibility for the police department to the city clerk’s office. Wilson said Evanston residents should use more discretion when choosing to call the police.

“We don’t need an officer with a gun to respond to every call,” Goldring said.