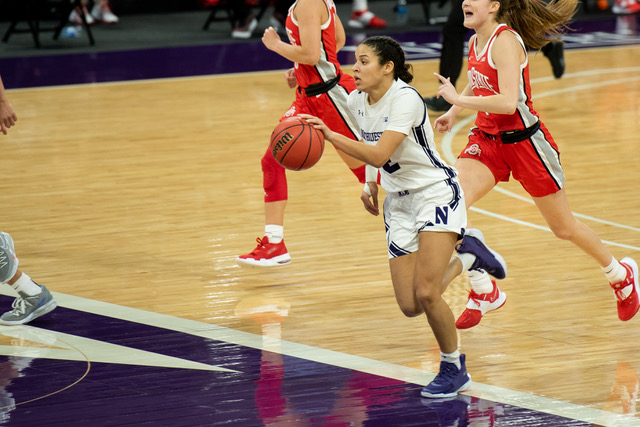 Northwestern needed to make a statement.

Losses to ranked Michigan and Indiana raised questions about whether the Wildcats, who just last season won their first Big Ten title in 30 years, could compete with the top squads in the conference.

The perfect opportunity to silence the doubters arrived Monday, as No. 11 Ohio State traveled to Evanston for a nighttime clash with No. 22 NU.

The Buckeyes, coming off massive wins against top-20 squads Maryland and Indiana, brought the third-best scoring offense in the Big Ten (84.6 points per game) and the conference’s second best rebounder in forward Dorka Juhász into Welsh-Ryan Arena.

But the Cats were well-prepared and seized their first victory over a ranked opponent this season.

Behind a stellar night from junior guard Veronica Burton and a dominant defensive effort that held Ohio State to its second-fewest points of the season, NU (10-3, 8-3 Big Ten) defeated the Buckeyes (10-2, 6-2 Big Ten) 69-57 to keep its hopes of a second-straight conference title alive and stake its place in the Big Ten’s top echelon.

“I thought it was our best defensive effort of the year,” coach Joe McKeown said. “When Ohio State made runs, I thought we did a great job of coming right back and scoring.”

After not receiving a finalist nod earlier today for the Nancy Lieberman Award, given to the nation’s point guard, Burton certainly played like an award winner tonight. She nearly earned a triple-double with 20 points, 15 rebounds and nine assists, garnering praise from McKeown who said she is “one of the best guards in the country.”

Senior guard Lindsey Pulliam added a double-double of her own with 15 points and 10 rebounds, and freshman forward Anna Morris came up with her best performance of the season in place of injured junior forward Courtney Shaw. She scored a career-high nine points and grabbed two rebounds.

On the defensive end, NU held the Buckeyes to below 60 points — only the second time OSU has failed to reach the marker this season. The team also outrebounded Ohio State 46-38 despite the absence of Shaw, the team’s leading rebounder.

The Cats’ defense was on display early as a strong interior presence led by Juhász — who finished with 11 points and 14 rebounds — was stifled by the purple-and-white blocking passing lanes and preventing open shots. As a result, the Buckeyes were forced to shoot mid-range and 3-point jump shots and misfired on many of them, resulting in a 20 percent shooting mark at the end of the first quarter.

NU took advantage of Ohio State’s struggles by finding gaps in transition and on the fast break for easy baskets. The squad created points off five Buckeye turnovers and knocked down five layups in the opening 10 minutes. Burton led the way with seven points and six rebounds, while Pulliam nailed two of her signature jump shots.

“They were getting into foul trouble pretty early on,” Burton said. “Getting easy buckets by attacking them, getting to the free-throw line or getting in transition was something we were trying to get more of.”

Heading into the second quarter with the Cats up 15-8, the Buckeyes looked to rejuvenate on offense after going scoreless for more nearly four minutes and missing eight of their last nine shots. 72 seconds in, guard Jacy Sheldon provided a spark of optimism by nailing a foul shot to cut the Cats’ lead to eight. But it was short-lived.

NU raced out on an 11-2 run and extended its lead to as many as 17 points behind players like Morris, who scored four points during the sequence.

“I’ve definitely placed an emphasis on just playing my role and not trying to be anything that I’m not,” Morris said. “As I’ve stepped onto the court and had to play this more significant role, my confidence has been more key.”

The Buckeyes flipped the script at the end of the half by holding NU scoreless for two-and-a-half minutes and punctuating a 14-4 run with a buzzer-beater layup to cut the Cats’ lead to seven after 20 minutes.

To slow a potent NU offense shooting over 40 percent from the field, Ohio State ran a full-court press on the purple-and-white at the start of the third quarter. The strategy paid dividends as the Buckeyes cut the Cats’ lead to two on multiple occasions.

But NU circumvented the pressure by finding its shooters. Senior guard Jordan Hamilton — who scored 13 total points — added five points down the stretch, including the Cats’ only 3-point make of the night. Pulliam contributed two jump shots and Burton continued her success from the field and the charity stripe to halt Ohio State’s momentum.

And it worked. The Buckeyes experienced a scoring drought of more than three minutes and missed seven of eight shots in the middle of the quarter.

But Ohio State rebounded thanks to eight points from forward Rebeka Mikulášiková that cut NU’s lead to 51-46 at the end of the third.

The Buckeyes were able to cut the Cats’ lead to 51-50 at the beginning of the fourth quarter, but NU responded with a clutch shot from Pulliam. A few minutes later, an and-one sequence from Morris and a clutch layup from Hamilton effectively sealed a season-defining victory for the purple-and-white.

In the coming weeks, the Cats will face the Buckeyes once again, as well as the No. 10 Terrapins and the No. 13 Wolverines.

With NU currently ranked fifth in the conference, Burton says Monday’s win showed what the Wildcats are capable of and what they have the potential to do as the back end of the regular season approaches.