Despite virtual challenges, Northwestern Mock Trial is back and better than ever 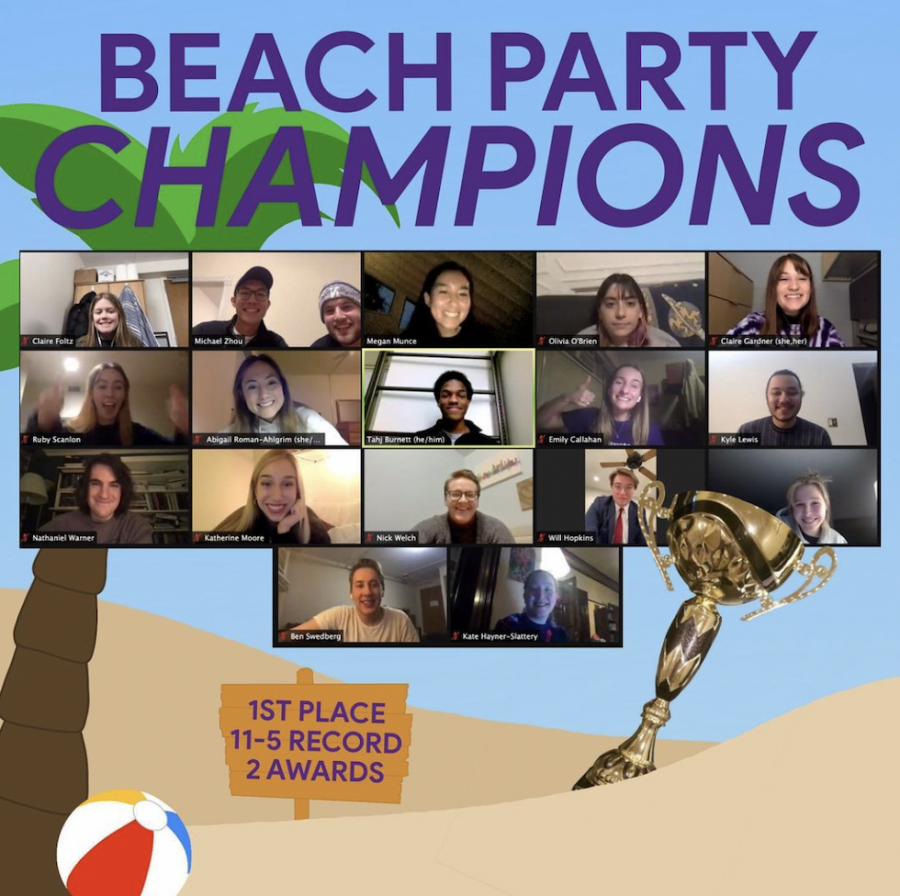 In an Instagram post, Northwestern Mock Trial congratulates the A and B team for their victory in the Beach Party tournament.

While Northwestern Mock Trial is still looking for the culprit behind the murder mystery case, the team has the best people on the case.

Since moving to a virtual season, NUMT has been keeping up their typical practice schedule of four to five meetings a week, each two to three hours long. Their hard work has translated into wins — last quarter, two of NU’s four mock trial teams successfully placed second and fourth in an NU-hosted tournament.

The momentum hasn’t slowed going into the winter season. Two of the teams finished in first and second place overall in two of the most competitive tournaments in the country, according to Medill senior and NUMT President Michael Zhou.

Even though the team is spending up to 15 hours on Zoom weekly, SESP junior Ruby Scanlon said the team’s camaraderie and the energy of the newest members have helped the team succeed.

“We (usually) get to know each other by doing an eight hour drive to Michigan, or meeting up for practice,” Scanlon said. “But when you meet up over Zoom and only see each other over Zoom, it’s really hard to create those bonds that make mock trial so fun.”

Scanlon also said NUMT’s incoming class this year was like “nothing we’d ever seen before,” which she said helped the group acclimate to their new format when traditional bonding experiences were lost.

Weinberg freshman Jovany ‘Geo’ Jeanlouis, one of the new members, said there are challenges to meeting and working with a new team online. Jeanlouis also said the long hours at practice have helped him overcome these difficulties.

Jeanlouis said being comfortable in your own room, as opposed to a formal setting, has made performing easier.

“You’re not in a courthouse being stared at by a bunch of random people,” he said. “That comfortability goes a long way. It makes you more clear-headed and level-minded so you just perform better.”

Scanlon said the fact that there are multiple freshmen on the A team attests to the remarkable incoming class of recruits. This excellence is a part of what makes the NUMT program so unique, she said.

Scanlon said most programs’ A teams are the ones that do really well but she emphasized that NU’s program is unique because the B, C, and D teams perform well in tournaments too.

Zhou said he’s confident all four NUMT teams will qualify out of regionals this year and hopeful this could be the year to win the national championship.

“We’ve proven that we’re one of the best teams in the country this year,” he said.