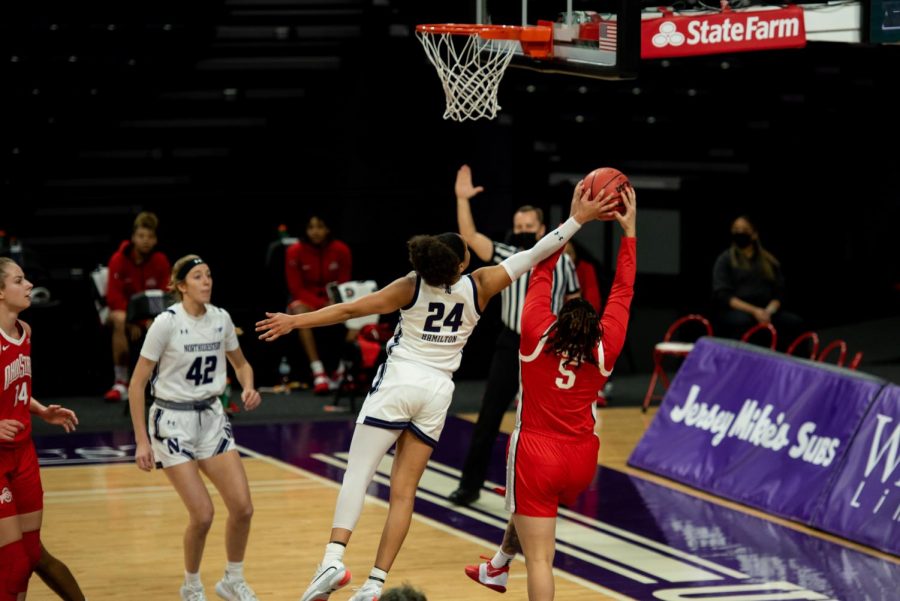 Northwestern entered Monday’s matchup with a gameplan that mimicked their big win against Iowa: rebound on both sides of the court, force turnovers and make use of the transition game.

The Wildcats controlled the first half against Ohio State (10-2, 5-2 Big Ten) Monday night. The No. 22 Cats (10-3, 8-3 Big Ten) were dominant defensively throughout, forcing 11 turnovers from the Buckeyes in the first half.

NU struggled to shoot the ball at first, with a 0-for-5 record from behind the arc in the first quarter.

Slowly, the team’s accuracy improved with shots from junior guard Veronica Burton and senior guard Lindsey Pulliam. Burton ended the night with 20 points. Pulliam had 15. By the time the second quarter rolled around, the Cats were leading 32-35.

The Wildcats relied heavily on their powerhouse defense to secure a win against the No. 11 Buckeyes. NU totaled 22 rebounds and six steals at the end of the first half. It was a full scale defensive clinic; one that silenced Ohio State to the tune of a 9-for-30 showing on field goal attempts.

The freshmen took center stage against the Buckeyes. Forwards Paige Mott and Anna Morris played big inside the paint. Both standing at over six feet, they stood strong against Ohio State junior forward Dorka Juhasz, holding her to eleven points.

“With Courtney being injured, Paige and I both had to step into our role,” Morris said. “The team has done a really good job embracing us, making sure we’re confident on defense.”

Once the second half got underway, the Cats stuck to their strategy of stifling defensive play, just as Ohio State started to shift into gear offensively.

The Buckeyes made a statement in the third quarter with their shooting. Sophomore forward Rebeka Mikulášiková dominated from three point range and sophomore guard Jacy Sheldon capitalized on fast paced transition plays for easy layups.

The game turned into an eerie déja-vu moment of the Indiana game when Ohio State closed the lead to 46-51 at the end of the third quarter. Once again, the Cats looked like they’d tired themselves out after three quarters spent chasing down steals and piling on the pressure.

There were miscues inside the paint, easy fouls made that NU rarely makes on their side of the court. Just like Indiana, the Buckeyes exploited their flaws.

The majority of the fourth quarter followed this trend — Ohio St. controlling the game offensively. Burton, Pulliam, and Wood played over thirty minutes tonight and they were showing signs of fatigue in the fourth quarter stretch.

But in the three minutes remaining, the Cats turned their slump around and found the energy to reassert their high pressure defense. The team pulled themselves out from the deep end with crucial stops inside the paint.

“We know they’re a good team,” Burton said. “We just had to remain poised on both sides of the floor allowing them to go on their run and make adjustments from there.”

From there, NU’s defense was back at its normal dominance. The Wildcats finished Monday’s game with a total of 46 rebounds — the team averages 35.0 rebounds per game typically.

“I thought it was our best defensive effort of the year, against a team that’s capable of scoring 90 points,” coach Joe McKeown said.