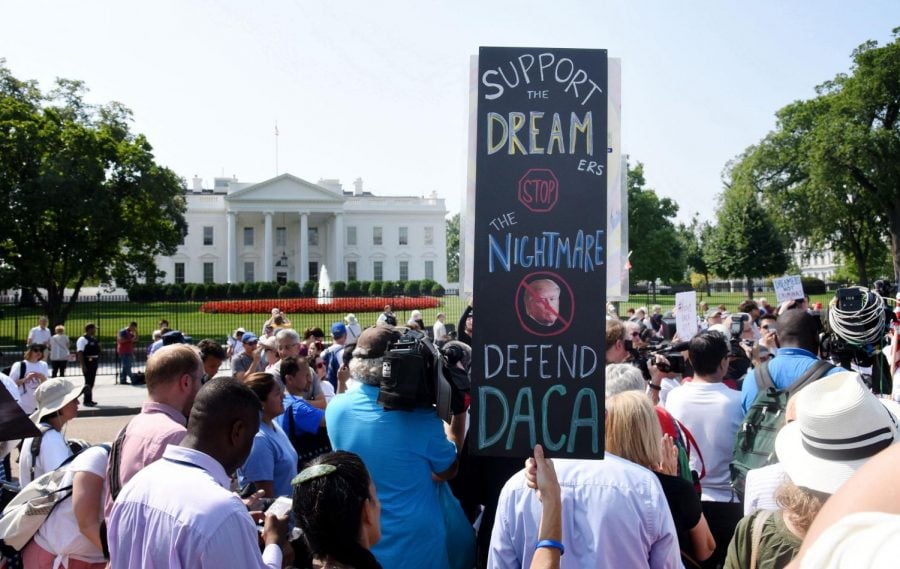 Protesters hold up signs during a rally supporting Deferred Action for Childhood Arrivals, or DACA, outside the White House on Sept. 5, 2017. Biden has committed to “preserving fortifying” DACA during his term.

For Northwestern freshman and first-generation citizen Marcos Sanchez, the Biden administration’s halt to the construction of the United States-Mexico border wall is representative of a positive shift from the Trump administration’s harsh anti-migrant rhetoric.

President Biden halted construction of the $11 billion border wall Jan. 20, one of more than 30 executive orders he has signed since his inauguration aimed at reversing Trump-era policies and reforming other immigration policies.

“It’s just seeing people and your administration finally facing immigration as more of a humanitarian issue than like a disease,” Sanchez said. “It’s just really comforting.”

SESP freshman Freskida Sejdiu, also a first-generation citizen, echoed Sanchez’s sentiment and said she is “optimistic” about his policies. As members of her family are also seeking citizenship, Sejdiu said it is comforting to know that they have a president who won’t deport them.

“Democrats have been talking about (it) for years, and he’s finally the one to get to it,” she said.

On his first day in office, Biden signed several other executive orders, including lifted a travel ban restricting people from predominantly Muslim countries from entering the United States. He also overruled Trump’s previous order to prioritize deportations of illegal immigrants in America, and has proposed a bill to make the path to citizenship easier for immigrants and members of the DACA community.

Biden also initiated a 100-day moratorium on deportations and halted the Migrant Protection Protocols, also known as the “Remain in Mexico order,” that has kept thousands from seeking asylum in the U.S.

Students like Sejdiu and Mccormick freshman Kobe Chamba said they are still trying to remain “realistic” as they wait for more change during Biden’s presidency.

Political science Prof. Jacqueline Stevens said it will be important to look out for legislation — not just executive orders — Biden may implement to reform immigration policies in the United States.

These changes, however, will not come easily, she said, citing the Trump administration’s efforts to barricade immigration reform efforts..

“There’s a whole rulemaking comment process that has to be followed before you can unsnarl that stuff,” Stevens said. “It’s gonna take a lot of bandwidth to just take care of rolling back the policies that Trump put in place, leaving aside actually trying to restart conversations about comprehensive immigration reform.”

— As polarizing as it is, students from both sides agree immigration law needs reform