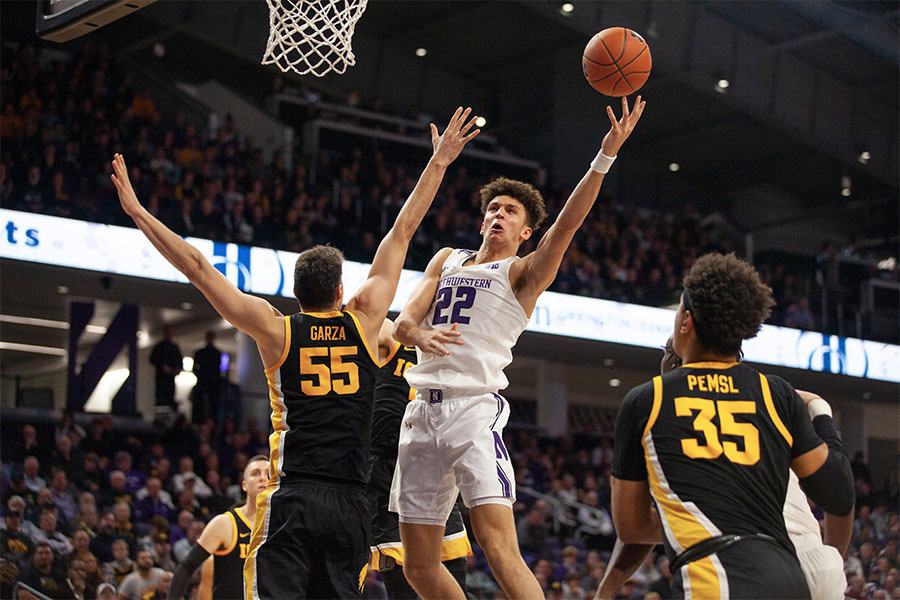 Pete Nance lays up a shot. Northwestern will try to avoid an eighth-straight loss on Sunday against Rutgers.

Northwestern will attempt to end a losing streak that has defined its season when it faces off against Rutgers (9-6, 5-6 Big Ten) on Sunday.

NU (6-8, 3-7 Big Ten) started its season on a tear, winning three straight in conference play. But in its first game against Iowa, the Wildcats faltered, losing 87-72. NU’s seven-game losing streak has largely been attributed to poor defensive play.

In a closely contested loss to Penn State last week, the Cats still ended with 78 points and shot 50 percent from the field. NU’s stars showed out. Junior forward Miller Kopp scored 19 to lead the team, sophomore guard Boo Buie was a close second at 18, and junior forward Pete Nance came in third with 17. So it makes sense that coach Chris Collins placed the load on defensive shortfallings–as Penn State converted 14 NU turnovers into 20 points.

“When you lose some games, you can fragment, you can splinter,” Collins said. “We are not going to do that. We are going to keep this thing together. … And hopefully we can do enough and be even better next Sunday when we get back home against Rutgers.”

This time around, Rutgers is coming off of its first-ever win against Michigan State. It came in blow-out fashion at 67-37, a final that marked the largest margin of victory ever in a Big Ten game.

One player looking for redemption is transfer and sophomore guard Chase Audige, who misfired on a tying three-point attempt with two seconds remaining in the loss to Penn State. Audige, playing in his first season for Northwestern, seems to still be finding his rhythm after sitting out last season due to NCAA transfer rules.

After their game against Rutgers, Northwestern will have nine more matchups on the regular season schedule, including two games against currently ranked teams. So far this season, Northwestern has just two wins against ranked teams, including a flyer against Ohio State that saw the Cats escape with a slim 71-70 win that was sealed with 12 seconds remaining in regulation.

“We are definitely still learning how to win,” Collins said. “I am really proud of how this group is growing. They have great attitudes. They’re coming everyday. They really want to win. They want to do this. ”

— Men’s Basketball: Northwestern struggles to contain No. 10 Wisconsin on defense

—Carroll: We need to talk about the Big Ten referees