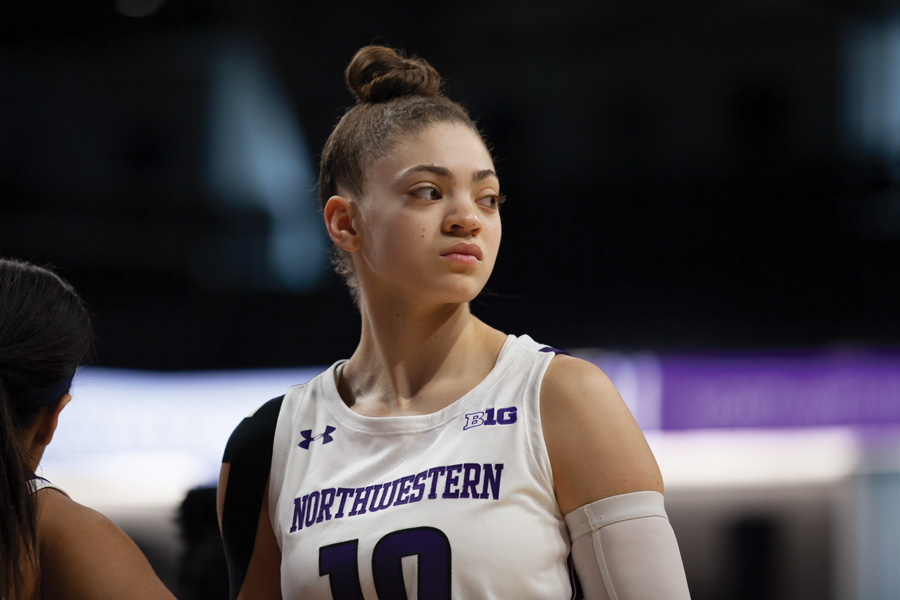 Lindsey Pulliam looks on. The senior guard scored 27 points to lead her team past Iowa Thursday.

After a 61-74 loss to No. 16 Indiana Sunday, Northwestern had something to prove against Iowa. The Wildcats did just that Thursday night, defeating the Hawkeyes 87-80 in a game that was dominated by offense.

The win meant NU (9-3, 7-3 Big Ten) had swept the two game series against Iowa (9-4, 5-4 Big Ten), a feather in the cap for coach Joe McKeown in a season that’s seen the Cats struggle against top teams.

“Another hard fought game,” McKeown said. “You know we really just played with a lot of purpose and a lot of fight.”

With junior forward Courtney Shaw out with lower body injury, the freshman had big shoes to fill defensively against Iowa standout freshman guard Caitlin Clark and junior forward Monika Czinano. But the freshman forward delivered. Morris kept Clark silent in the first quarter and caused the Hawkeyes star to check out after fouling twice early in the game.

“I was really proud of her,” McKeown said. “She’s got this fearless mentality as a freshman.”

Czinano remained the challenge for the Cats — in the first half she shot a perfect 8-for-8 inside the paint. Offensively, she dominated inside the paint in spite of Morris’s stellar defense.

The Wildcats delivered on the offensive end of the floor too. Junior guard Veronica Burton ended the first half with 11 points. After the Hoosiers loss, Burton came out firing against Iowa. For every shot Czinano put up, the junior guard from Massachusetts hit on one right back.

NU’s versatile offense remained strong throughout the entire half with seven different scorers getting on the board including senior guards Lindsey Pulliam and Jordan Hamilton and junior guard Sydney Wood.

However the second half started off rocky for NU — Iowa opened up the third quarter with a seven straight point scoring run before McKeown called a timeout. Clark came alive in the third after sitting out for most of the first half. She brought down 14 points and went 3-for-4 behind the arc.

After nabbing a season low eight points against the Wildcats on Jan. 9, Clark’s 23 points proved her poor shooting early this month was a fluke.

With just over three minutes left in the third, Burton grabbed a steal off Iowa’s offense and ran to the offensive end of the floor for a fast transition layup. Pulliam began to heat up, she earned herself ten points.

Another freshman stand-out Thursday was guard Jasmine McWilliams, whose jump shot late in the third put NU back in the lead 57-56. Her four points late in the game came up big for NU, helping to counter all the field goals hit on by Czinano.

The Hawkeye standout put Iowa back in the lead early in the fourth quarter. She could not be stopped inside the paint, making Big Ten history for the most field goals made in a game. Czninano set a new career high of 34 points and went 17-for-19 on the floor.

“We gotta figure out ways to keep throwing a lot of people at the best players in our league,” McKeown said. “But one thing we did when she did score is we came back to score. That was really important for us.”

Down three points with six minutes left to play, NU was still in the game. Hamilton, Pulliam and Wood were still taking shots and giving Iowa trouble on offense. They just needed to connect on their shots.

And Wood did. With five minutes left, she got a steal and scored on a fast pace transition layup to put the score within one. Burton followed Wood’s performance with the same play twice tying the game 69-69.

From there, NU went on an offensive run, getting back some of the shots they missed in the first half. Pulliam hit one of her signature shots behind the arc with a minute and a half left in regulation and the Cats pulled away.

Pulliam’s stellar performance in the second half was important for the Cats. She ended the night with 27 points putting NU’s opponent on notice that once the senior leader gets going she will not stop.

“Lindsey showed why she’s one of the best players in college basketball,” McKeown said.“She just made play after play for us when we needed it.”

—  Women’s Basketball: No. 21 Cats’ defensive miscues played a big role in loss against No. 16 Indiana