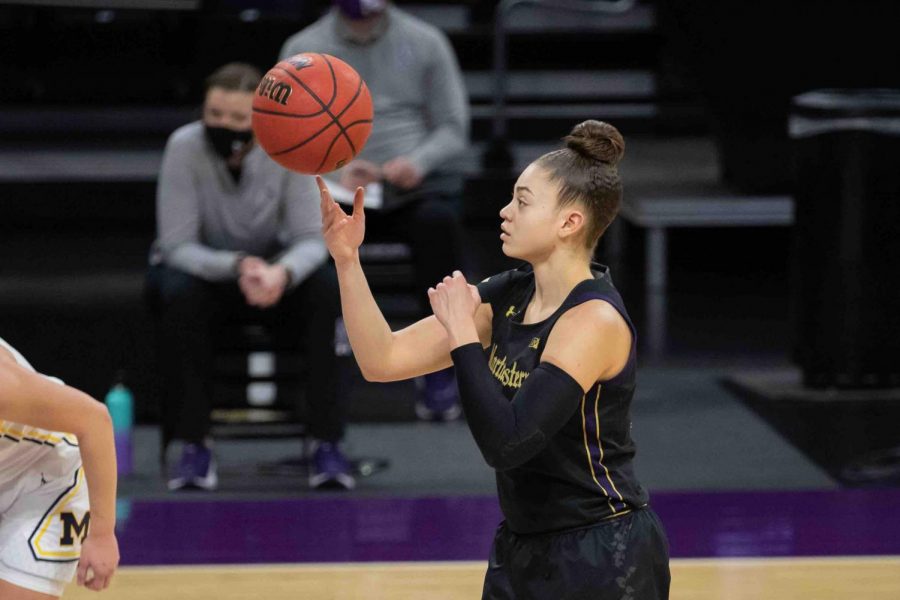 Lindsey Pulliam gathers the ball. The senior guard led the Wildcats with 27 points in Thursday night’s win at Iowa.

For much of Thursday night’s game, it looked as though Northwestern was following a familiar script.

The No. 23 Wildcats led for most of the first half in a critical game at Iowa, using their tried-and-true formula — limit easy looks on the defensive end, force turnovers and get out in transition. But the Hawkeyes exploded to start the third quarter, going on a 16-2 run to turn a six-point deficit into an eight-point lead.

NU could have let the game get away from there. The Cats had folded in a similar scenario just four days ago, when they couldn’t overcome a late push by Indiana. But this time, NU weathered the storm and escaped Iowa City with a much-needed 87-80 win.

Led as usual by their plethora of talented guards, the Cats (9-3, 7-3 Big Ten) shot 60 percent in the second half, overcoming the post play of Iowa forward Monika Czinano. It’s the first time they have swept Iowa (9-4, 5-4 Big Ten) in the regular season in 38 years.

“I screamed, ‘do not let your offense be your defense,’” coach Joe McKeown said. “That was really the only message. We’d come down and try to get it all back in one play. (There was) a lot of time left, a quarter and a half. That was our message, and I think we responded.”

Cold shooting has been the Achilles heel in NU’s three losses this year — they shot no better than 35 percent against Nebraska, Michigan and Indiana. At the media timeout just over halfway through the third quarter on Thursday, they were at 39 percent, compared to 60 percent for Iowa. But then, NU heeded McKeown’s advice and flipped the script.

After the Cats’ deficit had grown to nine, senior guard Lindsey Pulliam hit a three from the corner. On the Hawkeyes’ next possession, junior guard Veronica Burton got a steal and took it straight to the basket for a layup. Pulliam hit from deep again, this time from the top of the key, on NU’s next trip down the floor. The Cats strung a few more baskets together and had taken a one-point lead by the end of the quarter.

Pulliam led NU with 27 points, including a perfect 3-for-3 shooting performance from beyond the arc. Burton added 20 and junior guard Sydney Wood chipped in with 14.

“We just played with a lot of poise,” McKeown said. “To win on the road in our league, you’ve got to have some toughness.”

The Cats kept up that toughness in a back-and-forth final quarter. Czinano scored the first six points of the period to put Iowa back up by five, but NU had an answer to every Hawkeye run. A three-pointer by Iowa superstar freshman Caitlin Clark gave the Hawkeyes a one-point lead with three minutes left, but it would be their last of the game. A clutch triple by Pulliam with a minute and a half left to play all but put the game out of reach.

A loss would have essentially eliminated NU from Big Ten title contention, but as it is, the Cats are right in the thick of it, currently sitting in fifth place with a huge home game against No. 14 Ohio State coming up on Monday.

“The best part about that stretch was we just never panicked,” McKeown said. “In the fourth quarter, we played with a lot of purpose and a lot of fight. Lindsey Pulliam showed why she’s one of the best players in college basketball and just made play after play for us when we needed it.”

— Women’s Basketball: No. 21 Cats’ defensive miscues played a big role in loss against No. 16 Indiana