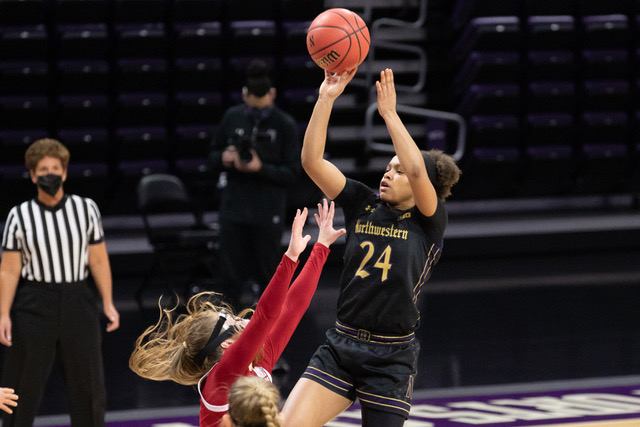 As one of the preseason favorites to win the Big Ten, Northwestern started off the season as many expected — strong.

Then, the Cats stumbled at Nebraska, losing 65-63 on a buzzer-beater. They had a chance to rebound against then-No. 16 Michigan in a nationally-televised matchup at Welsh-Ryan Arena, but fell to the Wolverines by 21 points.

Now the team is at a crossroads.

With upcoming matchups against Iowa, No. 14 Ohio State and Michigan State, No. 23 NU (8-3, 6-3 Big Ten) can stay in the conversation as one of the Big Ten’s top squads if they return to their winning ways. If they lose to any of these squads, it will be costly for the Cats, who are trying to repeat as regular-season conference champions.

“That’s our message. Be consistent,” coach Joe McKeown said. “I think they buy into that. I think our coaches (are) really just trying to focus on the next game, learn what we can from the last game. And keep it compartmentalized into each week.”

On Thursday, the Cats begin the crucial stretch of conference play against the Hawkeyes (9-3, 5-3 Big Ten) in Iowa City.

When these squads last faced off, NU defeated Iowa 77-67 in Evanston. The Cats held an offense averaging 92.1 points per game under 70 and locked down star freshman Caitlin Clark. She scored a season-low eight points and fouled out of the contest.

More than two weeks later, the teams are in different positions. NU is coming off its toughest loss of the season, while the Hawkeyes prepare to play for the first time in 10 days after back-to-back postponements.

Despite their past success against Iowa, Wood knows the defense has to rise to the occasion Thursday.

“We had a few breakdowns (against Indiana) that we’ll definitely work on coming up, especially going into the Iowa game,” Wood said. “I think there’s gonna be a lot of film for us to watch and things for us to improve on.”

The Cats have the third-best total defense in the conference by giving up only 60.1 points per game and creating the Big Ten’s best turnover margin at 11.00.

Meanwhile, the Hawkeyes’ offense has rebounded since their performance at Welsh-Ryan Arena. The squad averages 88.8 points per game, good for the second-best in the conference.

Additionally, Clark has regained her scoring streak. She scored 27 points against Ohio State before adding 26 versus Purdue.

“You just got to make sure you do the best you can (guarding Clark),” McKeown said. “She’s gonna make some shots that other people can’t make and you got to live with that. She’s had a big impact in our league and it didn’t take long.”

Clark said she expects to be heavily guarded by the purple-and-white once again. However, she says her squad has a solution. It’s center Monika Czinano, who racked up 28 points and grabbed 12 rebounds in the teams’ previous matchup.

“Monica was 13-for-14 in that game, so that’s our game plan going back in,” Clark said. “They can’t guard her, so just throw it right back into her every single time.”

To guard Czinano, NU will likely rely on freshman forwards Paige Mott and Anna Morris. The two demonstrated an ability to grab boards and find the basket against Indiana, but they struggled to cover Hoosiers forward Mackenzie Holmes — who scored 22 points — in the place of junior forward Courtney Shaw, the Cats’ leading rebounder who missed Sunday’s game with a lower body injury.

If Shaw misses Thursday’s game, Hamilton has faith in her underclassman teammates to rise to the occasion.

“Paige and Anna came in and they did what they needed to do,” Hamilton said. “It didn’t always work out in the end, but having that first experience to get a taste of Big Ten basketball, I’m really glad that they got through that now, so that they can just capitalize on it and build from it later on.”

With 10 games remaining in the regular season, every contest counts for the Cats. The chances of winning another Big Ten regular-season title look to be slim. But NU still has a lot to play for and a lot to prove.

It all starts tomorrow night at Carver-Hawkeye Arena.