Riker: Wildcat football’s biggest win of the season comes at the end with Fitzgerald extension 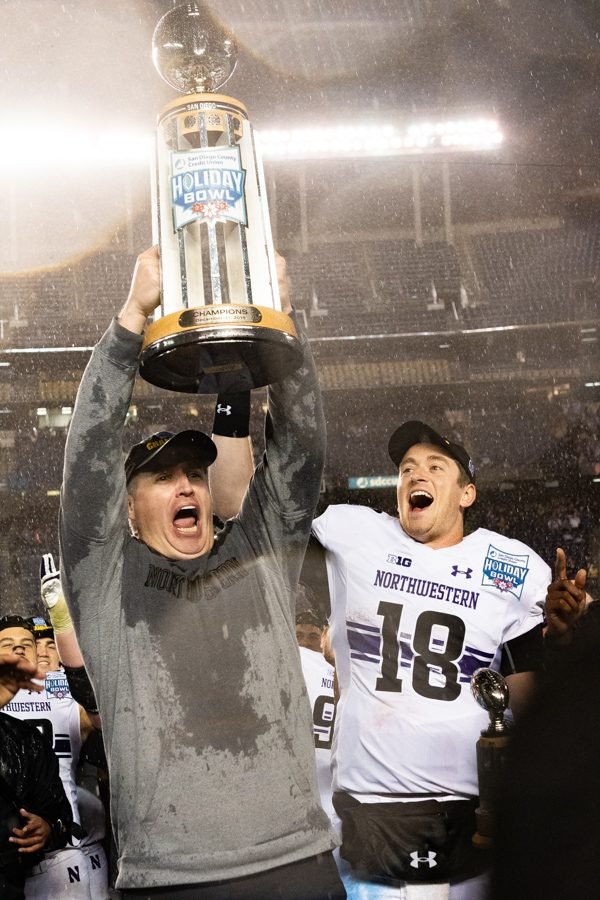 Pat Fitzgerald lifts up the Holiday Bowl Trophy after Northwestern took down Utah 31-20 on New Year's Day in 2019. He’ll hope for more celebrations like that in the next ten years, having just signed a decade-long contract extension to stay at NU.

The most successful era of Northwestern sports came to a close on a sunny January afternoon in Orlando.

The Wildcats’ 35-19 win over Auburn on Jan. 1 gave NU a Citrus Bowl trophy to top off a wildly successful 7-2 campaign. But the win was imbued with a bittersweet tone. The victory was the last in the storied career of defensive coordinator Mike Hankwitz and the last time on the NU sidelines for athletic director Jim Phillips. The departures of Hankwitz and Phillips closed the chapter on a phenomenal stretch that saw NU athletics reach new heights on the field, expand its facilities and build a national reputation as an athletic as much as an academic powerhouse.

On Wednesday, Cats’ fans escaped what would have been the most crushing blow of all when NU athletics announced a 10-year extension with coach Pat Fitzgerald, ensuring that the face of Northwestern athletics for almost three decades would remain in Evanston for years to come. In a time of uncertainty and upheaval, NU has its guy, news that should send a sigh of relief the size of a Lake Michigan wind gust through Chicago’s North Shore.

The golden age of Northwestern athletics started in the late 2000s with the hirings of two Chicago natives, 30-year-old Pat Fitzgerald as football’s head coach in 2006 and Jim Phillips as athletic director in 2008. With Fitzgerald under the headset and Phillips behind the scenes, winning became a part of the Cats’ culture. The numbers bear it out: 10 bowl appearances with five bowl wins, two Big Ten championship appearances over the past three years and a No. 10 ranking in the 2020 season’s year-end AP Top 25 poll. Everything from the Cats’ unparalleled academic achievements to its successful weathering of the COVID-19 pandemic point to the stability and resilience of Fitzgerald’s program.

Football is not the only beneficiary of NU’s golden era. Since Phillips took over, the landscape of Northwestern athletics has literally changed, from the construction of the state-of-the-art Ryan Fieldhouse and the Lakeside Fields on the Lake Michigan shoreline to the opening of the new Welsh-Ryan Arena. Lacrosse and women’s basketball have built reputations as nationally competitive programs, and NU has not only kept, but doubled down on non-revenue sports such as fencing and golf with renovated facilities.

With Phillips leaving to become the next commissioner of the ACC and Hankwitz retiring, alongside a spate of graduations and transfers from the football ranks, Fitzgerald had every excuse to bow out. On top of that, he attracted significant interest from NFL teams for their head coaching positions.

This is not normal. Having just finished his 16th season as a head coach, Fitzgerald is now the sixth-longest tenured head coach in FBS college football. Yet he has never treated NU as a stepping stone for the pros. In a sport where the best coaches, from Nick Saban to Urban Meyer to Jim Harbaugh, try their hands at the pros, Fitzgerald hasn’t reneged on his promises. After the 2018 season, Fitzgerald turned down interest from the Green Bay Packers, one of the most historic franchises in sports, to return to a program that won a total of 18 games in the 1980s.

In bringing back Fitzgerald, NU retains the face of its athletic program, its beacon to signal that the Cats can be something other than a perennial cellar dweller and Big Ten afterthought. And with the sports world facing a long recovery from the COVID-19 pandemic, a start from scratch would have come at the worst time. Fitzgerald’s extension doesn’t guarantee he’ll stick around for the full ten years, but the short-term dividends — a smooth transition to the next athletic administration — are invaluable.

The trio of Fitzgerald, Phillips and Hankwitz changed the course of Cats athletics, and the bell inevitably tolled on this golden era. But with Fitzgerald at the helm, it’s fair to expect this next era to be even better.

John Riker is a Medill sophomore. He can be contacted at [email protected]. If you would like to respond publicly to this op-ed, send a Letter to the Editor to [email protected]. The views expressed in this piece do not necessarily reflect the views of all staff members of The Daily Northwestern.