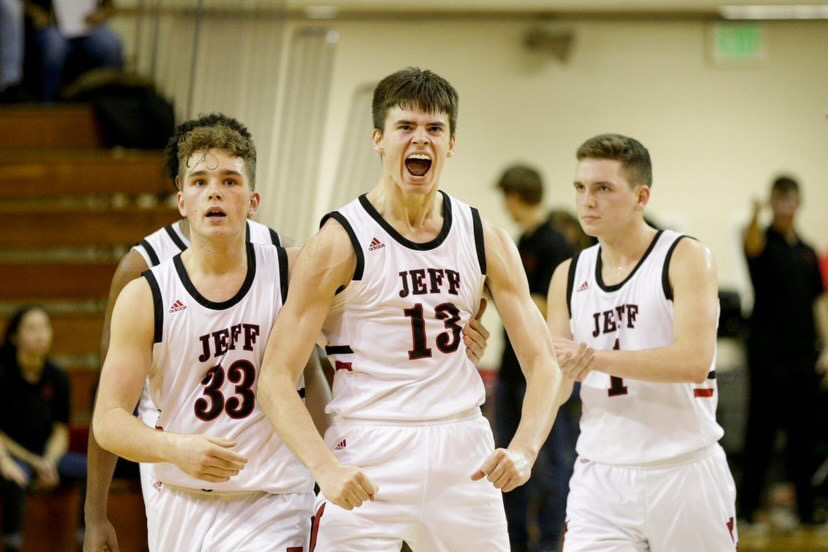 It wasn’t a typical night at Lapel High School on that Dec. 2019 day when Mark Barnhizer led the Lafayette Jefferson Bronchos in their play against the Bulldogs. Two small-town Indiana schools facing off against each other in a state where high school basketball is like religion and game days feel a lot like going to church.

This time, a hero was returning home.

Mark Barnhizer starred at Lapel High School in the early 1970’s, setting scoring marks and developing a long range shot that his son has likened to that of Pete Maravich.

He was back with his two boys. Braxton, now a freshman guard at Trinity Christian College in Chicago, and Brooks, currently a senior at Lafayette Jeff, who in Nov. 2020 signed on to play at Northwestern. They set that game on fire. Brooks led the charts with 17 points, 10 rebounds and seven assists. Braxton chipped in with a 15 point, 13 rebound double double.

And then, the coach took his boys around the school. It’s the same building. The same gym.

“I remember right before we played, they gave him a standing ovation,” Brooks said. “It was cool to see how big of a hero he was there. He always told us about his high school days. To kind of go back and see how much he meant to that community.”

Mark Barnhizer would play at Purdue for one season after graduating from Lapel, before transferring to play three seasons at Auburn. He’d spend a year coaching in Alabama before returning to Indiana to settle down, meeting and then marrying his wife Heidi and continuing a remarkably successful career coaching high school basketball.

It’s no wonder his boys would soon get the better of him.

For a long time, Brooks measured his basketball skill up to his father’s. They’d take each other on at the gym every day. Mark would always win — until Brooks turned 12.

“We were playing open gym one Sunday,” Brooks said. “He would kill me everyday. I would never win a game. But I didn’t lose a game against him that day.”

Mark proudly told his wife about their son’s progress as they were leaving the gym. She’s the one who told Brooks how happy his dad was.

“He didn’t tell me, he was too proud for that,” Brooks said, laughing.

Their relationship has revolved around the basketball court. Brooks first touched the ball when he was four. By the time he was seven, he was playing organized hoops, modeling shots off the pros: off-kilter looped shots like the ones he’d watch Kevin Garnett take on TV, offensive possessions like Steve Nash.

He watched and coached as Brooks went from averaging 16.2 points per game as a sophomore at Lafayette Jeff to 20.8 points and almost five assists per contest as a junior. Mark couldn’t have expected what was to come in his son’s senior year —both his son’s breakout season and a global pandemic, which has gotten in the way of a potential season for the ages.

Interrupted and changed forever by the COVID-19 pandemic, the Barnhizers and the team at Lafayette Jeff didn’t know if they’d be able to play this season.

“You never really know if somebody’s gonna be quarantined,” Barnhizer said. “Or just what the rates and cautions that they’ll take. You just gotta go hard every day because you don’t know what tomorrow brings. It’s really tough but you’ve just gotta adjust and make the most of it.”

The Indiana High School Athletic Association eventually allowed competitive basketball to return. The Lafayette Jeff players space out whenever they can in practice. Coaches and players wear masks when they’re not on the court. It’s all about caution.

The season opener against the Indianapolis Metropolitan Pumas was different. Gone were the fans, who’d crowded the stands in all of Barnhizer’s previous games with the Bulldogs. Braxton was gone too, plying his trade in college.

“It’s a lot different,” Brooks said. “Especially if you’re in Indiana, you’re used to a lot of fans being at your games, playing in front of people. But this year, it’s just been the exact opposite. We only get like two fans every game.”

Behind his 40 point, 11 rebound masterclass and triple-double, the Bronchos thrashed the Pumas in a 105-54 scoreline. Along the way, Barnhizer showcased his hops. He threw down dunks on consecutive possessions in the middle quarters, capitalizing on fastbreaks and engineering his own steals. And he spread the ball around, dishing out a whopping ten assists in the effort.

Teammate Ashton Beaver, a senior at Lafayette Jeff and Brooks’ teammate since sophomore year, put up 23 points on opening night.

“We were ready to go,” Beaver said. “We were trying to show everyone that even though our brothers were gone, we could still be good. Everyone thought we weren’t.”

That opening night wasn’t an outlier. Barnhizer and the Bronchos won their first nine games of the season, a stretch in which the guard scored over 30 points each time, and hit the forty point mark on three separate occasions. He’s now averaging 35 points, 11 assists and seven rebounds a game.

More importantly, Barnhizer is doing it in a year in which so much is up in the air: when he’s not sure if he’ll play tomorrow, or which teammates will be suiting up on the court alongside him.

“We’re all just very excited to play,” Beaver said. “We didn’t know if we were going to be able to play at first. Because of Covid, we had to quarantine before our season even began. We keep our own energy. That’s all we need.”

— Men’s Basketball: Brooks Barnhizer wants to be Northwestern’s point guard of the future

— Men’s Basketball: Four-star forward Casey Simmons is the next big believer in Northwestern