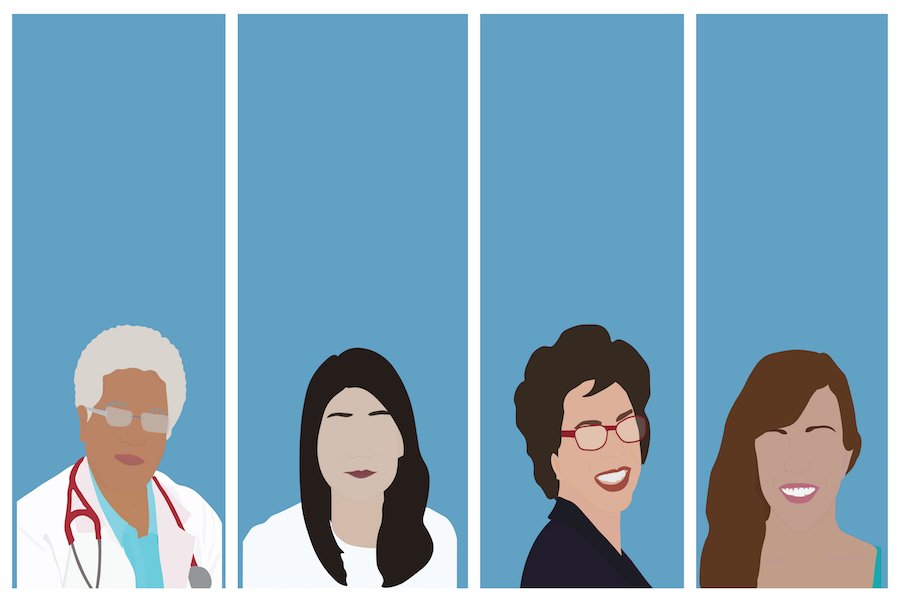 Participation rates have since risen. But Halasyamani said her team anticipated the initial low turnout, given NorthShore’s diversity in race, ethnicity and political views.

“Our vaccination efforts within healthcare ecosystems are kind of a microcosm of our communities,” she said. “We’re seeing those same concerns in our populations.”

Scholars say decades of institutional racism have laid a foundation for legitimate distrust in medicine. As NorthShore and AMITA Health work with the Evanston government to distribute the Pfizer and Moderna vaccines, local experts emphasize the need for messaging tailored to residents of color who may be vaccine hesitant.

One Evanston resident, who asked to remain anonymous for fear of community retaliation, said he will not take the coronavirus vaccine because he sees echoes of the 1932 Tuskegee experiment in the vaccine’s rollout. The 40-year project, conducted by the Public Health Service and the Tuskegee Institute (now Tuskegee University) denied Black men with syphilis proper treatment in order to track the full progression of the disease, even though they were told otherwise.

“I remember Tuskegee,” he said. “The doctors had the penicillin, and they wouldn’t give it to them. That was a government study, and look what happened.”

NU political science Prof. and Associate Director of the University’s Institute for Policy Research James Druckman said when it comes to the likelihood of being vaccinated, “very large gaps” exist between Black Americans and other racial groups.

A member of the COVID States Project, a multi-university consortium aimed at analyzing national data about virus transmission, Druckman began tracking vaccine hesitancy last summer. According to the team’s research, only 52 percent of African Americans are likely to seek vaccination, compared to 67 percent of White people, 71 percent of Hispanic people and 77 percent of Asian Americans.

“That (disparity) reflects the history of unethical and deadly medical trials that have been run,” Druckman said.

Generations of medical bias and maltreatment have harmed communities of color. In 1951, The John Hopkins Hospital began using Black American Henrietta Lacks’ cells without her consent. Last September, a whistleblower alleged that U.S. Immigration and Customs Enforcement conducted forced hysterectomies on immigrant women, a practice preceded by decades of forced sterilizations of Black, brown and Indigenous women in the United States.

Kenzie Cameron, a research professor in general internal medicine at Feinberg School of Medicine, said racism in medicine results in a “rational distrust” of the medical institution.

Cameron said this hesitation is dangerous, especially in a pandemic that has disproportionately impacted Black and brown communities.

“If we see the same levels of lower vaccine uptake in Black and brown communities (for the COVID-19 vaccine) as we’ve seen with other vaccines, we are going to see an increasing and wider disparity,” Cameron said. “I don’t want to see this get even worse.”

“People sometimes are afraid of what they do not know,” Ogbo said. “(It) becomes our responsibility to equip them with the knowledge and information.”

Halasyamani shared the sentiment, calling information the “antidote to fear” and recommending that residents refer to resources from NorthShore, the CDC and the Illinois Department of Public Health.

Halasyamani said several myths about the vaccine need to be dispelled, including the idea that it is not safe or effective because it was quickly developed, as well as the notion that individuals could contract COVID-19 from the vaccine.

“The individuals who reviewed the scientific information at the FDA, they are not politically motivated,” she said.

She said while individuals cannot contract COVID-19 from the vaccine, because neither vaccine contains a live or dead virus, people can expect flu-like symptoms after being vaccinated.

According to the CDC, up to 89 percent of vaccinated people develop some pain or swelling at the injection site, and up to 83 percent experience fevers, fatigue, or headaches. These symptoms usually resolve within three days of vaccination, and hypersensitivity-related adverse events are rare.

As local healthcare organizations continue to spread this information to Evanston residents, Druckman said messaging strategy is important to consider. From his research, messages prioritizing personal physicians’ own voices are the most effective in building trust.

Clyde Yancy, chief of cardiology and vice dean for Diversity and Inclusion at Feinberg, also emphasized the importance of people hearing from medical professionals who look like them, speak their languages, and understand the distrust they feel.

Northwestern Medicine’s recent “Why I Got Vaccinated” video campaign featured the testimonies of Black and brown medical professionals, Yancy included.

“I am a Black man volunteering in a very willing way to receive the vaccination, in part because this disease has disproportionately impacted people of color, and in part because, as a scientist, I trust the science,” the former American Heart Association president said in a video that showed him getting vaccinated.

Moving forward, Yancy said communication that is framed in a culturally competent way has the potential to make vaccination messages trustworthy and effective.

“I think that changes everything,” he said.

— Evanston, NU gear up for next phases of vaccine distribution