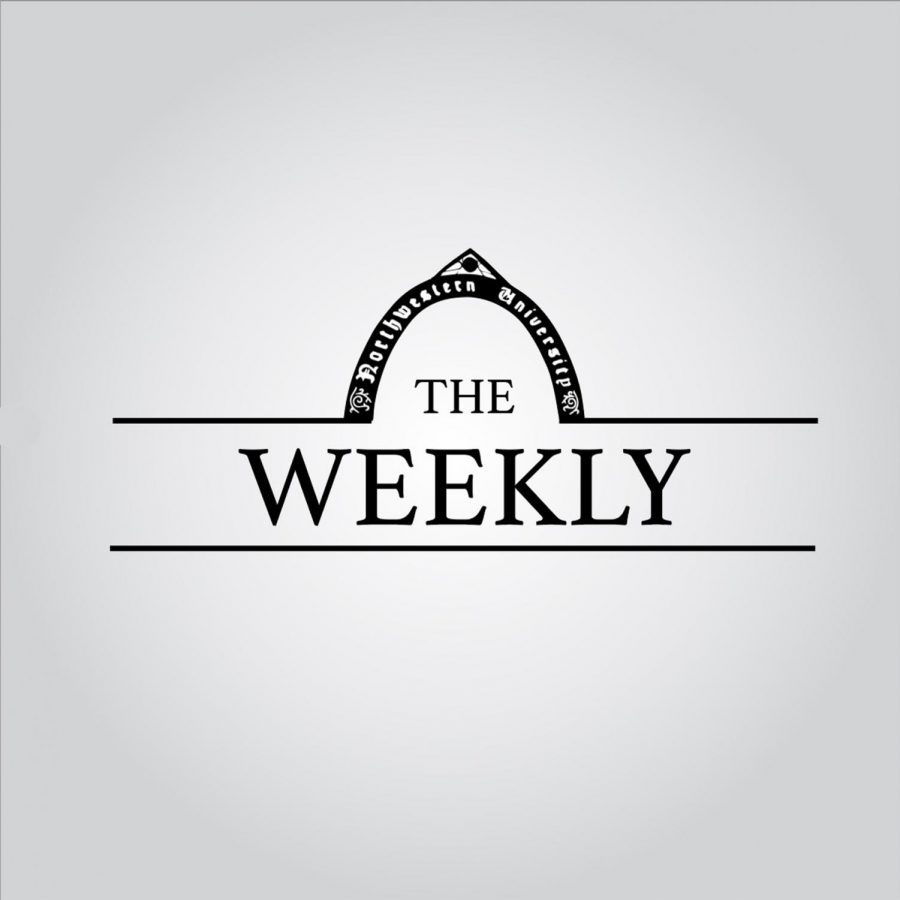 Some Northwestern Memorial Hospital workers received their second dose of the Pfizer-BioNTech COVID-19 vaccine and leaders of D65 faced an uptick of hate crimes prior to the Inauguration. The Weekly: Week Two Recap breaks down our top headlines with the reporters and editors who covered them.

JORDAN MANGI: And I’m Jordan Mangi. This is The Weekly: a podcast that breaks down our top headlines each week.

ALEX CHUN: Here’s what’s been happening in the headlines. On campus, some Northwestern fraternities and sororities plan to continue with recruitment this winter despite the Abolish Greek Life movement.

JORDAN MANGI: And in an effort to address internal racism, Associated Student Government created the Ad Hoc committee. President Juan Zuniga said the committee’s goal is to look at the fundamental structure of ASG.

ALEX CHUN: In city news, Evanston/Skokie School District 65 will open schools on Feb. 16 with a hybrid of online and in-person classes.

JORDAN MANGI: Those are some of our top headlines. Now, we’re talking with Daily staffers to bring you up to speed and dive deeper into some of our biggest news. First up: some Northwestern Memorial Hospital healthcare professionals have received their second dose of the Pfizer-BioNTech COVID-19 vaccine. What might this mean for life amid the coronavirus in Evanston?

ALEX CHUN: And Evanston leaders, including more than one D65 board member, have faced an uptick of hate crimes as the Inauguration neared. But some of these hate crimes go back as far as August 2020. How is the D65 school board responding? Stay with us to hear directly from the reporters and editors who covered some of The Daily’s top stories.

JORDAN MANGI: On Jan. 8, some Northwestern Memorial Hospital healthcare professionals received their second dose of the Pfizer COVID-19 vaccine. The vaccine, created at record speed, has sparked new hope for these healthcare workers.

ALEX CHUN: Here to tell us more about this is Managing Editor James Pollard. James, can you tell me a bit about how the vaccine was distributed to these healthcare professionals?

JAMES POLLARD: Yeah. So on Dec. 18, I believe is when many Northwestern Memorial Hospital healthcare workers began receiving the first dose of the vaccine. And then because about three weeks are supposed to separate the first dose and the second dose, it wasn’t until Jan. 8 that many of them at Northwestern Memorial Hospital began receiving the final dose of the vaccine, which is once you’ve received both doses, that is when you’re supposed to achieve 95 percent efficacy because they were receiving the Pfizer-BioNTech vaccine.

ALEX CHUN: Can you speak a little bit on what being vaccinated means to these healthcare workers?

JAMES POLLARD: Yeah, the healthcare workers I spoke to described it as an emotional experience. One of them said on the day that a lot of them were being vaccinated, there were smiles and tears all around the building. And for a large part, it’s brought a lot of relief. personal relief. I mean, these are people who have been exposing themselves quite frequently to this virus when treating it. And so it’s brought them a sense of relief that they can continue to treat patients with the virus and fight this pandemic, without likely compromising their own health.

ALEX CHUN: What did healthcare workers have to say about their experiences being vaccinated?

JAMES POLLARD: So one nurse told me when she received the vaccine on Dec. 18, of the 40 different vaccination stations that were set up, the person who ended up administering the vaccine to her was a fellow co-worker, they had been working together since the pandemic began. And it was just a very emotional thing to have this person specifically administer the vaccine to her and she said someone took a photo and she sent it to her family. She has children on both of the coasts. And she just was texting her family, like, this vaccine brings us one step closer to the end of this pandemic. And she said, you know, there were tears, she was crying. And then, other doctors spoke to how they physically felt when they received the vaccine. So, one respiratory therapist said, when he received the first dose, he didn’t feel anything. When he received the second dose, about 12 hours later, he had some body aches, some chills, but by the next morning, he felt totally fine. And he actually said, it isn’t abnormal to feel that way. And he took it as a sign that his immune system is responding to the vaccine and is able to protect him in the future.

ALEX CHUN: You mentioned that many of these healthcare workers expressed how emotional getting vaccinated has been for them. Why is that?

JAMES POLLARD: Yeah, so one doctor described throughout the past nine months kind of this fear that, you know, what if my personal protective equipment doesn’t fully, you know, shield me right now? What if I’m in contact with this patient and I don’t have all of it on, and this patient hasn’t been confirmed COVID positive yet? And then later, we find out they’re COVID positive and now I have to isolate. And just the ways that what was happening in the ICU would then manifest itself at home. That means they have to either stay away from their home or isolate in their home and can’t see their families. And it was just this intense anxiety paired with conversations with their spouse about living wills, and just kind of the sense of mortality that this pandemic has forced a lot of people to contend with, but especially someone with a line of work like his. Just a very intense sense of fear and anxiety. The vaccine has brought that down a bit, there isn’t that intense fear, they can go about their day at work without that on their minds.

ALEX CHUN: So how has receiving the vaccine changed health workers feelings of safety in the pandemic? Do they anticipate us returning to a semblance of normal life in the near future?

JAMES POLLARD: So like I’ve been saying, it’s brought a sense of relief for the personal safety it’s brought them, but as one of them said, they want everyone to be able to feel that sense of safety. All of them emphasized to me that just because they’ve received the vaccine personally does not mean that they will be going out and returning to their behaviors from over a year ago. One of them emphasized that this vaccine is 95 percent efficacious, which means there’s still that 5 percent chance that potentially they could still catch it. Another one emphasized that with the Pfizer vaccine, the data hasn’t yet shown whether or not it prevents you from spreading it to others. So while it is likely to keep them from getting super sick, we don’t yet know if the vaccine prevents someone from still spreading the virus to other people. And so for those reasons alone, you know, it’s incredibly important that they continue personally to wear masks. And as one of them told me until the entire country reaches herd immunity when enough people have been vaccinated. It’s important that everyone continues to follow CDC guidelines. As one doctor put it to me, he’s been telling people all year, everyone is on the frontlines along with him. The best way for someone — anyone — to help him do his job is to continue to wear a mask, follow social distancing guidelines, etc.

ALEX CHUN: James, thanks so much for speaking with us today.

ALEX CHUN: Evanston/Skokie School District 65 board members have recently faced a spike in hate crimes. On the weekend of Jan. 9, school board vice president Elisabeth “Biz” Lindsay-Ryan’s car was ransacked. A card containing a homophobic slur was left behind. This is just one of multiple recent hate crimes directed toward D65 leaders who hold marginalized identities over the past few months.

JORDAN MANGI: Here to tell us more about this is reporter Olivia Alexander and City Editor Maia Spoto. Olivia, could you tell us about the hate crime against D65 school board vice president Elizabeth Lindsay-Ryan?

OLIVIA ALEXANDER: So her car was broken into vandalized, ransacked and behind was left a homophobic slur. And then also in the same weekend, we saw a hate crime against aldermanic candidate Carolyn Murray. And hers was during a Democratic Party of Evanston zoom call. It was Zoom-bombed. And the person in that hate crime definitely unmuted and voiced multiple racialized attacks toward her.

JORDAN MANGI: Maia, how might this recent spike in hate crimes be connected to what’s happening in national news?

MAIA SPOTO: Basically, this all happened within a week of the insurrection at the US Capitol, which seems like an interesting connection. Olivia, when she reported her story, the administrators told her that they were trying to really lock down security before inauguration day because they’re expecting something to happen, potentially. And it seems like nothing happened. But definitely these escalating threats have been going since August and have gotten very terrifying.

OLIVIA ALEXANDER: Throughout the last few months, even as far back as August 2020, Biz told me that about three cabinet members in D65 as well as five board members have gotten postcards, which all appear to be from the same person. And they reference biblical language using death and repentance words. And those have been very cryptic and scary to the board members as well as administrators.

JORDAN MANGI: Did the school board president acknowledge the rise in hate crimes?

OLIVIA ALEXANDER: Yeah, D65’s response…they’ve responded in a couple of different ways. They have sent out an email, and within it, they condemned the White supremacist attacks, as well as just recommitted themselves to racial and educational equity for all the students within their school district. Biz also mentioned to me in our interview that she thinks these hate related incidents and crimes could very much have an impact on people’s willingness to run for City Office, within the school board and in other offices. Some people might say, “Oh, gosh, it’s just not worth it for me to run for office if it’s going to put myself and my family in danger.” And I think that has very serious implications for everyone who’s thinking about becoming a city officer or on the school board in Evanston.

JORDAN MANGI: Maia and Olivia, thanks so much for chatting with us today.

JORDAN MANGI: And I’m Jordan Mangi. Thanks for listening to another episode of The Weekly. This podcast was reported on by James Pollard, Olivia Alexander, Maia Spoto, Alex Chun and myself. This episode was produced by both Alex Chun and myself. The audio editor of The Daily is Alex Chun. The digital managing editors are Molly Lubbers and Olivia Yarvis. The editor in chief is Sneha Dey.