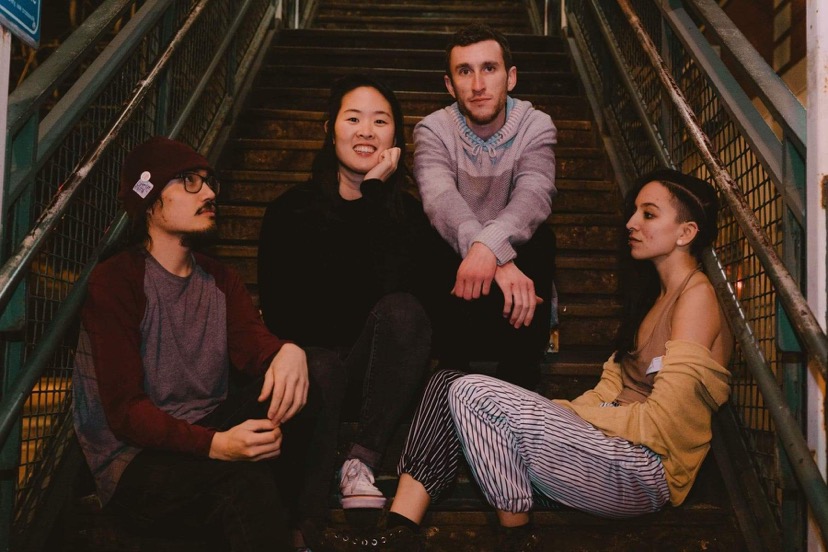 Matthew Bactat, Claire Zhang, Ethan Urborg and Taylor Ericson, the members of splits, pose for a photo in front of an El station. Their newest EP, “vice versa,” released this month.

This album’s cover art depicts four koi fish for the four members of the band.

“Koi fish in Japan (are) associated with perseverance, adversity, strength and purpose, so we thought that connected with the idea for the record,” vocalist Taylor Ericson said. “Because they are swimming in a circle, that also touches on this idea that you can be resilient with the right group.”

Claire Zhang, lead guitarist, said the album’s message is to gather inner strength and not give up on yourself, a point she has found especially relevant amid the global pandemic.

With the band spending lots of time fleshing out parts of songs, Zhang said “vice versa” is musically stronger than the band’s debut EP.

Stiles Ramirez said splits distinguish themselves from other Chicago indie bands with its genuine desire to communicate with their fans. Ramirez reached out to the group on Instagram after seeing one of their shows and, since then, splits regularly checks in on Ramirez.

Ramirez listens to the record while they do homework and draw. When they first listened to the record, their reaction was “pure joy.”

“I can definitely hear the emotion, I can feel them in a certain way,” Ramirez said. “I can dance to it, but it is actually sad if I pay close attention to it.”

Beth Howells said they have seen almost every splits live show. They said they prefer some of the older songs on “they let us go” to “vice versa” because the songs are faster and more familiar.

Ericson, the band’s vocalist, and Zhang, the lead guiarist, said splits wants to release a single before summer and “ideally” another album before the end of the year. The two band members hope to implement a faster songwriting process to avoid large gaps between EPs again.

While their first EP consisted mostly of guitar, drums and vocals, “vice versa” contains more layers and some synthesizer due to increased involvement from producer John Terry.

Moving forward, Zhang said the band wants to continue refining their sound, using a structured approach, without losing the unique guitar-centered sound. The band, Zhang said, has learned to stay resilient during these difficult times.

“It was a challenge of just learning how to write and collaborate separately, all online,” Zhang said. “This EP is really about resilience — that’s what the koi fish symbolism is.”