Women’s Basketball: Northwestern collapses late in loss to No. 16 Indiana 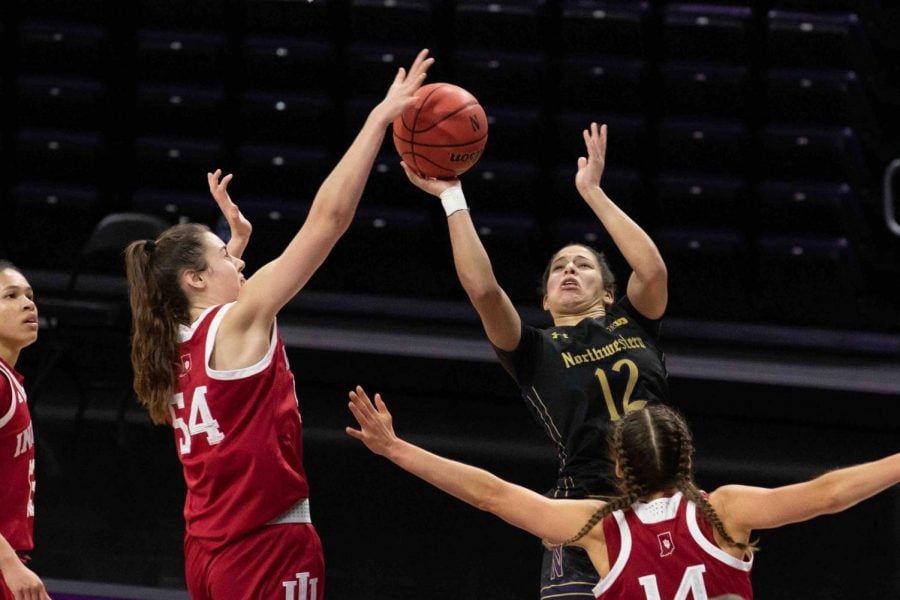 Veronica Burton puts up a contested shot. The junior guard had 17 points in NU’s loss to Indiana.

For 25 minutes Sunday, Northwestern was passing the test. The No. 21 Wildcats were overcoming a deep size disadvantage, exacerbated by the absence of junior forward Courtney Shaw, and led No. 16 Indiana by 13 points.

Then the Hoosiers stepped on the gas, and NU didn’t have an answer.

Several factors contributed to what was once a 13-point NU lead in the third quarter turning into a 13-point loss, but just like in the Cats’ other two losses against Nebraska and Michigan, cold shooting was the primary culprit. NU shot just 3-for-21 in the last 15 minutes, while the Hoosiers, after starting 16-for-42, made 10 of their last 15 shots.

“We had a lot of miscues in that fourth quarter,” junior guard Veronica Burton said. “I also think fouls played a role; we had to be a little careful. They were getting it inside more than we wanted, and we weren’t forcing as many turnovers.”

With Shaw, the Cats’ primary post player, out due to a lower-body injury, NU was forced to rely on freshman forwards Paige Mott and Anna Morris down low. And for a while, the youngsters held their own against Indiana star forward Mackenzie Holmes.

Burton and senior guard Lindsey Pulliam each shot 50 percent in the first half, scoring 10 and 13 points, respectively. Jordan Hamilton, another senior guard, got going early in the third, helping spark a 10-point run that pushed NU’s lead to 49-36. The Cats came into Sunday’s contest last in the Big Ten in free throw percentage, but made their first 17 from the foul line against the Hoosiers.

“It’s a great learning experience for (Mott and Morris),” coach Joe McKeown said. “I thought they both played really hard and did a lot of good things for us. It’s a positive step for them to get that kind of experience.”

But Indiana, which was well rested after its previous two games were postponed due to COVID-19 issues with their opponents, out-hustled NU down the stretch. The Hoosiers’ 12-5 spurt to end the third quarter was just a small preview of what was to come in the fourth.

Indiana outscored the Cats 26-7 in the final period, with Holmes scoring 10 of those points as Mott and Morris began to wear down.

NU’s biggest strength is its ability to force turnovers, but the Cats and Hoosiers were even in that category Sunday, with each team committing 12. With NU already at a disadvantage in the paint, the Cats couldn’t overcome a 2-for-11 shooting performance from behind the arc.

After being blown out at home by Michigan three weeks ago in its first ranked matchup of the season, NU had won the next four, beating three Big Ten bottom feeders in Wisconsin, Penn State and Illinois and picking up its best win of the year against Iowa. But the Cats’ inability to finish on Sunday shows they’re still a touch behind the conference’s best.

“We had a 13-point lead, so a lot of our transition offense was good today,” McKeown said. “Not rebounding the ball in the last 12 minutes stopped us from getting out and running. When we can run, we’re really good.”

— Women’s Basketball: The rise of Courtney Shaw into Northwestern’s next starting center