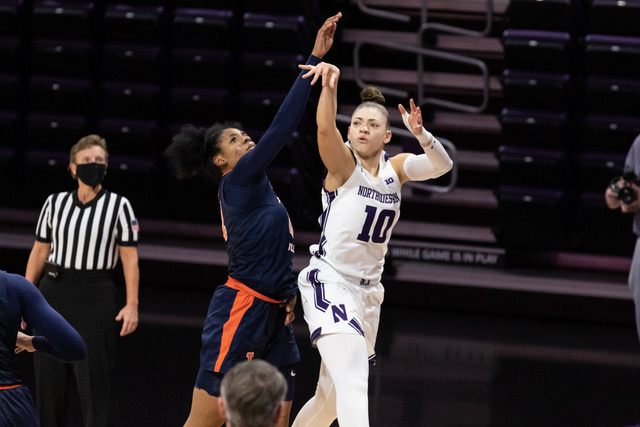 Lindsey Pulliam watches her jumpshot. The senior guard scored 28 points in No. 21 Northwestern’s 73-54 win over Illinois.

Throughout her Northwestern career, Lindsey Pulliam has played some big games.

She scored a career-high 33 points against Indiana in Feb. 2018. She put up 19 or more points — including 31-and-32-point performances — in six straight games last season. Her fadeaway jump shot clinched a come-from-behind win over Nebraska last February.

On Thursday night at Welsh-Ryan Arena, Pulliam did not set any career-highs or break any conference records. Instead, she scored 19 points in the third quarter to end any chance of an Illinois win and lifted No. 21 Northwestern to its fourth-straight conference victory.

In the Wildcats’ 73-54 win over the Fighting Illini, Pulliam dropped 28 points, her highest total this season and most since she scored the same number at Wisconsin nearly eleven months ago.

“I’m just being aggressive,” Pulliam said. “Keep shooting (the) basketball and doing what my team needed me to do. It just so happened that they needed me to step and score and that’s why I did.”

Pulliam’s performance tonight showed why the senior guard was named the Big Ten Preseason Player of the Year. She was lights out from all across the court, nailing driving layups, contested jump shots and 3-point attempts. And she showed up when NU needed her most.

Heading into the second half, Pulliam had more missed shots (5) than points (4) as the Cats led the Fighting Illini 30-15. But within 50 seconds, she got back on track by extending NU’s lead to 17 with a driving layup. Then, she added a triple and two makes from the free-throw line.

But the next two-and-a-half minutes were all about the orange-and-blue.

Illinois ripped off 15 points to cut NU’s lead to nine and forced the Cats to miss five consecutive shot attempts.

In response, coach Joe McKeown gathered with his team during a timeout and told them to get back on track.

“(McKeown) was like ‘alright, let’s go,’” Pulliam said. “We know when we play defense, that generates our offense.”

They made sure to do just that.

On the ensuing Fighting Illini possession, junior guard Lauryn Satterwhite stole the ball from guard Jada Peebles and found Pulliam on the fast break for a pull-up jumpshot.

Pulliam soon nailed another jumper and a second-chance layup to extend NU’s lead to 17 with less than three minutes remaining in the third quarter.

She followed those baskets up with another layup and two more of her signature jumpshots to give the purple-and-white a 21-point lead at the end of the third quarter.

“She gets everybody’s best shot defensively,” McKeown said. “They face guard her, they switch off on her, make it hard for her to get the ball. And then they flood to her too. She handled that. She kept her poise.”

But her stellar night wasn’t done yet. She added five more points, including a deep triple that extended the Cats’ lead to 25, in the final frame to put the icing on her highlight performance.

Pulliam showed tonight that no matter what defense you put her up against — a triangle, a box, a press — she will find the basket. McKeown echoed this sentiment, acknowledging that even though teams prioritize stopping No. 10, she always finds a way to make plays.

With No. 16 Indiana coming to Evanston on Sunday for a top-25 conference matchup, NU has a chance to prove it is still one of the best teams in the Big Ten with a win.

Pulliam knows this. That is why she came back out to the court after the game ended to practice free throws.

She was still putting in work after her best game this season. And that should concern opponents.

“I feel like I haven’t played to my full potential,” Pulliam said. “I can be better than what I did today. Just seeing those (shots) go in the basket and feeling like I’m back to myself is just big going into Sunday.”