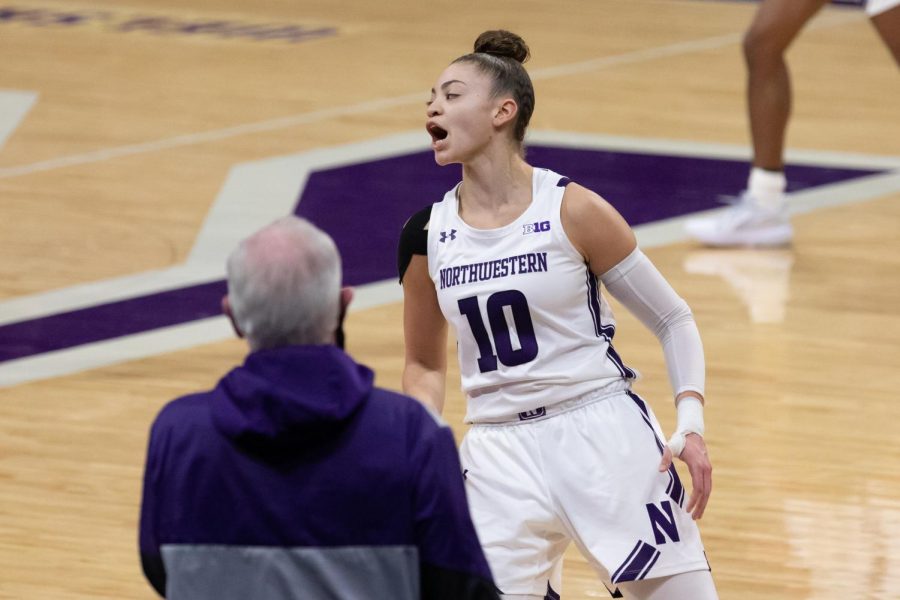 With forty seconds remaining in the third quarter and a defender on her back, senior guard Lindsey Pulliam turned around and made a play she’s become famous for in her Northwestern career, hitting a jumper and finding nothing but net. The senior guard led NU’s offense with 28 points against the Fighting Illini Thursday night.

Northwestern (8-2, 6-2 Big Ten) won big against Illinois (2-7, 0-6 Big Ten) on Thursday, their eleventh straight victory against the orange-and-blue. But the team wasn’t dominant until the end of the second half.

The Wildcats controlled the defensive side of the floor, totaling 19 rebounds at the end of the first half. But they needed to kick into the second gear offensively to put the game out of reach.

In the first quarter, as NU struggled to find its offensive prowess, the game looked set to go down as a defensive battle.

“We struggled a little bit on offense,” coach Joe McKeown said. “We got off to a slow start. We missed some shots. We gotta get our timing on offense.”

Northwestern shot just 6-for-14 in the first quarter, missing shots inside the paint and behind the arc.

Last Sunday against the Lady Lions, NU turned the ball over 22 times. Thursday night, it was shooting that plagued them.

Illinois did not have a stand out shooting performance either. The Fighting Ilini shot 2-for-8 in the first quarter, spending most of the time on their defensive end of the floor.

Although the Cats controlled the ball for much of the first frame, they couldn’t connect on their shots. Most of the star players remained silent, including junior guard Veronica Burton who shot 1-for-4 in the first quarter.

But NU showed glimpses of a return to normal towards the end of the half. Sophomore guard Kaylah Rainey and junior guard Sydney Wood capitalized on fast pace transitions to kick the Cats lead into high gear right at the end of the second quarter.

The second half of the game showed a different Northwestern team. Senior guard Lindsey Pulliam opened the third quarter with a signature smooth layup.

But Illinois went on a run too. The Fighting Illini scored 7 straight before McKeown called a timeout to settle things down. For every scoring opportunity NU had, the Fighting Illini fired back with their own shots.

With five minutes left in the third, Illinois sophomore guard Jeanae Terry’s score all off a turnover cut Northwestern’s lead to 39-30 — it’s lowest since the first quarter.

But that run didn’t last long — Burton and Pulliam reignited the Northwestern offense with an eight point run in just three minutes, resetting the Wildcats lead at over 20 points.

Pulliam stole the show. In the second half alone, Pulliam went 2-for-2 behind the arc and totaled 4 rebounds, something she’s struggled to do in the last two games.

“My mindset was just be aggressive,” Pulliam said on her 28 point night. “Keep shooting the basketball and doing what my team needed me to do.”

The Cats dominated the game the entire fourth quarter, and Illinois stood no chance against NU’s offensive power. Along with Pulliam, junior forward Courtney Shaw, who grabbed 11 of the Cats’ 38 rebounds, and Burton got on the board.

With four straight wins under their belt, the Cats look to take on Indiana this Sunday in another competitive Big Ten matchup.

— Women’s Basketball: The rise of Courtney Shaw into Northwestern’s next starting center