Women’s Basketball: The rise of Courtney Shaw into Northwestern’s next starting center 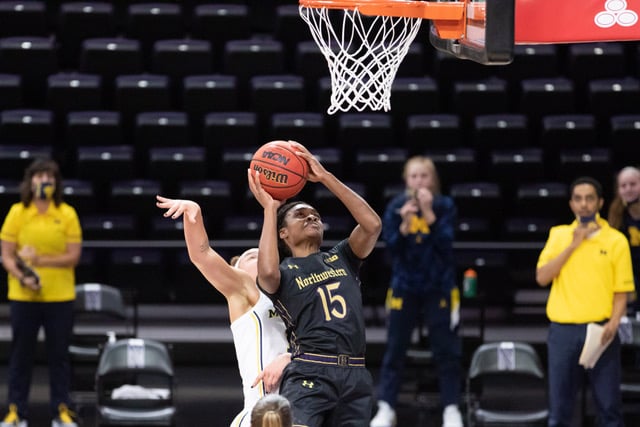 Courtney Shaw goes up for a shot. The junior forward is averaging a career-high 8.0 points and a team-high 6.7 rebounds per game.

On Feb. 29, 2020, senior center Abbie Wolf played at Welsh-Ryan Arena for the final time after leading Northwestern to its first Big Ten title in 30 years.

Six days later, Wolf was replaced in the first half of the Big Ten Tournament quarterfinals by then-sophomore forward Courtney Shaw. Even though the Maryland native averaged only 12 minutes per game in the regular season, coach Joe McKeown subbed her in to provide a spark on both sides of the ball.

Shaw rose to the occasion. On defense, she stifled Michigan’s Naz Hillmon and deflected passes to create Wolverine turnovers. Offensively, she scored on a beautiful pick-and-roll and created a presence in the paint.

When the clock hit zero at Bankers Life Fieldhouse in Indianapolis, the Wildcats scored 59 to Michigan’s 67, a bitter end to a storybook season that ended less than a week later because of the COVID-19 pandemic.

But for Shaw, the game marked a high point in her Cats career. Even though she only racked up six points and four rebounds, Shaw showed McKeown and her teammates that she was capable of changing the pace of a game. More importantly, she proved she was up to the task of replacing Wolf as NU’s starting center.

“When you have a player like Abi Scheid or Abbie Wolf, who have basically been four-year players, two things happen,” McKeown said. “No. 1, you miss them. But No. 2, it also gives other people (an) opportunity. And I think that’s what we’re seeing with Courtney Shaw. She’s getting chances and she’s taking advantage of (them).”

This season, Shaw is playing the best basketball of her career. As a starter, she is averaging a career-high 8.0 points and 6.7 rebounds and is a dominant force in the paint. On offense, she can back down defenders and knock down layups. Defensively, her six-foot frame and shot-blocking ability makes opposing players think twice about going up for a field goal.

The junior center came to Evanston as a three-star recruit and the 19th-best forward in the country. She flourished at both the high school and Amateur Athletic Union level, earning First Team-All County honors and a team Most Valuable Player award at Perry Hall High School, as well as a championship at the Boo Williams Nike Invitational as a member of the Fairfax Stars.

During her first season with the purple-and-white, Shaw saw time in only seven games as the Cats made the WNIT Championship game. With the graduation of forward Pallas Kunaiyi-Akpanah, more playing time was available for her during the 2019-20 season.

That’s when she started to show her skill set. In the season’s fifth game, Shaw dropped ten points and snagged six rebounds against Colgate. Three games later, she chipped in with eleven points in a win over Dartmouth.

Even though she ended the season averaging less than four points and three rebounds per game, a few standout performances from Shaw— like a six-point, eight rebound effort against Minnesota and a nine-point, four rebound outing versus Penn State — set the stage for her breakout junior season.

Nearly a month before NU tipped off the 2020-21 campaign against Eastern Illinois, McKeown revealed that Shaw — who he said gave “great minutes” on the Cats’ conference title-winning squad — would be a big part of the team’s interior gameplan.

“Courtney Shaw is really stepping in,” McKeown said. “She’s playing at the rim, rebounds like one of the great players we had, Nia Coffey, she reminds me. Just the way she attacks the glass.”

Shaw backed up her coach’s words against the Panthers. In a 93-57 victory, she grabbed seven total rebounds and defended the paint with ferocity, blocking three shots. On the other side of the ball, she added four offensive rebounds to spark a then career-high 13 point performance.

“(She) did all the little things that we needed,” Pulliam said. “Played defense, rebounded, posted hard. She did a heck of a job on defense for us taking their big kid out. She made a great debut as a starter.”

Shaw followed up her stellar play with a 10 point, six rebound, two-block, two-steal outing in a 29-point win over Minnesota.

Her first two performances as a starter set the trajectory for her career year.

Shaw’s 60 rebounds through nine games ranks in the top 25 of all players in the Big Ten, while her 8.0 points per game are good for fifth on the team. With guards Veronica Burton and Sydney Wood in the midst of career seasons — and Pulliam continuing her offensive prowess — Shaw’s game in the post elevates NU’s offense to new heights.

Her career-high 15-point game against Wisconsin added to a dominant offensive attack that helped the Cats break a two-game losing streak. Shaw can do the same thing on the defensive end. A career-high 12 rebounds contributed to a victory over Penn State, the Cats’ third-straight in conference play.

Now in her third year in Evanston, Shaw is one of the team’s more seasoned leaders. After a sluggish 84-63 loss to the Wolverines, a blowout which was shown on national television, she worked hard with her teammates in practice to bounce back from their worst loss of the season.

“That’s not something that our team is used to,” Shaw said. “It humbled a lot of us and it took us to the drawing board. A lot of it has to do with the mentality of the team, knowing that we have a lot more games to play, so we have to turn around, get up and focus on our next game.”

The following contest was a 25-point victory against the Badgers.

On Thursday, No. 21 NU will play Illinois for the first time since clinching the conference title last season. Even though the clash in Evanston has a lot less at stake for the purple-and-white, each win is crucial for the Cats to try and repeat as Big Ten champions.

As one of the most improved centers in the conference, Shaw is one of the pieces that can power the Cats to their fourth-straight victory. She is relying on herself to do just that.