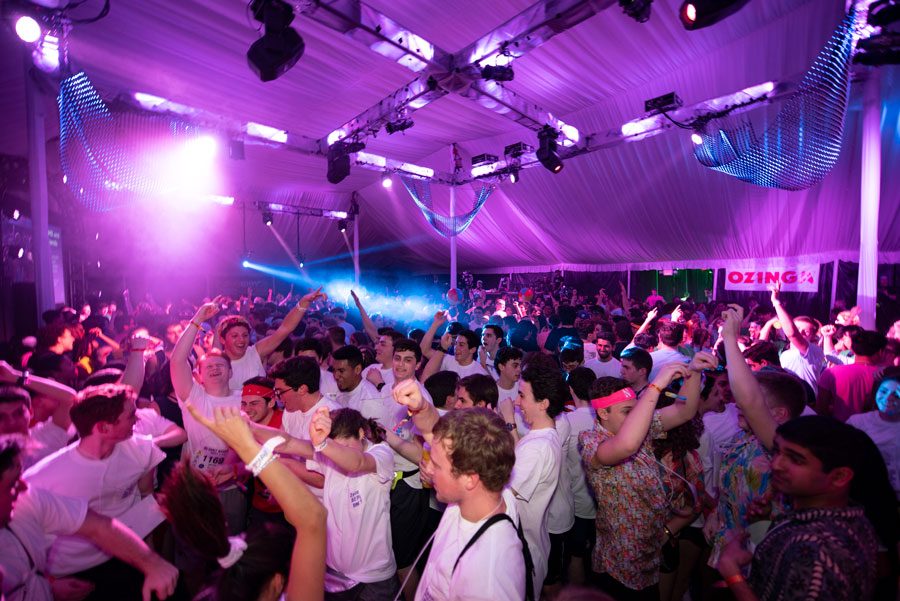 NUDM 2019. The organization will run a mainly virtual version of its annual Dance Marathon from March 3 to 6.

Northwestern University Dance Marathon will run a mainly virtual “Weekend Of” event from March 3 to 6 in place of the annual “NUDM 30 Hours” fundraiser.

According to SESP senior and NUDM Productions Co-Chair Jillian Korey, the fundraiser will include a mix of interactive activities and music and dance performances. Korey said it will be mostly conducted via Zoom, although NUDM organizers are currently discussing hybrid options with NU’s COVID-19 Task Force.

“Our goal for this event is to still bring the community together in a joyous celebration of our fundraising efforts throughout the year,” Korey said.

Korey said this year’s Dance Marathon maintains its typical 10-block structure, but the blocks will be spread out over four days in an effort to mitigate participants’ screen fatigue. According to Korey, the official details of the event will be made public through a reveal that will take place in a couple weeks.

Weinberg junior and NUDM Productions Co-Chair Cady De Camara said NUDM has been adapting its events since the beginning of the pandemic to engage participants as much as possible.

“It’s so hard to feel connected to people when you can only meet them virtually,” she said. “Our biggest focus is trying to bring together — in a virtual space — the NUDM community, the Northwestern community (and) the Evanston Chicago community.”

According to Korey and De Camara, NUDM’s events so far have included weekly trivia nights, a fall gala and a speaker series about this year’s primary beneficiary, Compass to Care. NUDM also runs the BUILD (Bridge, Uplift, Inspire, Learn and Dance) program, which allows participants to directly engage with the primary beneficiary. Later this quarter, NUDM will run Tour de DM, a week-long event filled with DM-related activities.

Korey said one of NUDM’s priorities this year has been increasing knowledge of and engagement with Compass to Care, an organization that helps children with cancer and their families fund their travel to and from treatment facilities.

According to Compass to Care Program Manager Celeste Hall, the charity’s work is all the more urgent during the pandemic, which has limited transportation and lodging options for many patients, especially those who are immunocompromised.

“This is always, but especially now, a demographic that could really use anyone’s help,” Hall said. “A $15 donation, it’s not too big, but the impact is making sure that the family is able to stay another day at the hospital so that their child can be admitted or their child can get chemo. It has such a huge return.”

Korey urges students to get involved with NUDM not only to support their fundraising efforts, but also to have a good time. While recognizing the difficult circumstances, Korey emphasized that organizers have been working hard to make the most of the situation.

“You can still create community, you can still make relationships (and) you can still have fun in the virtual environment,” Korey said. “You just have to adjust your expectations, and sometimes that’s being thankful for the things that can happen. I’m thankful that we still get to have a DM this year, no matter what it looks like.”