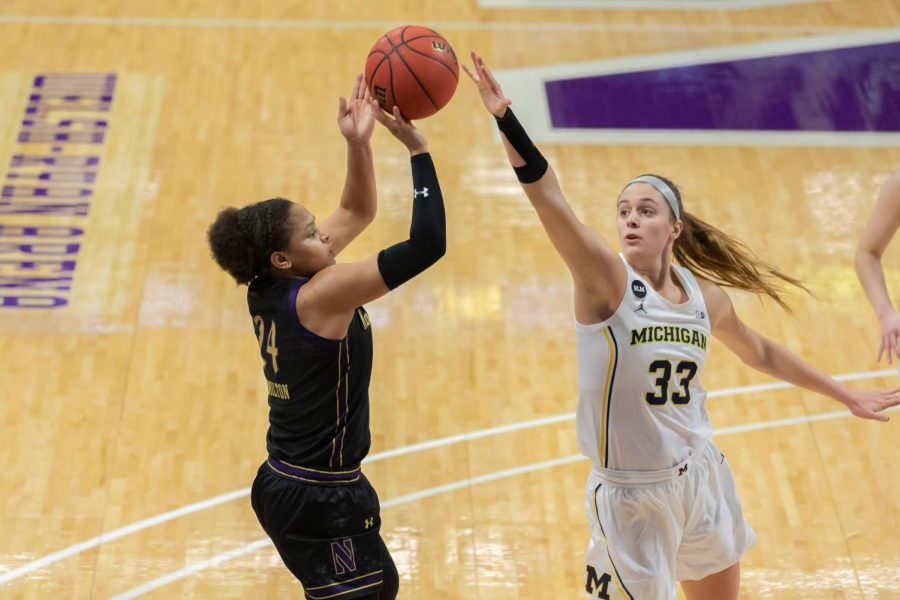 Senior guard Jordan Hamilton pulls up to take a shot against Michigan. After putting up 19 points last week against Iowa, Hamilton scored only 5 against Penn State Sunday.

Northwestern doesn’t lose to Illinois. The Wildcats last fell by the Illini in January 2013. Back when Daniel Day Lewis was winning Oscars for his turn in Lincoln and Joe Flacco was leading the Baltimore Ravens to the Superbowl by way of the Mile High Miracle.

The Cats have won the last nine against Illinois. Some in dominating fashion, like senior day in 2020, when Abbie Wolf led all players with 21 points and nine rebounds as Northwestern won 75-58. Others were close calls, like the January 2015 game when Christen Inman’s 18 points led the Cats to a one-point stunner at the State Farm Center.

NU will look to keep its streak going Thursday night against the Fighting Illini (2-6, 0-5 Big Ten) at Welsh-Ryan Arena. This is the first of the two home games the Wildcats will play this week, battling Indiana this coming Sunday.

But against the Lady Lions, ball security — or its lack thereof — might have been the biggest story.  NU had 22 turnovers on Sunday, the highest single-game total for the Cats since Feb. 2019 against Minnesota.

“We turned the ball over way too much to be considered a great team,” Coach Joe McKeown said bluntly after the Penn State win.

The Cats game-long struggle with turnovers affected both ends of the floor, leading directly to 16 personal fouls and perhaps contributing to a 3-for-16 night from behind the arc. But key players stole the show in the second half. Junior guard Veronica Burton scored 19 pts, senior guard Lindsey Pulliam scored 17, and junior forward Courtney Shaw had a career high 12 rebounds.

The vaunted Illinois offense enters this game averaging 60.1 pts per game on the season. The Cats need to remain dominant on defense — and stop giving the ball away. And they need to improve in the areas they struggled on Sunday, when NU got by on talent and not fundamentals. More accuracy on 3-pt attempts and cleaner shooting strokes will also be imperative for a win against the Illini.

The Cats lacked offensive prowess for most of the game against the Lady Lions, shooting 46 percent overall. Senior guard Jordan Hamilton only had 5 points in the game after totaling a season high of 19 points against Iowa. She made it up for it with a gutsy five steal defensive performance.

Northwestern has the advantage in this game — leading the overall series 45-34, with an at home advantage of 23-13. But the Lady Lions exposed a weak point in NU’s game. So have other teams before, and the Cats bounced back.

“We translate from practice into the game,” Hamilton said after the win against the Hawkeyes. “Going hard, making sure that everything is precise and neat so that we look good and play games well.”

Northwestern’s defense is among the top in the country in terms of aiding its offense in scoring, assisting, and converting points off caused turnovers. No. 12 in assists per game, the Cats play their best when every player is shooting accurately.

“We have to be able to press and control the clock and turn people over,” McKeown said. “We have the quickness to do that.”