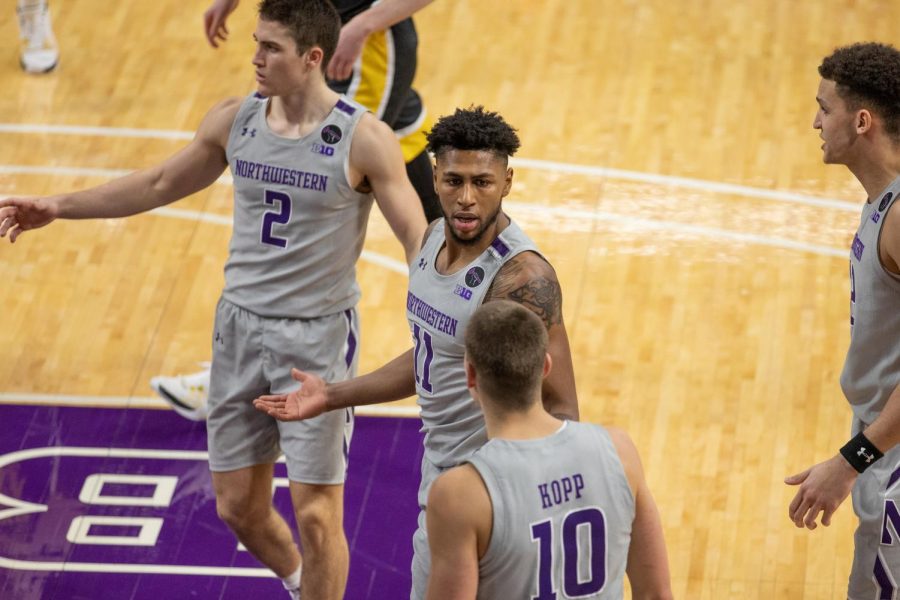 Wednesday marked Northwestern’s seventh straight game against a ranked opponent, this time the No. 10 Wisconsin Badgers.

The Wildcats (6-7, 3-6 Big Ten) contended with their hosts for a half, but defensive struggles and an offense that went silent at all the wrong times, allowing Wisconsin (12-3, 6-2) to pull away in the second half. NU’s 68-50 loss dropped the Cats below .500 for the first time in the 2020-21 season and extended a seven-game losing streak.

Wisconsin took the lead on the opening possession and did not surrender its advantage. The Badgers’ offense took off against the Cats’ much-maligned defense, with Micah Potter accounting for Wisconsin’s first seven points.

After Potter’s early outburst, Wisconsin shared the wealth amongst its scorers to build a 31-20 lead. The lackluster defensive effort negated a solid offensive start from NU.

NU answered back with a 12-5 run, highlighted by a pair of contested corner threes from sophomore guard Chase Audige. By halftime, both teams held field goal shooting averages above .500, though Wisconsin’s clear edge in rebounding and free throw shooting translated to a 41-34 lead at the break.

The Cats’ defense held the Badgers in check to open the second half, but couldn’t take advantage on the offensive end to threaten Wisconsin’s lead. Then, the Badgers pounced, padding their lead with a 12-0 run to take control.

Wisconsin only built on its lead from there. Another Wisconsin double-digit point run turned what had been a highly contested game into a rout and the Cats could not answer.

1. Northwestern’s defense falters in sixth straight loss
Defensive struggles stood out as the common theme in the Cats’ six losses entering Wednesday’s bout against Wisconsin— NU surrendered over 80 points in each of those six losses. The Badgers didn’t shred the Cats’ defense with a star scorer in the image of a Luka Garza or Kofi Cockburn, instead taking it to NU with a balanced offensive attack. Four Badgers ended the night in the double digits for points scored. The Cats’ defense played strong perimeter defense once they pulled within the game and forced the Badgers into eight straight long range misses, but the stand didn’t last. Wednesday marked the first time an NU opponent that scored under 80 points defeated the Cats, but Wisconsin’s opportunistic scoring sealed the win.

2. NU rises and falls on guard play
When coach Chris Collins looked to his team for answers, guards Chase Audige and Boo Buie responded. Audige’s 10 points helped turn a double-digit Wisconsin lead into a two-possession game midway through the first, while Buie shook off his recent shooting slump with a three to start off NU’s second-half effort. In the Cats’ comeback bid, Collins turned to his guards, but the duo couldn’t muster the spark NU needed to catch up. Audige and Buie combined for 11 points after the break and couldn’t flip momentum when Wisconsin made its late moves.

3. Kopp can’t get going
The Cats’ leading scorer from the 2019-20 campaign was just 9-26 from the field over his past three games before taking on Wisconsin. Kopp’s struggles continued against the Badgers, with just ten points, one rebound and no threes in 31 minutes of action. The loss marked three times in the last four games that Kopp failed to top ten points. Kopp’s quiet stretch has robbed NU of its most dangerous three-point shooting threat and hindered the Cats’ ability to climb back into games.