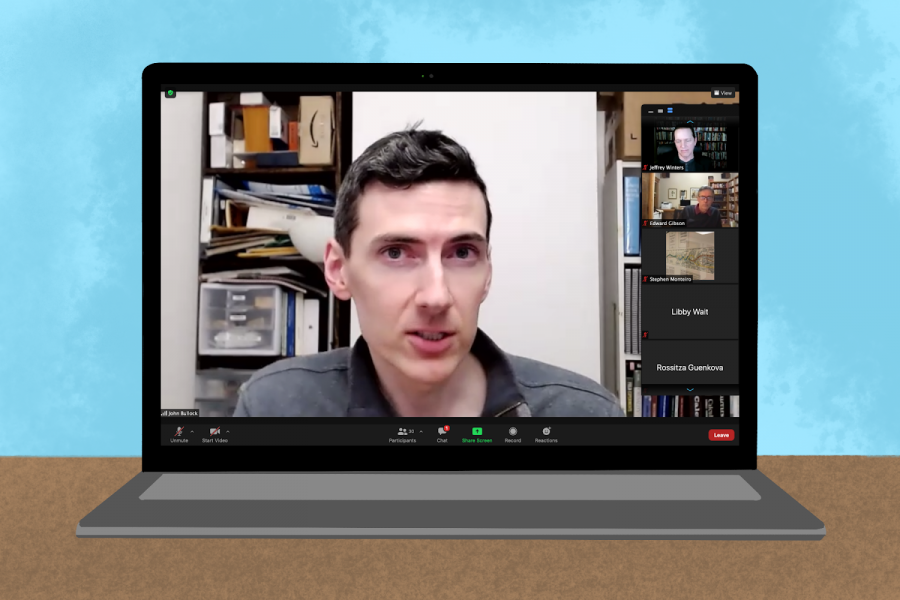 Political Science Prof. John Bullock speaking over Zoom on what the Trump presidency means for U.S. politics. Bullock and several other members of the Political Science Department were part of a Tuesday panel.

Northwestern Political Science Faculty reflected on the Trump presidency and its implications on future U.S. politics in a Tuesday event.

The virtual event, moderated by political science Prof. Wendy Pearlman, featured fellow political science Profs. John Bullock, Ricardo Galliano Court, Laurel Harbridge-Yong and Jeffrey Winters to offer reflections and answer questions on the last four years. The event was held on the eve of the inauguration of Joe Biden and Kamala Harris, marking the end of a fraught transition period.

Bullock said the Republican Party is unlikely to be affected by the Trump legacy in the 2024 presidential election and, considering historical trends, is likely to win back the House of Representatives in the 2022 midterms.

“The idea that there is some critical mass of Republican voters who want to vote Republican but are appalled by Trump and therefore won’t vote for anyone who supported him is detached from reality,” he said.

The insurrection at the U.S. Capitol, Bullock noted, was carried out by people that were “deeply disorganized” and “politically unserious.” However, according to Bullock, the mob did not need to overthrow the government to do serious damage.

“They only need to take a striking action that radicalizes many more people,” Bullock said. “And that is what should concern you a lot.”

Bullock was not alone in his bleak assessment of U.S. democracy. Court dismissed claims that the Republican Party electoral advantage is slipping due to shifting demographics. Instead, he claimed that the Republican Party will continue to enjoy a large electoral advantage due to their control in state legislatures, which impacts redistricting to their advantage.

He went on to speak on the dangers of continued claims of election fraud by Republican officials.

“After four years of pushing this narrative, what happens if this now gets pushed towards a Congress that is now habituated to this idea of overthrowing institutions?” Court said.

Still, Court ended on an optimistic note, saying he hopes for a productive incoming Biden administration.

Harbridge-Yong said increasing ideological polarization has influenced much of U.S. politics. In the 1950s, the two major political parties were criticized for being too similar, and since then, Congress has become more ideologically aligned to opposing partisan stances, resulting in rising polarization.

“Each party thinks they have a chance of gaining majority status in at least one chamber, so this leads the parties to fight on things, even if they could have agreed on an ideological basis,” Harbridge-Yong said. “This leads to partisan fighting on questions of ethics (and) democratic norms that make one side look better and the other side look worse.”

In her work on state legislatures and the U.S. Congress, Harbridge-Yong said she found the main factor that leads legislators to reject compromise is the fear that primary voters will punish them.

Winters attributed the current political turbulence to “White panic,” which he explained is the fear that the majority White population would inevitably lose its majority status and with it, what many view as their way of life.

A student asked Winters what he thought could prevent a possible descent into fascism, to which Winters stressed the importance of the rule of law. He said that Trump’s mystique of evading accountability must be broken and those who crossed the line on Jan. 6 must be held accountable.

“I think we’re in a moment of danger, where our institutions are under threat,” Winters said. “If we do have strong institutions of law, let’s show it.”

CORRECTION: A previous version of this article misquoted Prof. Bullock. It has been updated to accurately reflect his statement. The Daily regrets the error.