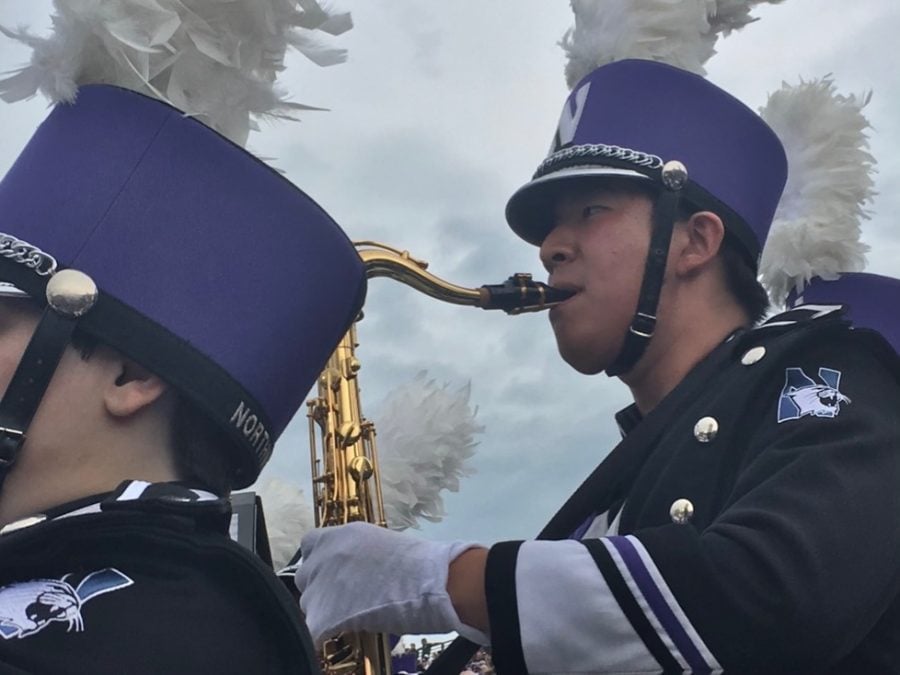 As Northwestern bands remain uncertain about an in-person return date, members have looked for ways to continue practicing and keep up their spirits.

For Weinberg sophomore Alex Tun, Northwestern University Marching Band was a nice reprieve from the rigor of his intense STEM courses.

The marching band “was a great opportunity to bond with fellow musicians who share that passion for music,” said Tun, who met many of his friends through the group last year.

Tun decided to participate in the Northwestern University Concert Band instead this year, due to the virtual format. He said the logistics of band make it harder to do online than, for example, organic chemistry. In a typical week, Tun meets with his peers in Zoom and discusses a piece of music, and then completes a music-based assignment. For his performances, Tun records himself playing his part and sends it in to be compiled into one video.

While keeping up with his instrument is great, he said, it does not compare to a normal football season for the band.

“It is quite a pity,” he said. “It’s fortunate in that opening, better days are ahead where we can reunite musically.”

Communication junior and Alto Saxophone section leader Mia Hodges is also hoping for an expedient return to in-person practice. While she understands and applauds the decision to stay remote, Hodges said being online, even in the most social capacity, will never replace band camp, traveling to bowl games and spending countless hours with her peers in NUMB.

The transition online also presented many challenges to NUMB leadership, among them being increasing sociability; Hodges said this area was one focus for leadership this past fall season.

“We wanted to make sure that for the incoming people, whether they are transfers or freshmen, they have an opportunity to make Northwestern connections outside of classes,” Hodges said.

The group has held what Hodges compared to “date nights,” where band members could socialize with others in their home school and specific majors.

On game days, they would tune into Zoom rooms and send their signature chants in the chat rather than yell them out loud. Hodges said she enjoyed football games this year because she has always loved the “community aspect” of marching band more than anything else. However, she added nothing short of normalcy will “recreate actually being at a football game.”

Weinberg freshman Joey Pollack joined Northwestern’s Concert Band this past fall quarter. For Pollack, being in an ensemble meant he could continue performing like he did in high school.

While band hasn’t been as social online as it usually is in-person, he said practicing music has been even more challenging during remote meetings. Out of all of his clubs, Pollack said Concert Band has been the hardest to “make work.”

“It’s a different energy; it requires something different of you,” he said. “Most of the work you have to do is on your own.”

After Wildcat Wellness ended, Bienen and Communication freshman Caroline Weiss attended her first in-person rehearsal for Northwestern’s Symphonic Band. Before rehearsal, she said a socially-distanced “hello” to her fellow band members, who were at least nine feet away the entire rehearsal.

Weiss said it was strange playing in an ensemble for the first time in months, but she appreciated the familiarity of adhering to rehearsal etiquette. She and her band members also share a responsibility to mitigate the spread of COVID-19.

“You can tell that everybody really has this desire to go back and play in person, and they’re going to do whatever they can to do it in the safest way possible,” Weiss said. “They’ve made their efforts clear and that’s really appreciated by me and all the other students too.”

Correction: A previous version of this story stated that Alex Tun was in Marching Band this year. Tun is no longer in the Marching Band and is currently in Concert Band. The Daily regrets the error.