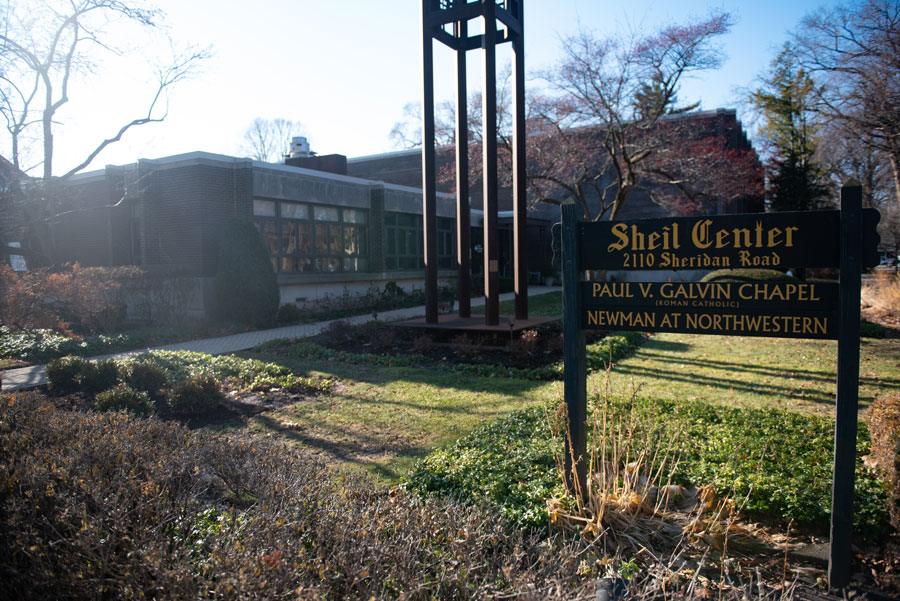 Sheil Catholic Center. Catholic students and faculty hope that Biden’s faith will guide him to work toward Catholic social goals such as racial and socioeconomic justice, as well as preserve the sanctity of life.

When Joe Biden places his hand on the Bible to be sworn in on Jan. 20, he will become only the second Catholic U.S. president in history.

At Northwestern, some Catholic students are looking forward to a presidency guided by Catholic values, while others question Biden’s commitment to them.

For Weinberg junior Mary Grace Ramsay, the president of the Catholic Students Association at NU, having a “man of faith” in the White House will be a welcome change compared to former president Donald Trump, who she thinks has no sense of Christian principles.

Ramsay didn’t support Biden in the Democratic primary, but now she sees Biden as compassionate and caring for the most vulnerable, which she said are both important aspects of Catholic social teachings.
“Especially with COVID and everything going on right now, that’s just going to be so important,” Ramsay said, “We’re just not seeing that in leadership right now.”

Father Kevin Feeney, the director of the Sheil Catholic Center, is hopeful that Biden’s relationship with the faith will help him bring attention to issues such as racial injustice, immigration, the environment and poverty, all of which are rooted in Catholic social teachings.

But “at a time when human life seems so cheap and there’s so much violence,” Feeny particularly hopes Biden can champion one aspect — the dignity of human life.

“I would like to see a stronger stance by the president and by our politicians advocating for human life,” he said. “And see if we could eliminate some of the issues like poverty, violence that sometimes lead folks to have abortions.”

Given Biden and the Democratic Party’s support for pro-choice policies, Feeney said he knows it will be a delicate dance politically. But he still hopes Biden will “inject into the conversation a greater attention to the protection of vulnerable human life” because the church sees it as a “basic justice issue.”

As much as Feeney is encouraged to see a man who grew up in the same faith in a position to unite the country, he is equally frustrated by the divisiveness within the Catholic community. Exit polls show that American Catholics are roughly evenly divided between Democrats and Republicans, a trend that has developed in recent elections.

While she said Biden is “clearly more pro-life” on issues such as healthcare, gun control and opposition to capital punishment, there are also conservative Catholics like Weinberg junior Christopher Kapic who believe Biden isn’t fully committed to Catholic values.

“My contention is that he does not profess the Catholic faith,” Kapic said, citing Biden’s public support for abortion and a line in the Catechism of the Catholic Church that forbids “formal cooperation in an abortion.”

Kapic, who voted for Trump, said he fears Biden will mislead the public on what being a Catholic means and should be publicly excommunicated by the United States Conference of Catholic Bishops.

Per Kapic’s estimation, the Catholic community at NU is “very progressive” and traditional Catholics like himself are in the minority.

Religious Studies Prof. Robert Orsi, who focuses in particular on American Catholicism, attributed the division within the Catholic community to the liberalization of Catholicism and the resulting push back against it since the Second Vatican Council in the early 1960s, which put social justice at the core of the Catholic faith.

In Orsi’s view, that explains why Biden’s Catholicism was a non-issue in the election for non-Catholic voters but sparked fierce opposition from conservative Catholics. In contrast, John F. Kennedy’s Catholic faith invited questioning during his 1960 presidential campaign, but Catholic voters united behind him to make Kennedy the first Catholic president.

Despite qualms from conservative Catholics like Kapic, there is no doubt in Orsi’s mind that Biden is “a very good Vatican II Catholic” whose political life is “grounded in his faith.”

“In that way, Biden might be the first Catholic president,” Orsi said.

— Augustine: Catholicism in the age of #MeToo