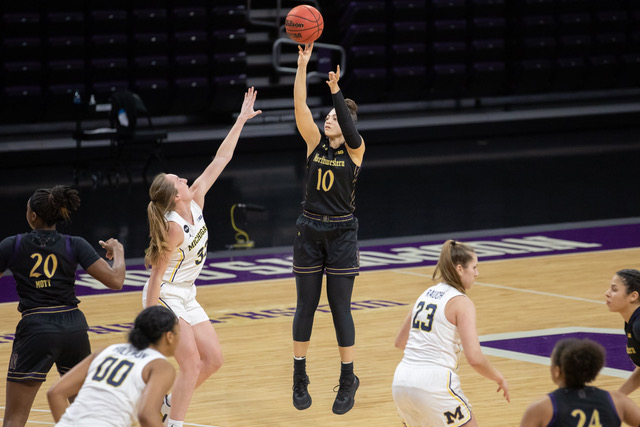 Lindsey Pulliam takes a jumpshot. The senior guard finished with 17 points in No. 22 Northwestern’s win over Penn State.

With three minutes left in the first half of No. 22 Northwestern’s matchup against Penn State, Lady Lions forward Johnasia Cash made a layup to cut the Wildcats’ lead to five.

NU, up 21-12 just moments before, found itself on the wrong side of a 6-2 run from the Lady Lions and needed to regain control quickly.

So they turned to one of the best backcourts in the Big Ten.

Junior guard Veronica Burton added a free throw and a layup, senior guard Lindsey Pulliam made a pullup jump shot and junior guard Sydney Wood contributed two second-chance baskets to help the Cats end the second quarter on a 9-0 run. Their offensive success carried over to the other side of the ball, as Penn State had four turnovers.

When it was all over, NU held a 32-18 halftime lead, one it did not relinquish. Behind 49 combined points from Burton, Pulliam and Wood and a stout defensive effort that forced 27 turnovers, the Cats (7-2, 5-2 Big Ten) defeated Penn State (4-6, 1-5 Big Ten) 67-50 for their third-straight win in conference play.

“We turned them over,” coach Joe McKeown said. “ You’re getting into the heart of the Big Ten, so every game is a dog fight. You just got to be ready, especially on the road.”

Even though NU held the Lady Lions to a 37 percent shooting percentage from the field and grabbed 17 steals — its second-most steals of the season — the purple-and-white gave its opponent more chances to score than usual.

The Cats committed a season-high of 22 turnovers, the team’s most since a Feb. 2019 matchup against Minnesota. Heading into Sunday’s game, NU averaged 10 turnovers per game, the third-fewest in the country.

Taking the place of Abbie Wolf at the center spot, Shaw has flourished in her new role with career-high averages of eight points and 6.67 rebounds per game. At the Bryce Jordan Center, the Maryland native grabbed six offensive rebounds en route to a career-high 12 boards. Her performance catalyzed NU’s 42 points in the paint and eight second-chance points.

“For us to be successful, she has to have a presence defensively and on the glass and (turn) some of those offensive rebounds into buckets for her teammates,” McKeown said. “I thought she did all of those things. She’s getting herself in really good positions. ”

Burton — who finished with 19 points — opened the scoring with a 3-pointer 25 seconds into the game. Five minutes later, senior guard Jordan Hamilton drained a triple. The Cats soon added eight more points to take a 14-10 lead at the end of the first quarter.

To start the second period, Pulliam drained a jumpshot to extend NU’s lead to six. It marked her first basket of the game after missing all six of her shots in the first quarter and the beginning of a 17-point stint. An and-1 sequence from Wood — who finished with 13 points — and two points from sophomore guard Kaylah Rainey soon extended the lead to nine.

Meanwhile, Penn State went one-for-eleven from the field until fewer than five minutes remained in the quarter. The Lady Lions would cut the Cats’ lead to 23-18 before falling victim to NU’s late run in the final minutes of the half.

The Cats would extend their lead to as many as 22 in the second half and let it slip to no lower than 14 as the team cruised to its fourth-straight victory over the Lady Lions.

As the Cats return to Welsh-Ryan Arena Thursday to take on in-state rival Illinois, McKeown shared seven words to represent his team’s performance.