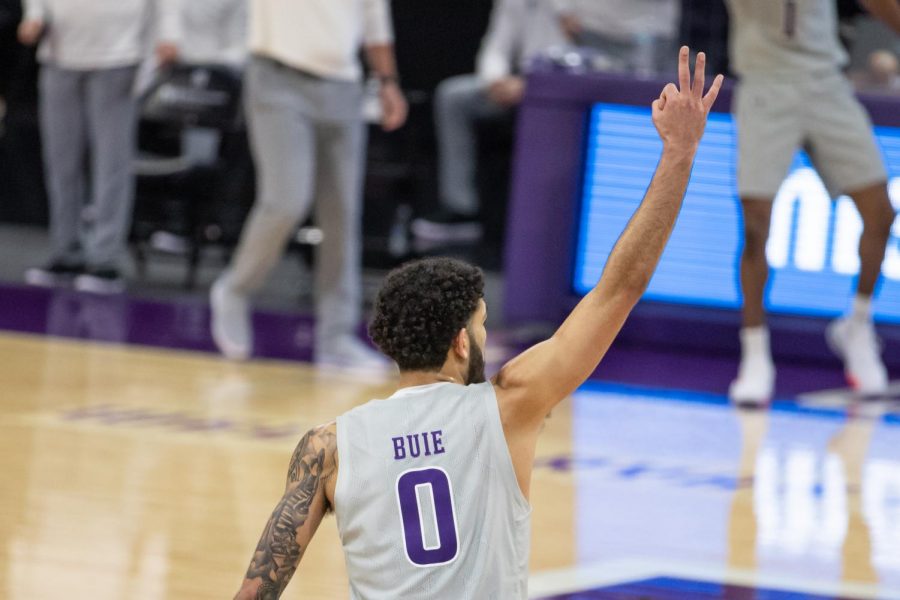 Boo Buie gestures after making a shot. The sophomore guard scored 18 points, including 12 from behind the arc, in Saturday's loss to Penn State.

Sunday morning’s nationally televised Big Ten matchup between Northwestern and No. 5 Iowa saw the Hawkeye offense eviscerate the Wildcats in a 96-73 win.

“We knew what we were facing against Iowa,” coach Chris Collins said. “They’re truly one of the elite teams. In order to compete and have a chance to beat a team like that, you have to play at a really high level on both ends, and we fell short of that.”

The Hawkeyes got out to a strong start early, racing to a 19-9 lead. But three consecutive three-pointers from Buie helped the Cats pull back into the game.

Buie had put together a string of rough performances in recent weeks. He scored just five points on Wednesday against Ohio State and found himself off the score chart entirely against Illinois and Michigan. On Sunday, Buie scored 12 points, his first game in double figures since Dec. 26 against Ohio State.

Buie’s success from three early put NU up by one with eight minutes to play in the first. But after that, Iowa went on a 13-0 run that the Cats couldn’t recover from.

“We did a good job settling into the game,” Collins said. “We took the lead there at 29-28. Then the rest of the half was a big run by them, culminating in the turnover there, where they were able to score on the last possession of the first half.”

Coming out of the break, things only got worse. By the under-12 timeout, the Hawkeyes had stretched the lead to 27 points.

Though Iowa shot 57.9 percent in the game, All-American forward Luka Garza didn’t score a single point in the second half. Even without any scoring from the Hawkeyes’ best player, NU couldn’t string together a run and bring themselves back into the game.

“Our inability to score early in the half took some of the energy out of us on the other end,” Collins said. “That can be human nature. When you don’t see the ball go in, it’s tough to continue to have that fight defensively…we just can’t have that. We have to continue to fight whether we’re scoring or not scoring.”

With another top ten opponent coming up on Wednesday in No. 9 Wisconsin, the Cats’ schedule isn’t getting any easier. As the team approaches the midpoint of the season, they have to find ways to beat conference opponents.

Both Collins and junior guard Ryan Greer, who scored a career-high 10 points Sunday, said they aren’t sure what the team’s identity looks like.

“We are developing who we are,” Collins said. “It’s hard to see an identity when you lose to top 10 teams. It’s hard. These teams are really good. There’s a reason they’re in the top 10, they don’t lose much. We have to come into these games, we have to try to prepare, be us, play to our strengths, try to do the best we can and find a way to get some wins.”

—Men’s Basketball: No. 10 Iowa’s hot shooting brings down No. 19 Northwestern