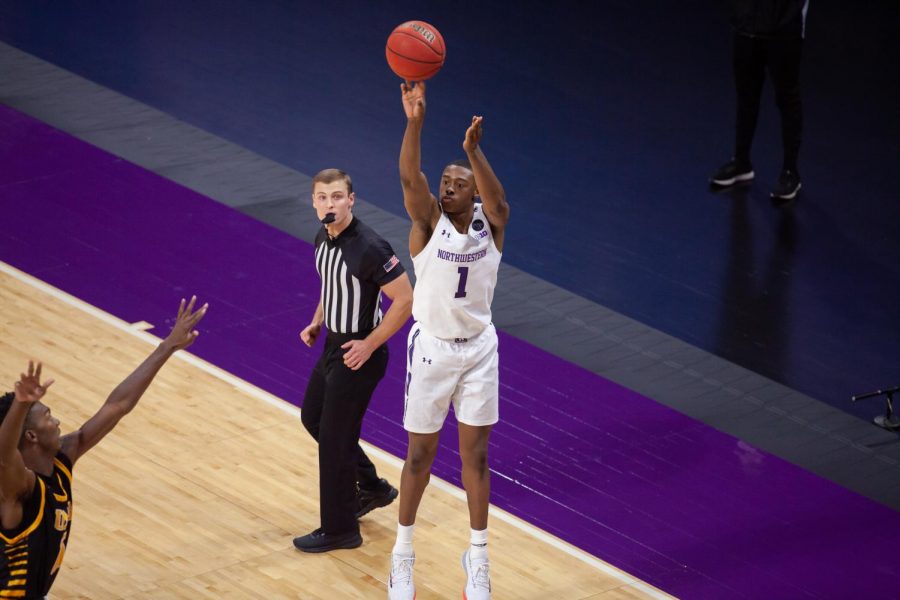 Chase Audige tries a three-pointer. Audige scored a career-high 25 points against No. 21 Ohio State, but couldn’t get going from three-point range, finishing the night 1 for 7.

In its blistering 6-1 start to the 2021 season against No. 21 Ohio State, Northwestern relied on the three-point shot, hitting 42.2 percent of tries from beyond the arc to knock off two ranked teams and rise to No. 19 in the country. On Wednesday evening, Wildcats died by the three-point shot, increasing their losing streak to four games.

NU tried 23 three-pointers in its 81-71 loss to the Buckeyes and made just six, its worst night from downtown percentage-wise since a 3 for 15 showing at No. 24 Wisconsin on March 4, 2020. The Cats’ struggles were magnified in the first half, when a 1 for 11 performance loomed large as Ohio State jumped out to a 42-33 halftime lead.

“You gotta try to find other ways to score (when you’re missing threes),” coach Chris Collins said. “Can you get yourself to the free throw line? Can we get the ball inside to (redshirt sophomore center) Ryan Young, to (junior forward) Pete (Nance), to some of those guys in the paint?”

Young’s efficient post play — nine points and three rebounds on just five field goal attempts – helped keep NU within striking distance for much of the contest, even as the Cats’ long-range attack sputtered. In the first half, redshirt sophomore guard Chase Audige was 1 for 4 from the three even as he rolled up 21 points. Sophomore guard Boo Buie missed all three three-pointers he attempted, while junior forward Miller Kopp and first-year guard Ty Berry missed two apiece.

NU’s futility from the arc finally showed signs of abating midway through the second half. Kopp drained two threes in a 30-second span to pull the Cats within 53-48 with 13:54 to play. After a neck-and-neck six minutes that saw three more NU misses, Nance connected with 5:11 left to whittle the Buckeyes’ lead to four. Less than a minute later, Buie sank a deep three that trimmed the deficit to just 67-66 — his first field goal since the Cats’ loss to No. 4 Iowa on December 29, a funk spanning two games.

“I just want him to stay confident and keep playing his game,” Collins said of Buie. “He’s the kind of kid where if he sees the ball go in, it can turn quickly for him. He got fouled, he hit two free throws, and then he made a big three.”

Ohio State promptly blitzed NU after the under-four timeout, ending the game on a 11-5 run to clinch victory as Audige and Buie each missed threes in the final minutes. But Collins praised his team’s resolve in the face of both a dearth of successful threes and an offensive onslaught from the Buckeyes.

“Our guys hung in there,” he said. “I told them, ‘You’re at the four-minute timeout and it’s a one-point game, you’re right where you need to be.’ We just weren’t able to finish the last four minutes the way we needed to.”

— Men’s Basketball: Northwestern hopes to rebound in rematch with No. 21 Ohio State

— Men’s Basketball: “A tale of two different games” as Northwestern’s double-digit lead evaporates in loss to No. 12 Illinois