Audio drama reimagines “The Glass Menagerie” through a Chinese-American lens 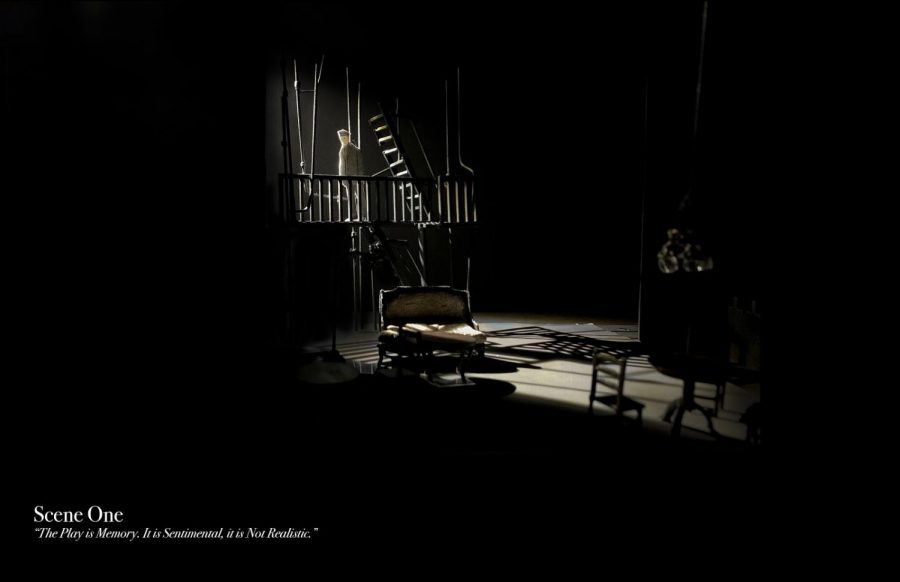 Set and costume designs for the “The Glass Menagerie.”

Discouraging the pursuit of the arts. Pressuring daughters to get married. Balancing familial responsibilities with personal dreams.

These were elements of Tennessee Williams’ “The Glass Menagerie,” which MFA directing student Alvin Chan said resonated with him and his Chinese-American upbringing. These connections prompted Chan to direct a reimagining of the classic play through the lens of a Chinese-American family.

“It was something that you would never have thought of before,” Communication sophomore Jared Son said. “But as soon as you read it that one way, it changes the way you think of the play forever.”

Son plays Tom Wingfield, who lives in 1930s St. Louis with his mother Amanda (Emily Zhang) and shy sister Laura (Hannah Julie Yoon). Amanda is determined for her children to have a better future, discouraging Tom’s aspirations to be a poet and hoping Laura will marry a “gentleman caller.” The audio drama was available on-demand through the Wirtz Center from January 8-10.

Originally created to be performed onstage in spring 2020, Chan changed the production into an audio drama when the COVID-19 pandemic hit. Since three of the four original cast members were seniors, he had to recast the roles of Tom, Laura and “gentleman caller” Jim O’Connor (Remy Laifer).

To produce “The Glass Menagerie” remotely, every actor got a recording kit to record their lines during cast Zooms, creating some technical challenges.

“The mic really picks up everything,” Son said. “The technology was a struggle because every time you recorded something, if something went wrong on one side, you had to record both people again.”

However, Son said he felt that the moments of connection and conflict between characters still shone through.

Communication junior Emily Zhang, who stayed on from the original cast, said it was “heartbreaking” when the pandemic halted production.

“Last spring there were supposed to be two shows going up in Northwestern’s mainstage season that had Asian leads in it,” Zhang said. “It was going to be such a season for Asian representation. And we lost that.”

Despite the obstacles, Chan said he was still able to keep the integrity of the original idea, which was the most rewarding part of the process. With a 75 percent Asian cast, Chan honored his vision to have actors who could understand his point of view on the play.

Chan said part of his mission as a director is to bolster Asian American representation.

“If I’m not picking stories that help to add and give more opportunities for representation, then I’m not doing everything I can be doing for my community,” he said.

Last winter, Zhang began working with Chan to develop the accent she uses in the play. Growing comfortable with using the accent was an emotional hurdle for Zhang, because she has seen it used to strip people of their power.

“We wanted to make sure that it’s not a mockery. It’s just true to the experience,” Zhang said.

Zhang noted that Asian characters in popular media often don’t have many speaking roles, or are silenced. Something she said she loved about “The Glass Menagerie” was that all the characters do is talk.

Zhang said the experience of working on “The Glass Menagerie” has shown her that it is worth telling stories of her identity, and with people of her identity behind the table.

“I’ve never seen my experience centered like this, in all its truth,” Zhang said. “It’s truly art made by and for people who hold this identity.”