Men’s Basketball: Northwestern hopes to rebound in rematch with No. 21 Ohio State 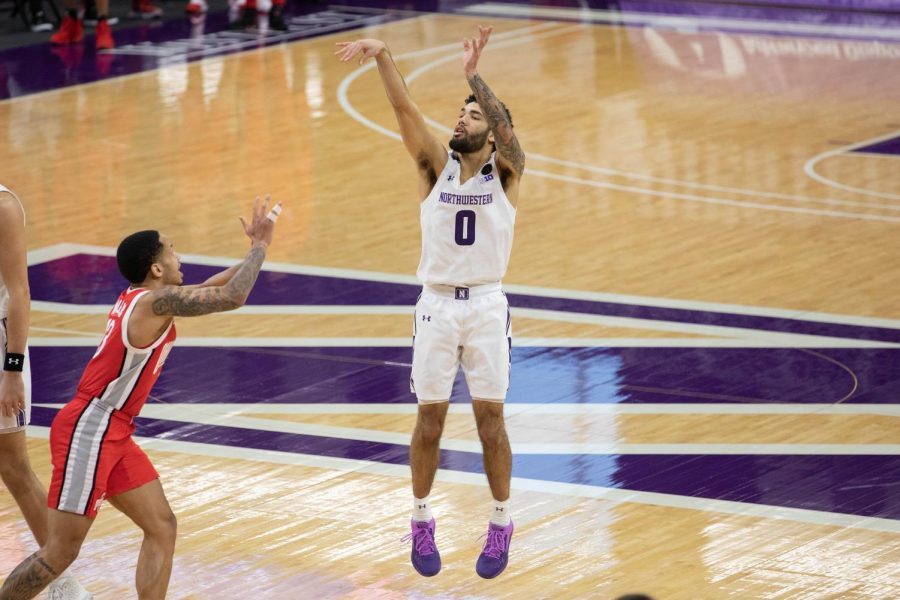 Boo Buie takes a three. The sophomore guard has struggled recently after strong performances early in the season.

When Northwestern last played No. 21 Ohio State on Dec. 26, the Wildcats were 2-0 in the Big Ten and one of the biggest surprises of the season. The win got them to 3-0 in the Big Ten for the first time since 1968.

Wednesday’s matchup in Columbus stands as an important opportunity for NU to end its losing streak. In the Dec. 26 contest, the Cats rallied back from a seven-point deficit late in the second half to win the game 71-70.

“They believe that they are supposed to win,” coach Chris Collins said of his team after the game. “Even when we were down with four minutes to go, they were talking about winning (and) getting stops.”

That was then, this is now. NU will need its early season mentality to pull out another win against a tough Buckeyes team.

Inconsistent guard play has been a pressure point in the Cats’ losing streak. Sophomore guard Boo Buie hit the game-winning shot against the Buckeyes back in December, and grabbed the game-clinching rebound. But Buie is scoreless in his past two games, and played a season-low 15 minutes against Illinois after getting into foul trouble.

“I want (Buie) to stay upbeat,” Collins said postgame on Thursday. “We got to get his confidence back. There’s no question he’s had a couple of tough nights shooting the basketball after playing incredibly well the first three games. My staff and I, we believe in him. We can help him.”

Junior guard Ryan Greer played good minutes in his absence, but only scored two points in that game, and hasn’t scored more than six points in a game in his career.

The Buckeyes also enter the game with questions at point guard. Starting point guard C.J. Walker is out on Wednesday with a hand injury. Backup-turned-starter Jimmy Sotos injured his shoulder at Rutgers on Saturday and will be a game-time decision, head coach Chris Holtmann said Tuesday on his radio show. The remaining point guard on the roster is freshman Meechie Johnson, who reclassed this year to get a head start at Ohio State.

To win in December, NU locked down defensively in the final minutes, held the Buckeyes to 20 percent from behind the arc and took advantage of turnovers to score 20 points on those takeaways and 14 points in transition.

To win on Wednesday, the Cats will need to break out of the offensive funk that plagued them in the second half against Illinois and throughout the game against Michigan. In those two contests, NU shot 32.7 percent and 41.3 percent from the field respectively, and 30 percent and 27.8 percent from three.

“That’s part of basketball,”  Collins said postgame on Thursday. “It’s taking the temperature of, are we doing what we are trying to do? Are we getting the right shots?”

— Men’s Basketball: Northwestern seizes a win over No. 23 Ohio State in closing minutes

— Men’s Basketball: “A tale of two different games” as Northwestern’s double-digit lead evaporates in loss to No. 12 Illinois