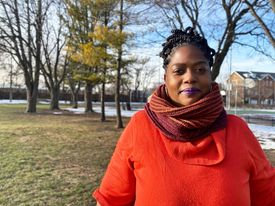 As a child in the 2nd ward, local activist Darlene Cannon said she felt surrounded by a warm community.

“When I was growing up with all of my neighbors, we were more of a true village,” Cannon said. “So everyone was always looking out for one another.”

This year, the third-generation Evanston resident said she is pushing to bring dialogue and participation back to the forefront of the 2nd ward in her race against incumbent Ald. Peter Braithwaite (2nd) in the upcoming municipal election.

Cannon is a member of the Democratic Party of Evanston, a founding member of grassroots coalition group Evanston United and the founder of Feeding the Village Evanston. If elected to the position, Cannon promises to advocate for racial justice, remedy housing inequity and increase dialogue with residents.

Cannon’s passion for housing equity in Evanston can be traced back to the Great Migration, during which her grandparents moved to Evanston’s 5th Ward. Evanston’s 5th and 2nd wards are historically Black, an effect of redlining and racialized zoning ordinances, she said.

In 2018, she protested against the construction of an affordable housing unit funded by the nonprofit Housing Opportunities for Women. The unit, which is on the corner of Dempster Street and Pitner Avenue, was not popular with 2nd ward residents because they were not consulted about the decision, Cannon said.

“We were told by city employees that this was what they envisioned for our neighborhood,” Cannon said. “I just didn’t understand how you could have a vision for my neighborhood that did not include me. I wasn’t at the table when this decision was being made, but it was being forced upon me, and there was nothing I could do.”

For Cannon’s most recent community project, Feeding the Village Evanston, she connected with Bruce King, another third-generation Evanston resident, to assist families experiencing food insecurity. With Cannon as executive director, the group came together during the initial coronavirus lockdowns in early March after King approached her about a surplus of food in his commissary.

Cannon said she was flattered that King chose to come to her instead of Braithwaite, and she decided to organize a distribution system that would forward the prepackaged meals to Evanston residents.

King, whose family dealt with redlining during the Great Migration, can recall a time where Evanston’s Black community was incredibly well-knit, even in the face of racist housing and zoning policies.

He said his memories of racism in Evanston, coupled with the city’s history of discriminatory housing policies, have eroded his faith in local government.

“Honestly, I’m not a fan,” King said. “I don’t see any great things, you know, to look back upon as something that politicians did. I remember personally when Blacks were not allowed to be left of East Sherman after six o’clock. I don’t think representation has been all that great.”

King says that his childhood experience in the 2nd ward was comforting, as he remembers living with community members who supported each other through thick and thin. With the changes Evanston has undergone since, he said he’s glad community-oriented and Evanston-raised residents like Cannon are fighting for seats at the table.

Cannon said as an Evanston resident, she has not found communicating with aldermen to press for change entirely effective. While she was campaigning for signatures for her petition to run, she found that several 2nd ward residents shared the same opinion.

Cannon’s commitment to amplifying local voices stretches back to Cannon’s involvement with  the Evanston Voter Initiative. In 2020, the organization filed a petition to increase residents’ power to pass city legislation.  EVI’s proposed referendum was ultimately kept off the ballot.

Cannon is also looking to form relationships with Black-owned businesses and banks so Evanston can advance racial justice beyond its reparations fund, she said.

According to her campaign manager, Jersey Shabazz, Cannon is well-connected in the 2nd ward because she has a track record of advocating on behalf of residents. Part of her campaign includes founding initiatives to introduce more frequent community dialogues and regular community surveys.

Shabazz said Cannon’s intersectional identity as a Black woman also enables her to understand the needs of marginalized residents.

“She knows the community’s needs, and she knows these things because she’s in connection and in dialogue with them,” Cannon said. “That’s the most important work.”