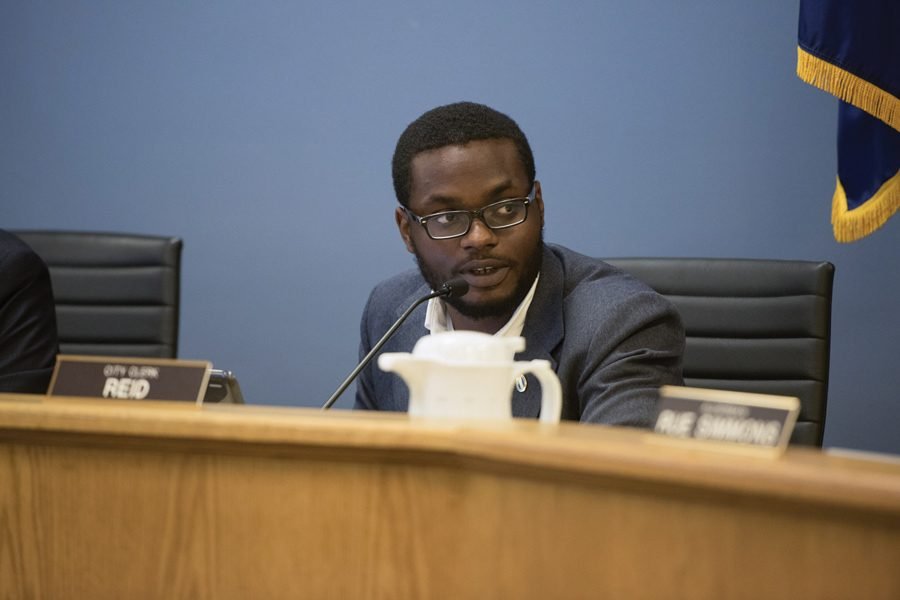 City clerk and 8th ward challenger Devon Reid. In an open forum Thursday night, Reid spoke about his plans for addressing racial injustice and working with the community.

Affordable housing, racial injustice and climate action were on the table during an open forum featuring candidates and incumbents running for election in the 2nd, 4th and 8th wards Thursday night.

One of the main portions of the forum surrounded the issue of racial injustice. Reid said he has been working with City Council on reparations and reallocating resources away from the police.

“Issues of equity are key to my heart,” Reid said. “I am someone that has survived foster care, homelessness and two parents in prison — for me, it’s making sure that we are bringing people least proximate to power closer to power.”

Residents who were lined up to ask questions chose to yield their time back so more candidates could also weigh in on their plans to address racial injustice.

Both Cannon and Goldring emphasized the need for an independent review board to review police complaints, specifically not appointed by the mayor.

“(The board) would look at the current policies we have in place and determine how they impact marginalized communities, Black and brown communities and average working people to see what we can do to improve that,” Cannon said.

Nieuwsma chose to tie his answer about racial injustice into climate action. Specifically, he spoke about the Climate Action and Resilience Plan, a plan which aims for Evanston to be carbon neutral by 2050.

“Climate action is social justice and racial justice… it’s going to be the Black and brown communities and marginalized residents who are most affected (by climate change),” Nieuwsma said. “The CARP plan centers on equity.”

However, Nieuwsma said there is still work to be done on CARP, calling it a “visionary aspiration” as opposed to a detailed plan.

The last portion of the forum focused on affordable housing, with a question directed specifically to Cannon.

“We often in this city allow outsiders to come in and dictate to us what they want to build, not what we need or even what citizens desire or envision for their neighborhoods,” Cannon said. “We go by what developers want to do, and it’s time that we change that… affordable housing is a right just like healthcare is a right.”

Correction: A previous version of this story misstated the ward in which city clerk Devon Reid is campaigning for alderman. Reid is a candidate for alderman in the 8th ward. The Daily regrets the error.