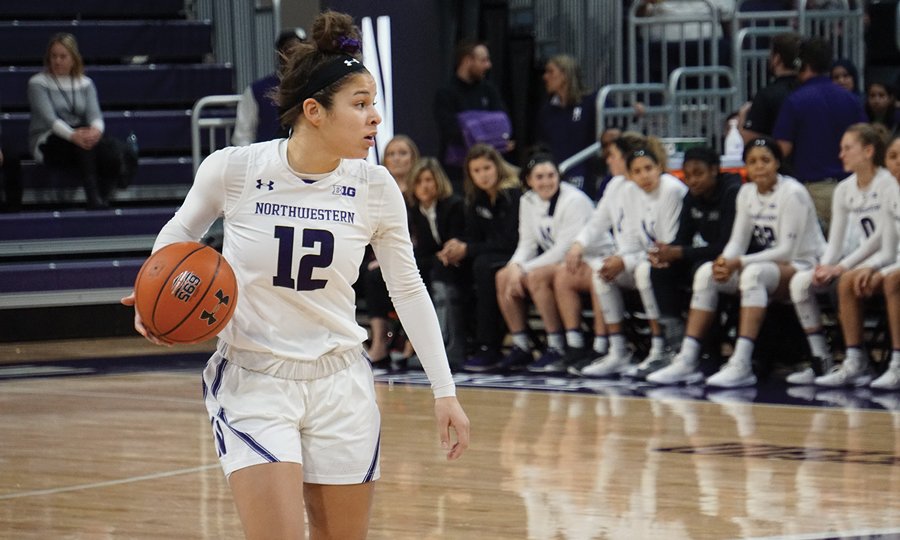 Veronica Burton dribbles the ball against Indiana in Jan. 2020. Against Wisconsin today, she was dominant, scoring 15 points, grabbing 9 rebounds and compiling 4 steals.

Northwestern needed today to go right. After a miserable week, which included two straight losses in the Big Ten contests for the first time in two years, senior point guard Lindsey Pulliam and her team dominated Wisconsin to the tune of an 80-55 scoreline.

Four starters ended the night in double figures, including junior forward Courtney Shaw and junior guard Veronica Burton who each led the way with 15 points. Pulliam had 14.

“We were trying to send a message,” said Shaw, whose 15 point outing set a new career high. “Especially because we think that Michigan came in and they did that to us. We didn’t match the energy that they came out with. So today that was the emphasis. We wanted to run them out of the gym.”

It was the opposite against the Wolverines over the weekend. The No. 22 Cats (5-2, 3-2 Big Ten) lost by 20 to a Big Ten opponent on national television and at home. They were victimized defensively by Michigan’s superstars, Naz Hillmon and Leigha Brown. A lot of that came down to what Shaw called a lack of energy.

“That’s not something that our team is used to. We’re on national television, we care about those things,” Shaw said. “We’re like ‘wow we looked like that.’ It kind of humbled a lot of us and it kind of took us to the drawing board.”

Wednesday’s matchup at the Kohl Center saw a different Northwestern. Things were shaky at the start, as the Cats struggled to make shots against a Wisconsin (3-5, 0-5 Big Ten) team still in search of their first Big Ten win of the season. Both teams missed easy jumpers and failed to build sustained offensive runs, but NU left the first frame of play up 16-13.

The Cats shot poorly in the first quarter. What saved them? Wisconsin shot worse. The Badgers hit on just five of 16 attempts, making three of eight from behind the arc. NU was led by Shaw’s efficient seven-point quarter. She sank three of four shots and grabbed three rebounds in the process.

The Cats took over in the second frame of play. That’s when shots started coming down. At first, it was all Pulliam. She keyed NU’s offense at the beginning of the quarter, putting points on the board with lightning speed, capitalizing on Wisconsin turnovers. Burton came alive too. She had seven points, two steals and two assists in the quarter, catalyzing a mid-quarter 8-0 run that saw the Cats continue to run up the score.

When it was over, they led 48-25. The 32 points scored by NU in the second frame are the most the team has scored in a quarter all season.

“Honestly there was even a point I was on the court and we were shooting free throws,” Shaw said. “I looked up at the score and I was like ‘oh we’re up by a lot more.’ I think when we get in a zone of just playing, we don’t even notice when we go up by that much.”

From then on, the game looked easy. When the Cats play the game at their preferred speed, they’re hard to stop. They corral deflections, they’re in the passing lane. They go fast. And they’ve got the passers: Senior guard Jordan Hamilton and Burton. Hamilton has eight assists Wednesday. Pulliam had four.

And they scored off of turnovers. NU finished the game with 17 steals, 10 of them came in the first half. In the first two quarters alone, they turned those steals into 13 offensive points. Junior guard Sydney Wood helped lead that defensive showcase, pulling in an astounding four steals all by herself.

“We call her positionless because really we got her playing power forward, point guard,” Coach Joe McKeown said of Wood. “She’s expanded her game, she’s a great transition passer and finisher too. I think one of the highest basketball IQs in the Big Ten. I think that really helps her find little gaps and ways. She’s uncanny, how she can get in space.”

NU was on cruise control after that second quarter, scoring 32 second-half points to the Badgers 30. Wisconsin never cut the lead under 20 points after halftime. The Badgers’ leading scorer Sydney Hilliard, who came into the game averaging 19 points per game on the season, got only seven points on Wednesday before exiting the game in the fourth quarter with an elbow injury.

“She’s really crafty,” McKeown said. “I thought Sydney and Veronica did a great job of just trying to cut down angles, keeping her in front of us. Just trying to frustrate her a little bit.”