Men’s Basketball: No. 19 Northwestern has no answers for No. 16 Michigan in second straight loss 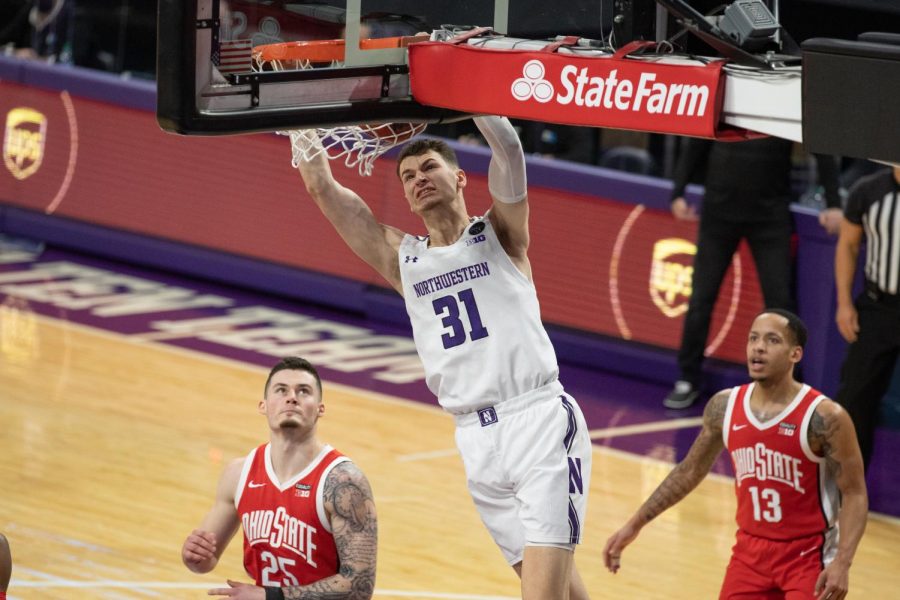 Northwestern has come back down to Earth. After a dream 3-0 start to Big Ten play, the Wildcats are winless in their last two — including a listless loss to No. 16 Michigan on Sunday.

The Wolverines’ 85-66 win was never in doubt, with a final scoreline that looked closer than the game actually felt. After a solid first four minutes keyed by an eight-point explosion from junior forward Pete Nance, NU (6-3, 3-2 Big Ten) failed to respond to an offensive onslaught by Michigan’s game breakers.

“A lot of people come in here and get beat,” coach Chris Collins said. “We came in, we had the right attitude, we gave it our best and we didn’t get the job done.”

The Cats struggled in the first half, facing exceptional three-point shooting from the Wolverines and stumbling into the break down 14 points.

Three-point shooting is normally one of NU’s biggest assets. The team entered Sunday averaging 42.7 percent from behind the arc on the season. After attempting just six shots from behind the arc in the first half, making two, the ice-cold Cats hit at a 3-for-12 clip in the second. In contrast, Michigan shot 12-for-27 from three.

“We tried to make a push at the end of the first half,” Collins said. “We cut it to five, and then they hit three threes. I thought that was the key moment of the game to push it to 13 at the half. We never really put any game pressure on them.”

Early in the game, Nance was the focal point of the offense, but after the under-16 timeout, he went to the bench, and no lineup put out by Collins generated anywhere near his level of production.

Sophomore forward Robbie Beran’s 12 early second half points, provided an offensive spark for the Cats. But he alone couldn’t force a significant shift in momentum. Michigan stretched the lead to as much as 29 points and Beran fouled out with five minutes remaining in the contest.

NU typically averages 37.3 rebounds per game, but grabbed just 28 boards on Sunday — to the Wolverines’ 42. Collins said Michigan’s size, with taller players at almost every position, presented a challenge on the glass.

“When we play these really good teams, when you give them second chance opportunities — they’re hard to guard on the first chance,” Collins said. “If you give them second and third chances, you’re going to be in for a long night. When we played well, we’ve done a pretty good job, we’ve held it even on the glass. Tonight, we didn’t do it.”

The Wolverines allow opponents to hit on just 38.2 percent of their twos, ranking third-best in the nation.

NU actually outperformed the average, hitting on 46.7 percent of its two point shots. But the Cats were still held to a season-low point total. And they were victimized by a star performance by guard Franz Wagner, who came up big for the Wolverines, chipping in with 14 points, five blocks and a team-high 10 rebounds.

To stay relevant in the Big Ten, the Cats must cope with opponents’ size defensively and offensively. With a game against another big and physical team in Illinois upcoming, they need to find out how — and quickly.

“We really haven’t seen that kind of size and physicality and length in any of our games that we’ve played yet,” Collins said. “I thought it really knocked us back.”