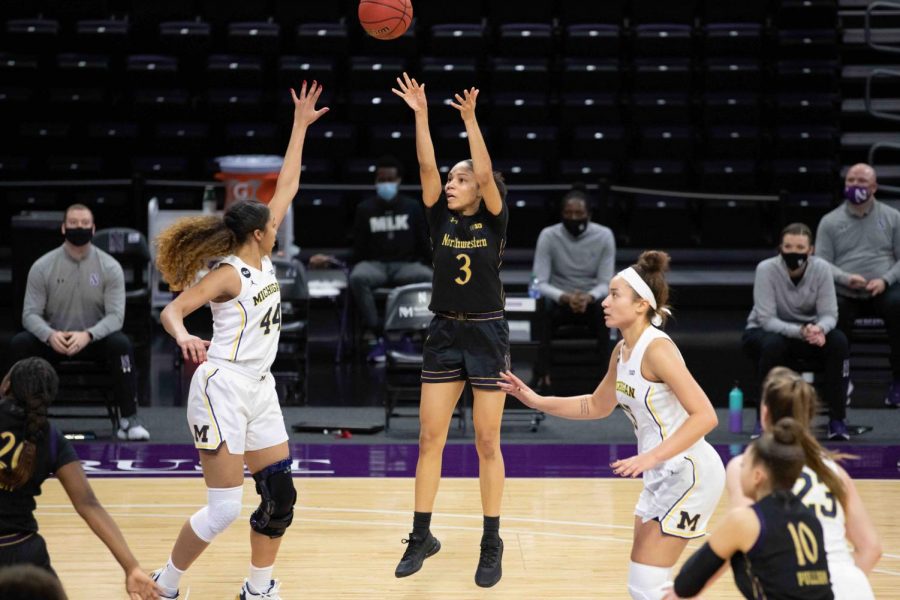 Sydney Wood puts up a jumper. The junior guard scored a team-high 19 points in NU’s loss to Michigan.

The good news for No. 15 Northwestern in Sunday’s critical home game against No. 16 Michigan? The Wildcats stuck to their hallmark of creating turnovers, forcing the Wolverines into 20 while committing just six.

The bad news? Just about everything else.

“If we’re going to play with the best teams in the Big Ten and the country, which we’re supposed to be one of, we can’t play like that,” coach Joe McKeown said.

The Cats had no answers for the post game of Wolverines forward Naz Hillmon. Hillmon, who scored 27 points at Welsh-Ryan Arena last season in a Michigan loss, had 26 on Sunday, 20 of which came in the first half. She was 10-for-14 from the floor, almost entirely in the paint. Fouling her didn’t work either — Hillmon was 6-for-7 at the free throw line.

Double-teaming Hillmon was also ineffective, because the Wolverines complemented her with a deadly barrage of three-pointers. They made seven of eight from beyond the arc in the first half, including all four attempts from guard Leigha Brown. Brown matched Hillmon with 20 first-half points, and Michigan shot 74.1 percent overall going into the break.

“Their size hurt us,” McKeown said. “You’re not going to stop (Hillmon). One thing that hurt us tonight was she was able to kick the ball out against our double teams, and they hit open threes. Michigan had us spread out pretty good, and they were on fire. They did a great job getting her the ball.”

The Wolverines dominated right from the tip, taking a 10-point lead less than four minutes in and forcing McKeown to call an early timeout. The only bright spot for NU at that point was junior guard Sydney Wood, who ended the game leading the Cats with 19 points, nine of which came at the foul line.

Senior guard Lindsey Pulliam was the only other NU player in double figures, with 13 points on just 5-for-14 shooting. Junior guard Veronica Burton, the Cats’ strongest player this season entering Sunday, connected on a mere three of 13 shots for just seven points, although she did accumulate six assists and four steals.

NU showed more fight in the second half, outscoring Michigan in the third and fourth quarters, but the Cats’ efficiency still wasn’t there. While the Wolverines made the most of their opportunities, shooting 63 percent for the game, NU was 22-for-71 — 31 percent. McKeown said he wants his team to make five or six three-pointers per game, but the Cats were just 3-for-19 in that department Sunday.

Last year’s Big Ten co-champions never lost consecutive games all season and had just four losses overall. This year, NU sits in a tie for seventh place after losing two straight games, and will need to regroup when it next takes the floor at cellar-dweller Wisconsin on Wednesday.

“We’re not going to change who we are or what we want to do,” Pulliam said. “We’ve just got to be better. That wasn’t us tonight, or the game before.”