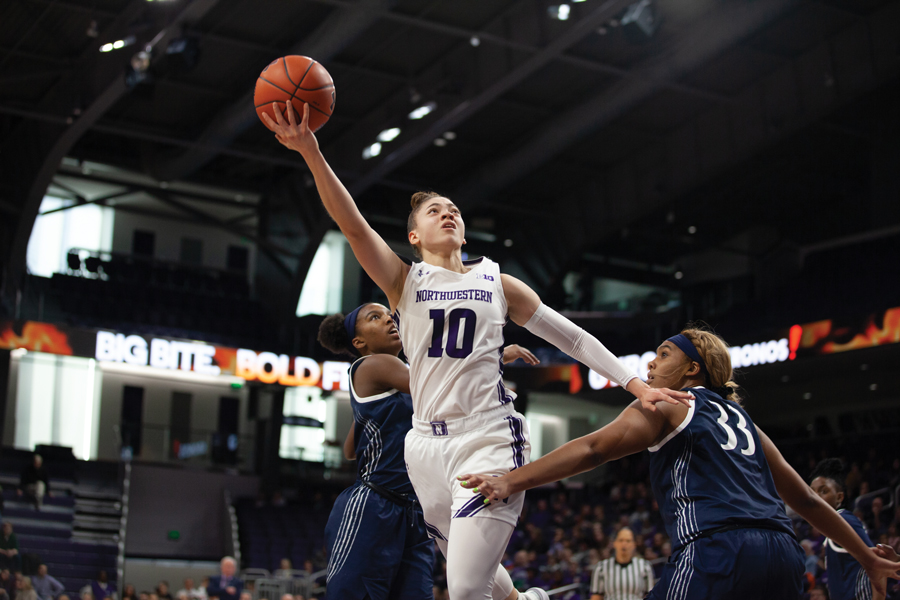 Lindsey Pulliam goes up for a layup. Pulliam was named to the mid-season Wooden Award Top 25 on Thursday.

Northwestern’s run to the Big Ten title last season began in earnest on New Year’s Eve, 366 days ago. That was the day the Wildcats sent a message to the conference and the country by beating then-No. 12 Maryland by 23 points in a game they controlled from tip to buzzer.

“It was a hard-fought game, but we really struggled in two areas,” coach Joe McKeown said. “We really got hurt on the glass, and we shot 10-for-22 from the foul line. Self-inflicted wounds, basically. It was really frustrating.”

The Cats led 38-36 after a fast-paced first half, but went colder than the 34-degree Nebraska afternoon in the third quarter. NU missed 16 straight shots from the floor in an 11-plus minute stretch that bridged the first and second halves, including 11 consecutive misses out of the break. After junior guard Veronica Burton gave the Cats some much-needed momentum with a layup to end the third quarter, NU missed its first five shots of the fourth as well.

Amazingly, the Cats weathered all that without letting the game get out of hand. The Cornhuskers built a nine-point lead with just under eight minutes left, but after finally breaking the lid on their basket, NU started chipping away. It helped that Haiby, Nebraska’s leading scorer, left due to a leg injury early in the fourth quarter, not returning until there were two and a half minutes remaining.

“The biggest thing was just hanging in there because we were doing a good job on the defensive end,” McKeown said. “They could have gone on a huge run, and we were able to guard them pretty well when we couldn’t score. But we can’t have those shooting droughts.”

The Cornhuskers still led by seven with three minutes to go, but the Cats tied it up with 1:40 remaining thanks to a layup by senior guard Jordan Hamilton. NU tied it again on its next trip down the floor, with Hamilton again laying it in. The Texas native had her best game of the year, with 12 points on 5-of-10 shooting.

Senior guard Lindsey Pulliam led the Cats with a season-high 19 points, but after NU got the ball back with 30 seconds left and a chance to win, Pulliam missed a mid-range jumper early in the shot clock, leading to Nebraska’s game-winner.

“I’m going to make that shot nine times out of 10,” Pulliam said. “Next time, I’m still going to shoot it… I’m confident in myself. I should’ve made the shot, even though I did take it early in the shot clock.”

The Cats entered Thursday leading the country in turnover margin, and they continued their prowess in that department, forcing 24 turnovers while committing just seven. That led to NU putting up 68 shots, compared to 54 for the Cornhuskers.

But despite that disparity, each team made 24 field goals, meaning the Cats shot 35 percent to Nebraska’s 44 percent. The Cornhuskers were 9-for-20 from behind the three-point line while NU was just 5-for-16, and as McKeown mentioned, the Cats shot less than 50 percent on free throws. Nebraska also outrebounded NU 47-35.

“They made a couple threes that really hurt us, and they made the play at the end of the game,” McKeown said. “We’ve got to shoot better, we’ve got to finish at the rim, we’ve got to make free throws and we’ve got to rebound.”