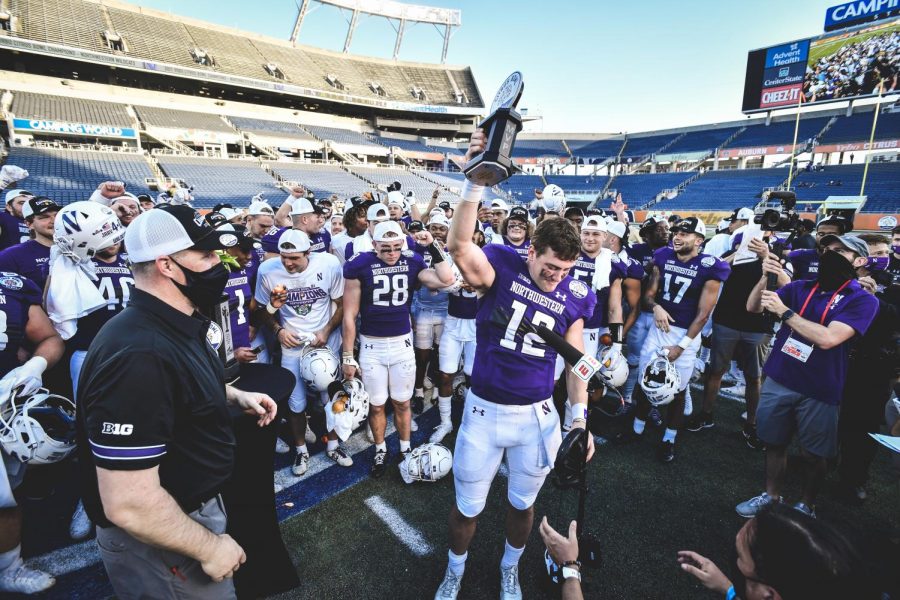 Up by one with less than two minutes remaining in the third quarter, Peyton Ramsey took a shot for the end zone.

The graduate quarterback sat in the pocket before sending a high-arching spiral to the front right corner of the endzone. Redshirt freshman wide receiver Bryce Kirtz reeled in the catch, but his feet were out of bounds.

So one play later, Ramsey used his legs to find the promised land instead.

On third-and-10 from the 30-yard line, he rolled out to his left to evade pressure. With no one in front of him, Ramsey sprinted downfield, weaving left and right around Auburn defenders before toe-tapping the sideline for a 30-yard touchdown run.

“They didn’t spy me, so I was able to get out in the open field and get into the end zone and play with that safety a little bit,” Ramsey said. “More than anything, I stepped out of the pocket, saw some green grass and took off running.”

The scamper highlighted the Cincinnati native’s stellar performance in the 2021 Citrus Bowl — his best in a Northwestern uniform.

Ramsey was named the game’s Most Valuable Player after completing 24-of-35 passes for 291 yards and three touchdowns and running for 50 yards and a score in the No. 14 Wildcats’ 35-19 victory over the Tigers.

Ramsey’s arrival in Evanston from Bloomington came with hopes of stability and leadership at the quarterback position. Those qualities were on display in NU’s fourth-consecutive bowl victory.

Ramsey connected with eight receivers — five of whom set or tied career-highs in receiving yards. He completed passes from the shotgun. He fooled the defense with play-action passes. He turned broken plays into positive yardage. These moves led to Ramsey throwing for the seventh-most yards in his college career and rushing for 50 or more yards for the seventh time. Most significantly, he accounted for 341 of the Cats’ 457 offensive yards.

“We wouldn’t be where we’re at today without Peyton Ramsey,” coach Pat Fitzgerald said. “Great leader. Great teammate. He stayed poised, he was gritty and when he needed to make plays, even with his feet, he was decisive.”

NU’s signal-caller opened the game on a tear, completing all five of his passes for 66 yards. The drive culminated with Ramsey faking a handoff to freshman running back Cam Porter, dropping back and rainbowing a pass to senior wide receiver Ramaud Chiaokhiao-Bowman for a 35-yard touchdown.

Two drives later, Ramsey got NU back into the red zone with 57 passing yards and six on the ground. He quickly found paydirt.

Rolling to his right, Ramsey found graduate tight end John Raine on a drag route, who stretched the ball across the pylon to give the Cats a two-touchdown lead.

At the end of the first quarter, he had 152 passing yards — 72 away from his season-high of 224 in the Big Ten Championship Game.

However, Ramsey’s level of play dropped in the second quarter, completing only four passes for 41 yards. Meanwhile, Auburn quarterback Bo Nix threw for 63 yards to help cut the Cats’ lead to 14-6 before halftime.

His fortunes slightly improved at the beginning of the third quarter, as Ramsey racked up 62 total yards on NU’s two opening drives. But they ended in a punt and a failed fourth-down conversion.

Then, like the bright sun shining on Orlando’s Camping World Stadium, Ramsey delivered rays of energy into the Cats’ offense.

With the score 14-13, Ramsey opened the possession by finding Raine — who finished with a career-high six receptions for 67 yards — on a 30-yard catch. Then, he connected with Chiaokhiao-Bowman for seven yards. Five plays later, Ramsey found the end zone for the third time.

“He’s like having a coach out there on the field,” Fitzgerald said. “He’s really just so unflappable.”

With less than eight minutes left in the fourth quarter, Ramsey all but clinched NU’s victory when he connected with senior wide receiver Riley Lees on an eight-yard touchdown to make the score 35-13.

During the final seconds of the Citrus Bowl, Ramsey stood on the sidelines with his helmet resting on his head and his hands on his hips. As senior quarterback TJ Green took the final snaps of the Cats’ season, his fellow signal-caller looked out at the field, soaking in the final moments before sweet victory.

All Ramsey could do was smile as he raised his MVP trophy triumphantly in the air, surrounded by exuberant teammates and the large championship trophy filled to the brim with orange and yellow citrus fruits.

There is a chance that Friday’s game was Ramsey’s last in college football. If so, he made sure to go out in style.

“We had a blast,” Ramsey said.