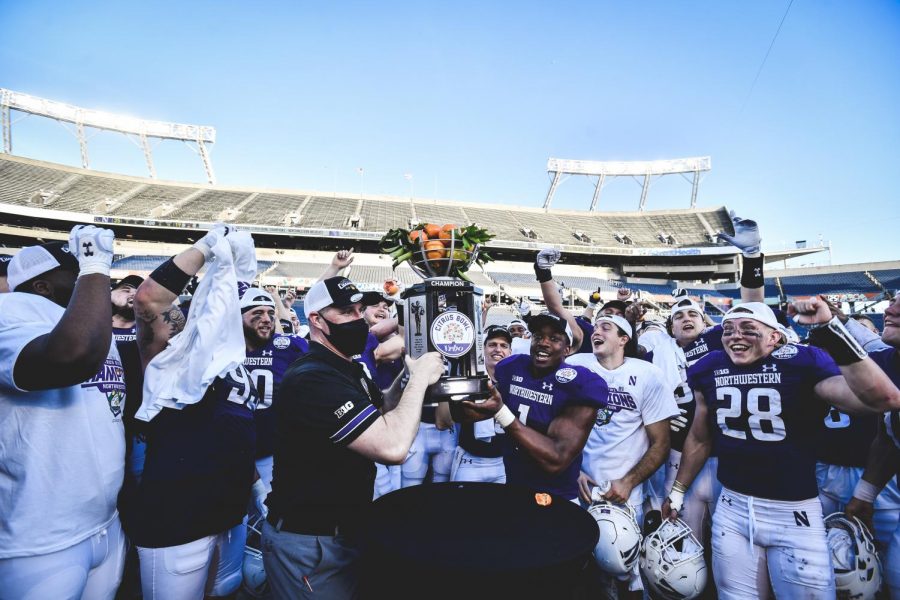 The last time Pat Fitzgerald took a trip to Orlando with Northwestern, as a senior linebacker on Gary Barnett’s 1996 Wildcats team, he watched a quarterback named Peyton pass and throw his way to a Citrus Bowl victory.

When Fitzgerald returned to the Citrus Bowl this year, he got to watch his own team’s quarterback named Peyton do just the same.

Behind Peyton Ramsey’s best performance in an NU uniform, the Cats (7-2, 6-1 Big Ten) clinched their fourth-straight bowl win and the 400th of defensive coordinator Mike Hankwitz’s career with a 35-19 takedown of Auburn (6-5, 6-4 SEC) on New Year’s Day.

Ramsey threw for a season-high 291 yards and scored four touchdowns in the win. On the opposite end, the Tigers’ 19 points were the fewest allowed by NU in a bowl game since its first-ever — the Rose Bowl in 1949.

“Our guys came down here to play physical, Big Ten football,” Fitzgerald said. “We put our brand of football on display for the entire country, and made a pretty strong statement against a team that was ranked in the Top 10 earlier in the year.”

The Cats opened the game with a score on their opening drive for the seventh time this season. Ramsey’s first throw of the afternoon came for 10 yards to fellow graduate transfer John Raine, and five plays later he found senior wide receiver Ramaud Chiaokhiao-Bowman in the end zone for a 35-yard touchdown pass, his longest of the season.

That series set the fast-paced tempo NU would play with on both sides of the ball for the remainder of the first half. Auburn, playing without its star co-SEC Freshman of the Year running back Tank Bigsby, went three-and-out on its first two possessions of the afternoon.

NU found the end zone again on its third drive of the game, moving the ball 68 yards down the field in 10 plays and scoring on a six-yard pass to Raine. The first quarter was one of the best of the Cats’ season: Ramsey went 11-for-14, with eight of those completions good for nine or more yards, and totaled more than half his average season yardage in just 15 minutes.

“It’s just taking what the defense gives you, taking advantage of those matchups,” Ramsey said. “Our guys did a really good job of getting open today.”

The Tigers managed to make some offensive moves in the second quarter. Quarterback Bo Nix took his team across midfield with three consecutive completions, but once nearing the end zone, could only muster an incompletion and a pass for negative yardage. Auburn was forced to settle for a field goal for its first points of the afternoon.

Nix started to find a relative rhythm as the clock approached the halftime break, leading the Tigers on a 15-play drive and threatening to pick holes in the Cats’ defense. Already without All-Big Ten third-team defensive end Eku Leota, who entered the transfer portal last month, and NFL Draft-bound cornerback Greg Newsome, NU’s defense was almost depleted even more when officials called senior safety J.R. Pace for targeting with four minutes left in the half.

The call was reversed, though, and even as Auburn got the ball all the way to the Cats’ 5-yard line with less than a minute to go, NU came up strong on three straight plays — a Cam Mitchell pass breakup on first down, a Nix overthrow into triple coverage on second and an incompletion on third — to make the Tigers settle for another field goal going into the break.

“We’ve always said that field goals won’t beat you very often,” Hankwitz said. “So you’ve got to rise up and respond, and (the defense) just did a phenomenal job.”

Auburn had the ball to open the second half, and while NU’s defense kept it to another three-and-out on that opening drive, the Cats’ offense struggled out of the intermission. Ramsey took his only sack of the afternoon for a loss of seven yards, and NU was forced to punt it back to the Tigers four minutes into the third.

Nix found his groove on the ensuing possession, finding wideout Elijah Canion on a 57-yard deep ball that gave Auburn its first touchdown of the game. Nix’s pass was the second-longest NU’s defense gave up the entire 2020 season — the first came at the start of the Michigan State game, and knocked the Cats into a position from which they couldn’t recover — and all eyes were on how NU would respond once it had the ball.

The Cats answered well. Ramsey found Raine twice on the next drive, the first to convert a third down and the next for 21 yards. NU came up short on that series’ fourth-down conversion attempt, but its defense gave it a boost — senior linebacker Paddy Fisher stopped Auburn rusher J.J. Pegues on a third-and-short down the middle, forcing the Tigers to punt.

“It goes back to Coach Hank and him drawing up the third down calls throughout the week in preparation for the game,” Fisher said. “(It) put us in great position to make the play, and we did a very good job executing.”

Ramsey followed through on the next drive, finding an open hole on a third-and-10 to run 30 yards straight into the end zone and put the Cats up 21-13.

NU’s defense came up with two more huge fourth-quarter stops, and its offense made good on both. Fisher and Gallagher took down Nix on fourth down at the 50-yard line for a turnover on downs at the final frame’s start; on the offensive end, the Cats gave the ball to freshman running back Cam Porter — who’d managed only 26 yards up until then — for seven straight runs, and the rookie took it right into the end zone for NU’s next seven points.

The Cats forced a fumble on Auburn’s next drive, and turned that into another score on an eight-yard completion from Ramsey to senior wide receiver Riley Lees.

The Tigers scored one more touchdown by the final whistle, but by the game’s closing minutes, most eyes were on the Cats. Longtime athletic director and soon-to-be ACC commissioner Jim Phillips roamed between the tents and the medical tents in his white shirt and purple tie for the last time.

Hankwitz, in his iconic gold short-sleeved pullover, received a celebratory Gatorade bath — remarkably, his first after a national-record 580 games as a coach in college football.

Sixth-year senior quarterback T.J. Green and senior running back Jesse Brown came in for NU’s final string of plays, a fitting gesture to cap the careers of the only class in program history to win four bowl games.

And this season’s Dodd Trophy Coach of the Year took it in from the sidelines, quick to divert the credit and the attention toward his players and especially his defensive coordinator.

Friday marked exactly 24 years to the day since Northwestern’s last Citrus Bowl appearance, Fitzgerald’s final game as a player. He and his program had come a long way since Jan. 1, 1997.

“I remember just how hard the heavy lifting was to get to one (bowl), and then to get our first bowl win,” he said. “And now to get to four straight. The credit goes to our players and our staff. I’m so incredibly proud of them and thankful for them.”