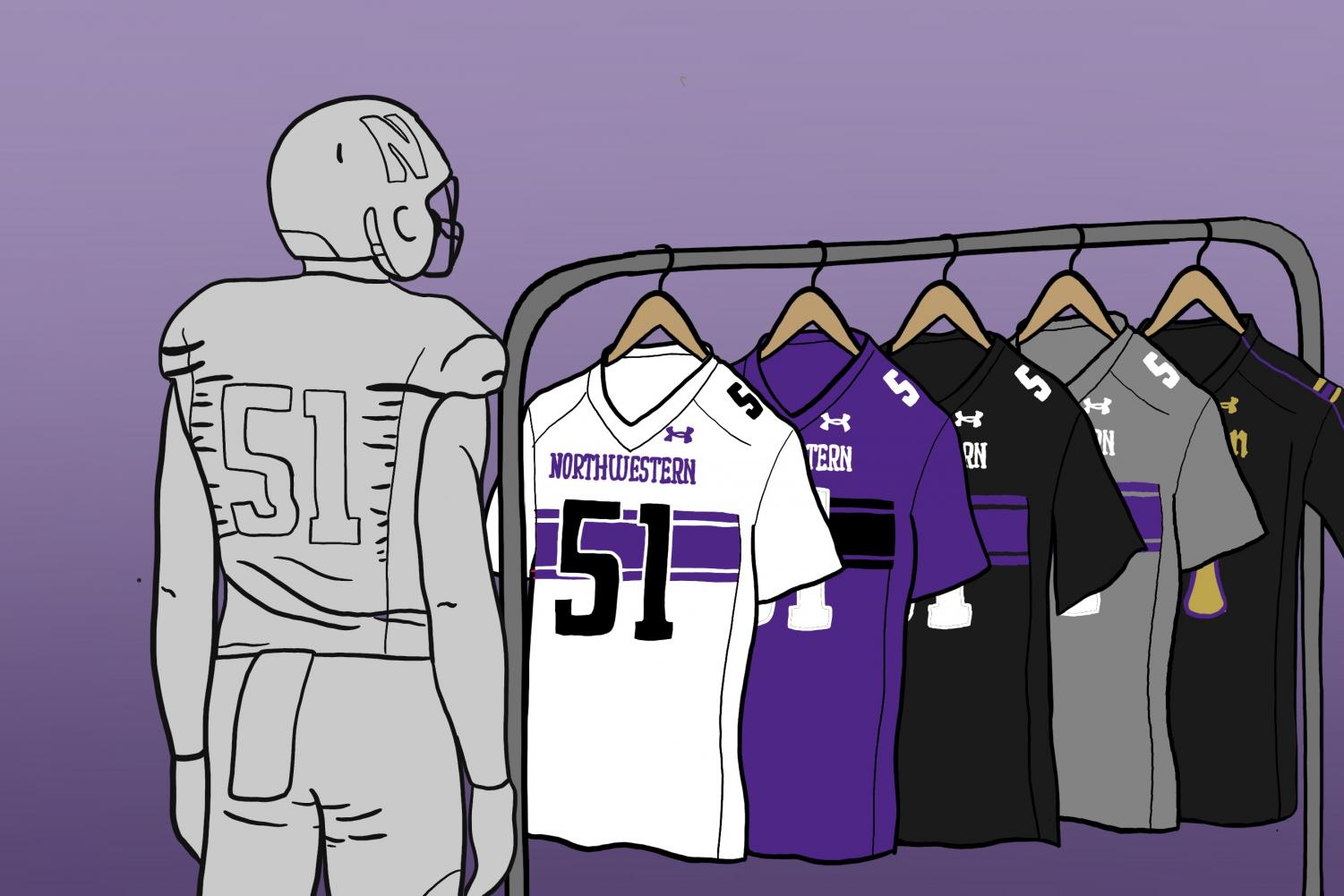 When it comes to uniforms, Northwestern has a host of helmet, jersey and pants options to mix and match. (Illustration by Carly Schulman)

When it comes to uniforms, Northwestern has a host of helmet, jersey and pants options to mix and match.

Football: Nearly 10 years into its Under Armour deal, a deep dive into Northwestern’s uniforms

Social media can offer only so much insight, but in this case, that tweet — of the program’s popular Gothic-inspired black-and-gold uniform and helmet set, framed against the ivy of Deering Library — proves a point. The Wildcats’ uniform game has become an integral component of its brand, as recognizable and associative as Ryan Field or Willie the Wildcat.

This year marks the ninth full season of Northwestern’s partnership with Under Armour, a stretch that’s coincided with the football program’s most successful era. Sixty-five wins, two Big Ten West titles and six bowl games have been accompanied by 30 distinct uniform combinations, 23 different helmet designs and a wave of national attention brought not just by on-field success, but on-field attire.

For each of their last 64 games — a streak that dates back to the end of the 2014 season — the Wildcats have come out each week wearing a different uniform combination than they wore the week before.

They have a wide slate of options to mix-and-match: base jerseys and pants in purple, white, black and gray; helmets in purple, white and black that can be customized with an array of decals and facemask colors; notable alternates, like the Gothics, and occasional Under Armour custom get-ups, like those worn in last year’s matchup against Wisconsin.

It’s a stark contrast from the days, and the uniforms, of old for Northwestern. In the school’s final three seasons partnering with Adidas from 2009 to 2011, the Wildcats wore six different uniform color combinations — most commonly, purple helmet, white jersey and white pants on the road, and purple helmet, purple jersey and black pants at home — and only veered from their traditional purple helmet once in 39 games.

That all changed once Under Armour joined the party.

In 2012, the first season of the new apparel deal, Northwestern wore six different uniform combinations and four different helmet designs. Under Armour resurrected the “Northwestern stripe,” a feature first pioneered by the program in 1909 and adopted by many others in college football over the years, as noted by blog HailToPurple’s extensive uniform history. “Reclaim the Stripe!” was the slogan of the sponsorship’s first offseason marketing campaign.

The deal, whose figures weren’t publicly reported but at the time were estimated to be worth more than $3 million annually, was one of the first major moves made by athletic director Jim Phillips, and arguably set in motion many that would come in the future. The announcement of coach Pat Fitzgerald’s 10-year contract extension in 2017 aptly took place at the Under Armour Brand House on Michigan Ave. in Chicago.

The relationship between the two parties was symbiotic: Under Armour got a proving ground as it made its foray into the Big Ten and college athletics, and Northwestern got a way to build its brand on something more than history, that would excite fans, recruits, television audiences and apparel blogs alike.

“We’ll have, in my opinion, the most cutting-edge uniforms there are in the country, the lightest that are going to allow our guys to play faster,” Fitzgerald said in an interview with Crain’s Chicago Business in 2012. “To be the first Big Ten team with Under Armour gives us a chance to really separate ourselves from our peers here in the conference.”

Northwestern and Under Armour became even more inventive and creative with their uniform looks after that first season. The team wore non-purple helmets, first in black, then in white, for the first time in decades. It debuted new alternate uniforms, with some hits and misses — the oft-acclaimed Gothics, first worn against Nebraska in 2014and the oft-panned and purple-less U.S.A. uniforms of 2013.

Since 2011, the Wildcats’ two most frequently-worn color combinations — in order of Jersey-Pants-Helmet — are the Purple-Black-Purple and the White-White-White, worn 15 and 12 times, respectively.

The former is what Eryk Jackson, who oversees equipment operations for the football team, calls the program’s “new modern traditional look,” a progression from the black jerseys, purple pants traditionally combination sported in the pre-Under Armour era. The all-whites debuted in the 2013 season opener — the first time the Wildcats wore that color set since 1980 — and have since continuously been a player favorite.

There may not be a scientifically-proven correlation between uniform combinations and win percentage, but Northwestern has had more success on the field when wearing some combinations than others.

While previous win percentages may not factor into the jersey choices, there is a yearly process behind Northwestern’s uniform combination selection. Jackson oversees that task, and alongside a player representative from the program’s Unity Council, creates a set list of which uniforms the team will wear each week in August, well before the start of the actual season.

It’s Jackson’s job to balance the player and team input with his perspective of what’s best for the equipment staff. Those logistical considerations range from which helmets to wear in which games — Northwestern usually aims for three to four uses out of each of its three helmet colors — to when to wear white pants — usually not at home, and usually toward the end of the year, so they aren’t all ruined by grass early.

And then comes the player input, relayed this year by senior wide receiver and official uniform liaison Ramaud Chiaokhiao-Bowman. In his five years in Evanston, Jackson has watched the trends of what the team likes to wear most change — “the minute you think you know, you don’t know,” he says.

In some years, it’s the Wildcat logo helmet. In many years, it’s the all-white uniforms, a popular choice for favorite combination by players and a frequent contender for look of the week on specialty uniform accounts across Twitter and Instagram.

These days, Jackson has found that the players interestingly are most excited not about the jersey and pants colors, but instead of each game’s socks and tights, features that they have the most opportunity to accessorize in their own style.

The shortened nature of this 2020 season has allowed Jackson and his equipment staff some room for experimentation when it comes to uniform combinations and designs.

The Wildcats rolled out a new purple-and-black helmet decal for the Michigan State game on Nov. 28, one that the equipment staff had initially planned to deploy in 2018 but hadn’t had the chance to use until now. The team had planned to wear a white jersey, purple pants, purple helmet combination against Minnesota, but when that game was cancelled, pushed it to the Big Ten Championship Game instead.

On Oct. 31 against Iowa, Northwestern reintroduced a white facemask to its helmet, a feature it hadn’t worn since 1990. The debut was a hit among players and fan base alike, and was worn again on the purple helmet against Wisconsin and Ohio State later in the season.

The resurgence of the white facemask — somewhat like the return of the Northwestern stripe in 2012 — is another example of a common crux of the Wildcats’ run with Under Armour thus far: resurrecting time-worn staples and designs for a modern Northwestern.

“The white facemask on the purple helmet is not a new look for Northwestern, but it’s new for this generation,” Jackson said. “It kind of revitalizes the program in terms of doing something new, even if it’s not really new.”

The Wildcats will wear the white facemask again on Friday in the Citrus Bowl against Auburn, the 12th time they have faced off against a fellow Under Armour school since 2012, and the second in a bowl game.

Under Armour has substantially grown its list of college sponsorships since the Northwestern deal — it now partners with Wisconsin and Maryland in the Big Ten, and has a lucrative $90 million deal with regional rival Notre Dame.

The brand did cut its ties with a number of schools, including Cincinnati, UCLA and Cal in the wake of the pandemic this year, but an athletic department spokesman told The Daily this summer that there had been no changes to Northwestern’s partnership.

The trend of trying out new features this season will continue in Orlando. The Wildcats will wear a white helmet in a bowl game for the first time in history — in their previous 15 bowl games, they were 4-0 in black helmets, and 1-10 in purple.

They’ll take the Camping World Stadium field in purple jerseys, white pants and white helmets, a color combination in which they’ve gone 3-3 since 2012, and harkens back to uniform sets worn in the program’s 1960s heyday.

To brave the South Florida heat, Fitzgerald and his staff will roam the sidelines in shorts for the first time since last year’s Stanford loss.

Fitzgerald’s personal philosophy on in-game looks is pretty standard — “I wear shorts when it’s hot, slacks when it’s nice, and sweatpants when it’s cold, and whatever the guys want to wear, I’m cool with,” he said earlier this season. But the Wildcats are 5-5 in the Under Armour era when Fitzgerald suits up in shorts, so in addition to seeking a fourth-straight bowl win and win No. 400 for defensive coordinator Mike Hankwitz, they’ll be looking to take that particular record above the .500 mark.

Whether Deion Sanders’ legendary “if you look good, you feel good, and if you feel good, you play good” mantra holds up scientifically is up for debate. But with the majority of Northwestern’s wins in the Fitzgerald era — 65 of 105 — coinciding with the school’s Under Armour era, maybe there’s some truth in that logic.

“Obviously, you want to be cool. And I’m not very cool,” Fitzgerald told Crain’s in 2012. “So if I can wear cool clothes, it gives me a chance.”