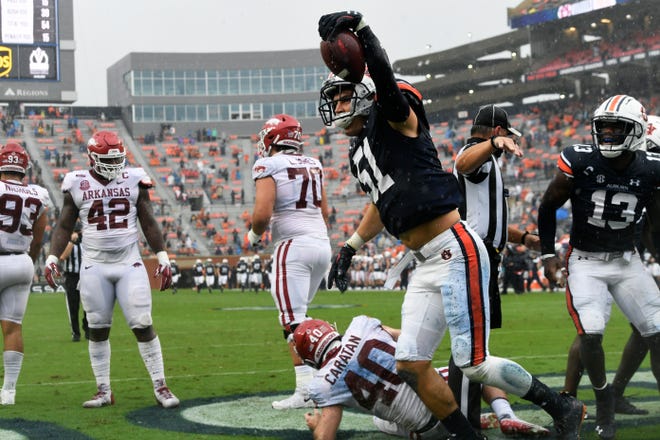 Auburn linebacker Barton Lester (51) reacts after scoring a touchdown on a blocked punt against Arkansas on Oct. 10, 2020.

Two weeks after losing to Ohio State in the Big Ten Championship Game, No. 14 Northwestern is in Florida to face off against Auburn in the Citrus Bowl.

The two teams have only faced off once before — in the memorable Outback Bowl in 2010, which ended in a 38-35 Tigers win. Auburn finished the 2020 season third in the SEC West with a 6-4 record, and after firing head coach Gus Malzahn earlier this month, will enter the Citrus Bowl with defensive coordinator Kevin Steele at the interim helm.

The Daily spoke with Nathan King, the Auburn beat writer for 247Sports, to get the scoop on what to know about the Tigers ahead of Friday’s bowl game.

The Daily: Obviously, the late-season coaching change is a big storyline for Auburn. For some context first, why did that come about, and what kind of effect do you think all the coaching news — Malzahn’s firing, the hiring of Bryan Harsin — has had on the program heading into the Citrus Bowl?

King: The program is excited to be heading in a new direction, and most fans think Harsin to be a really good hire. It’s hard to find many reasons to say otherwise. But the timing of the coaching change will make this a difficult game to win for Auburn.

Gus Malzahn was a great coach; his accomplishments added to Auburn’s rich history, and some of his best victories will be remembered by fans as some of the greatest games the Tigers have ever played. And he became the first coach in program history to have the team ranked in the AP Top 25 at least once in eight straight seasons. He also never had a losing record in eight years.

But it was becoming less about the numbers of games won and lost and more of how those games looked. Auburn for the past four years or so has fallen victim to the same offensive inconsistencies over and over again, the quarterbacks weren’t developing even after multiple years in the system, and — what I think did Malzahn in the most — he went 0-12 on the road against Auburn’s biggest rivals in Alabama, Georgia and LSU.

Fans at other schools laugh at that number because it’s hard for anyone to beat those teams anywhere, especially the first two. But the problem was, again, the way Auburn looked in those games. You could chalk up a couple of blowout losses in Tuscaloosa and Athens before the season even started, regardless of how good both teams were supposed to be. It’s exactly what happened this season.

The program needed new life. Malzahn kept Auburn’s floor high, but the thought was that his flaws as a coach were going to hold the Tigers back from greatness. Harsin may stumble more than Malzahn’s teams, but Auburn is willing to risk that in order to raise its ceiling.

As it relates to the bowl game: You already had the challenge of Auburn’s players heading home after their final regular-season game on Dec. 12 and only returning to campus for practice over the weekend. That’s compared to Northwestern, which transitioned smoothly from the Big Ten championship game into bowl prep, with players only going home for a couple days.

Many players were distraught over Malzahn’s firing; he was loved deeply by those he coached. Combine that with the limited prep time and a top-15 opponent, and this is not shaping up to be a great scenario for an Auburn victory on Friday.

The Daily: Quarterback Bo Nix and running back Tank Bigsby are Auburn’s two big names on the offensive end. How important have they been to this Tigers team this year?

King: Nix is obviously the most important player, seeing as he’s started every game at quarterback for the past two seasons. Bigsby, on the other hand, is the Tigers’ best player on that side of the ball. The SEC Freshman of the Year ran for more than 800 yards despite only being fully healthy and available in six games. I think he’s a generational talent at the position for Auburn.

Nix didn’t take that sophomore step many hoped he would under first-year offensive coordinator Chad Morris. Much of that can be chalked up to a rotating door along the offensive line due to a myriad of injuries.

He has flashes where he looks like an elite QB — you’ll undoubtedly see them in this game. He also makes head-scratching decisions. Those will surely be on display in Orlando against Northwestern’s strong defense, too.

For all his faults, Nix makes Auburn’s offense go, and he’s above average in most games. Auburn fans hope Harsin will bring in an offensive coordinator and quarterback instructor who can finally tap into that five-star potential and make Nix one of the nation’s top signal-callers.

The Daily: The Auburn defense has seemingly struggled in 2020. What insight can you give about that side of the ball?

King: Multiple injuries hindered every level of the defense in every game. Senior pass-rusher Big Kat Bryant wasn’t fully healthy until this month. All-SEC linebacker K.J. Britt was knocked out for the season in Week 2. Starting cornerback Jaylin Simpson hasn’t been fully healthy since a Week 1 injury. Safety Jamien Sherwood suffered an ankle injury late in the year. Nickelback Christian Tutt was injured in the home finale and won’t play in Orlando.

This is one of the more talented defenses in the country, and they had a long stretch in the middle of the season where I thought they were impressive. Auburn gave up yards, sure, but the Tigers’ ability to get stops in the red zone at the end of drives and often come up with back-breaking turnovers still made them a feared group.

They struggled at the end of the year against two top-5 teams in Alabama and Texas A&M. The Crimson Tide did, well, what it does against everyone, and the Aggies dropped more than 500 yards of offense on Auburn’s home field.

Northwestern isn’t exactly a firecracker on offense, so I’ll be interested to see how defensive coordinator Kevin Steele’s unit performs in what will likely be the final game for many of its players.

The Daily: Aside from Nix and Bigsby, who are some other Tigers of note who Northwestern will have to keep an eye on?

King: Sticking with the defensive side of the ball, Zakoby McClain has been wildly impressive this season. The junior linebacker began to carry an extra load after Britt’s injury and hasn’t disappointed, racking up more than 100 tackles on the year.

He’s a freak athlete who can fit a gap as quickly as he can hit a tailback in space. He’s also fired up about getting snubbed on the All-SEC team. I look for him to have a big game as Auburn hopes to stop the run first and foremost.

With receiver Anthony Schwartz not playing in the bowl on offense, I’ll go with Seth Williams. The 6-foot-3 junior is liable to miss a defensive back every other game, and if he and Nix start to get humming, they can be an unstoppable tandem. Northwestern can’t let Williams get cooking.

The Daily: Are there any Auburn players who might miss the Citrus Bowl for injury, transfer, COVID, etc. reasons?

King: Schwartz, the speedy, junior receiver, opted out of playing in the game and didn’t return to campus for practice. It appears Sherwood, an NFL hopeful at safety, did the same as to keep his ankle healthy. Tutt won’t play either in the secondary.

And Bigsby is questionable for undisclosed reasons. That could be medically related (he had a couple nagging injuries this season) or a personal decision.

On top of the big four, there will likely be a handful of others obviously out with COVID-19 and maybe a couple more opt-outs. Those are the biggest names we’re aware of at the moment.

The Daily: What does Auburn need to do to get a win in Orlando?

King: Somehow look way better on offense than they have recently. Over their past six quarters, the Tigers blew a lead to Texas A&M at home and nearly lost to Mississippi State because of how bad their offense performed.

Nix is getting little time to throw behind a shuffled offensive line. Bigsby continually serves as the only consistent bright spot.

I think Auburn’s defense will play well as it has for most of the season against average offenses, so it’s up to Nix and company to create some lightning and relieve some pressure from the defense by contributing to the scoreboard.

But, again, with a short week of preparation, without a few players and without the normal routine from their offensive-minded head coach in Malzahn, I’m not holding my breath.

King: Auburn was a good team this season. A 6-4 record wasn’t enough to retain Malzahn, and the loss to South Carolina was ugly, but the Tigers still finished behind only Alabama, Texas A&M, Georgia and Florida in terms of total wins against a 10-game, SEC-only schedule. I don’t entertain talk of this being a bad team.

There’s high-level talent on both sides of the ball, and there’s probably an NFL player in every position group. But given all the circumstances, how good Northwestern has been on defense this season and how much more motivated I think the Wildcats will be to be playing in this game, I’m not seeing many scenarios where Auburn comes out on top. Northwestern 24, Auburn 17.