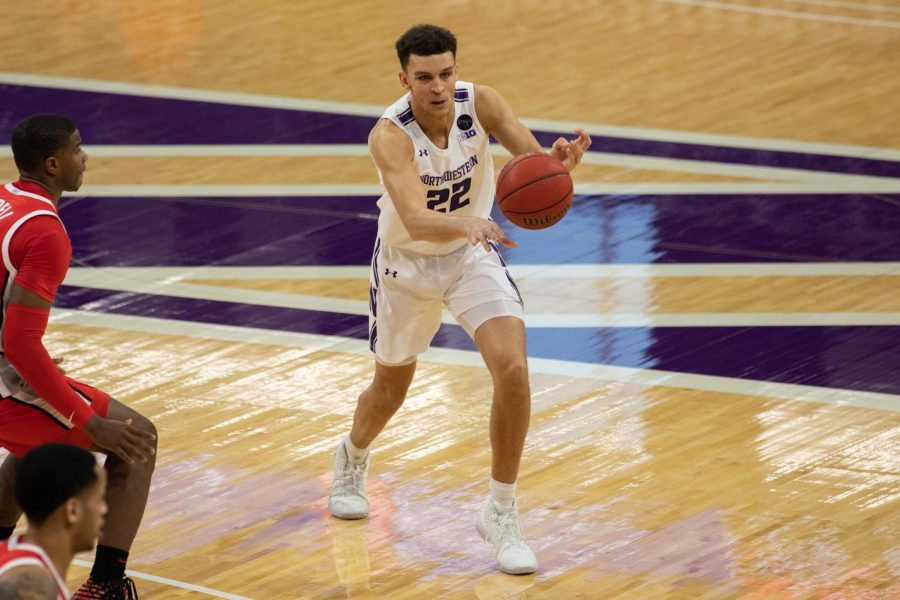 Pete Nance passes the ball. The junior forward scored a career-high 21 points against No. 10 Iowa.

The turning point in Tuesday’s loss to No. 10 Iowa was, of all things, Pete Nance saying “gimme that s—.”

Northwestern (6-2, 3-1 Big Ten) pulled within five points before the junior forward, after blocking a layup in transition, had some words to say on the rebound, and was called for a technical foul. The technical was controversial, especially because a Hawkeye player, forward Patrick McCaffery, used the same phrase earlier in the game, and no foul was called.

“The technical was a key point in the game,” coach Chris Collins said. “Obviously, I didn’t hear — it was on the other end. It’s a great official crew. We’ve got to go with what they call, but that was a real turning point possession.”

That one play resulted in a four-point swing to boost the Iowa lead to nine, and the Wildcats never quite recovered.

After the technical, Iowa outscored NU 22-12, led by guard Jordan Bohannon, who shot 6-for-9 from behind the arc, and scored 11 of those 22 points.

“From when the technical happened on, we just could never get that last push,” Collins said. “We were right there. I thought we did a lot of good things, but give Iowa credit. They had some guys that made some big shots to give them that separation. We could never make that final push in the last eight minutes.”

Nance was the best player on the floor for the Cats for most of the night. He scored a career-high 21 points, with 17 coming in the first half. Every time he entered the game, he was an immediate spark plug for an NU offense that struggled to find shots.

The technical foul was not the only thing that went wrong for the Cats on Tuesday. They turned the ball over 12 times, and many of those turnovers were self-inflicted. In one sequence, after NU pulled within four points, sophomore guard Chase Audige traveled, and then junior forward Miller Kopp double dribbled, and then sophomore center Ryan Young traveled.

Not everything went awry for the Cats on Tuesday. The defensive effort of preseason All-American Luka Garza broke his 18-game streak of scoring 20 points or more in conference matchups.

Nance emerged as a shot creator who can find and facilitate offense, like Audige, Kopp and sophomore guard Boo Buie, who have each had big moments in the past weeks’ games.

Winning on the road in the Big Ten is challenging — the only Big Ten team with a winning record on the road so far this season is Michigan, who has played just one road contest against Nebraska. But the self-inflicted errors, culminating in the technical foul, kept NU from taking down one of the conference’s best teams.

“It’s the little things that determine whether you win or lose,” Collins said. “We can’t get a technical there. Whether you agree with it or don’t agree with it, you can’t. It’s an important part of the game where we just can’t have that.”

—Men’s Basketball: Northwestern seizes a win over No. 23 Ohio State in closing minutes